Alanis Morissette on Bringing ‘Jagged Little Pill’ to the Stage

Alanis Morissette didn’t want her landmark album Jagged Little Pill to become a bio-musical. So when producers approached her eight years ago about bringing the music to the stage, she had some requests.

“I was flattered and my initial thought was, is it going to have to be my story? Because that’s terrifying. Maybe one day I’ll have the audacity to share it in another form,” said Morissette at a launch event for the musical in New York. “The last thing I wanted to do — to be transparent — was any kind of a jukebox musical or anything that felt compartmentalized or separate.”

The cast and creative team gathered at Haswell Green’s in Midtown on Tuesday night to share songs from the show and to talk about the genesis of the production. The musical premiered at American Repertory Theatre in Cambridge, Massachusetts, last summer and is scheduled to start performances on Broadway in November.

A.R.T. artistic director and Tony winner Diane Paulus stages the new musical, which has a book by Diablo Cody, a 2008 Oscar winner for her original screenplay for Juno.

Paulus says everyone came to the project “like a calling,” as the album had been formative for so many. Produced by Glen Ballard, who co-wrote most of the songs with Morissette, the 1995 Maverick release topped the charts in 13 countries, spawning a string of hit singles and notching up sales of over 33 million copies.

The show takes those songs and weaves them through a timely, female-driven story about characters dealing with issues ranging from addiction and gender identity through sexual assault. The songs take on new life onstage, yet retain their inherent drama. “You Outta Know” is still an anthemic breakup song, and “All I Really Want” becomes an opening “I Want” song for a family struggling to communicate.

“I have learned more from Alanis and the thoughts she’s given me and the books she’s told me to read about understanding, which is key to this musical,” Paulus said. “We cannot heal anything that we are hurting about if we’re alone. Everything is done in relationship to other people and that is fundamental to what she’s given us.”

Cody crafted a story by zeroing in on characters that already existed in the album. She started with the central figure of Mary Jane from Morissette’s song of the same name. In the musical, Mary Jane is a mother struggling with addiction and mental health, distancing herself from her marriage and children.

“That song tells you everything you need to know about that woman, and so I was able to build it out from there,” Cody explained. “I just feel very fortunate to have this incredible, theatrically rich, beautiful source material to work from. It’s not a typical jukebox musical situation where you’re thinking, ‘How can I shoehorn this hit into the story?’”

Cody also praised the theatrical process, saying “I come from a world where reshoots are costly and shameful,” while Paulus likened making theater to “reshooting every day.” 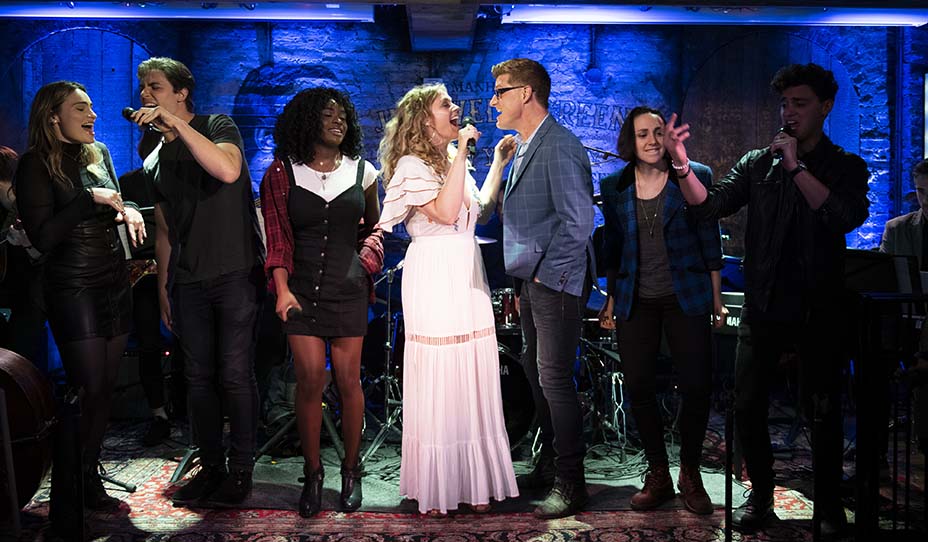 The creative team was hesitant to make too many changes after the overwhelming response to the show at A.R.T. (people camped out for tickets and came from all 50 states and 26 countries). But Paulus says they held creative summits and a three-week working session with the cast to fine tune the material.

“The show at its core is the same, but it really just went cleaner into the throughline of the narrative,” noted the director.

Pulitzer Prize winner Tom Kitt (Next to Normal) helped reinvent the music for the stage as orchestrator and music director. Kitt has a track record of translating popular music for the stage and screen, with Green Day’s American Idiot and the Pitch Perfect movies. One of his creations for the show is a mix for the finale of Morissette’s “You Learn” and “Thank U,” which is lifted from a later album. In addition to tracks from other albums, like “That I Would Be Good,” the musical also incorporates two new songs by Morissette: “Smiling” and “Predator.”

“The great challenge with working on something like this is of course you’re working with an iconic, brilliant masterpiece and everyone’s going to know what you did,” Kitt said. “So there was no hiding.”

For Morissette, “God is in the details,” and her focus in rehearsals was on the subtleties in the story. Paulus recalled a time when the singer came to rehearsals and gave notes on a scene where Mary Jane is waiting in line at the pharmacy. Morissette felt the actors playing the people waiting in line weren’t empathetic enough to the issues Mary Jane was facing.

“The more overt expression is slam-dunked and to know that every layer has deep profound care for it coming from all of us is pretty awesome,” Morissette said.

The process has also been healing for the singer-songwriter. She recalled how lonely she felt performing the album in concerts after its release, still feeling the anger of songs like “You Outta Know.” She says it has been cathartic to see the music take on a new life onstage.

And even though the album came out in 1995 and the team has been working on the show for eight years, Paulus says it feels more relevant today than ever. In the A.R.T. production, there was a protest scene with #NeverForget posters, and the director says even more can be incorporated now.

“When we first sat down to listen to the album together it was pre-Trump, and then Trump was elected,” Paulus said. “Then we made the show and we did it in Boston and then the Kavanaugh hearings happened. We started the show before the #MeToo movement happened. So we were tracking all these things with our show and vibing with them and dealing with things that were coming up and then bringing it to rehearsal. And just going deeper and deeper and deeper.”

To that, Morissette responded, “Yeah, where else?”

— Jagged Little Pill begins previews Nov. 3 at the Broadhurst Theatre in New York, ahead of an official opening on Dec. 5.