Unlike the riveting-to-watch characters in her Emmy-nominated Netflix dark comedy series “Dead to Me,” show creator Liz Feldman doesn’t seem to be intent on cutting anything out of her life. Instead, she’s adding to it with a 1920’s Spanish Revival-style house in Los Feliz she purchased in early April from screenwriter and producer Adam Sztykiel for nearly $4.8 million.

Sztykiel (“Rampage,” “Made of Honor,” “Due Date” and the “upcoming “Black Adam” starring Dwayne Johnson) and his wife, “Atomic Moms” podcaster Ellie Knaus, bought the historic property in 2017 for about $3.6 million and placed the house on the market in 2020, as Dirt previously reported. That means the couple netted about $1.2 million from the sale, prior to closing costs and taxes.

Resting behind gates on a 10,851-square-foot parcel of land atop one of the most sought-after streets in Los Feliz — near the Griffith Park Observatory — the four-bedroom, five-bathroom house was built in 1925 and renovated in 2000. Typical of the rustic Spanish style, there’s a façade boasting white stucco, window grilles, an ornamental wooden front door and terracotta tile roof, and the two-story dwelling features 4,000-plus square feet of warm and inviting living space punctuated by wood-beam ceilings, arched doorways and windows, and hardwood flooring throughout.

Among the main-level highlights: a spacious living room sporting a wood-burning fireplace clad in blue-and-white mosaic tile and a large arched picture window that looks out onto the charming front-yard fountain, which leads to a dining room formal dining room with a built-in bar and French doors that open to an outdoor patio ideal for relaxing amid the home’s heavily wooded lot. 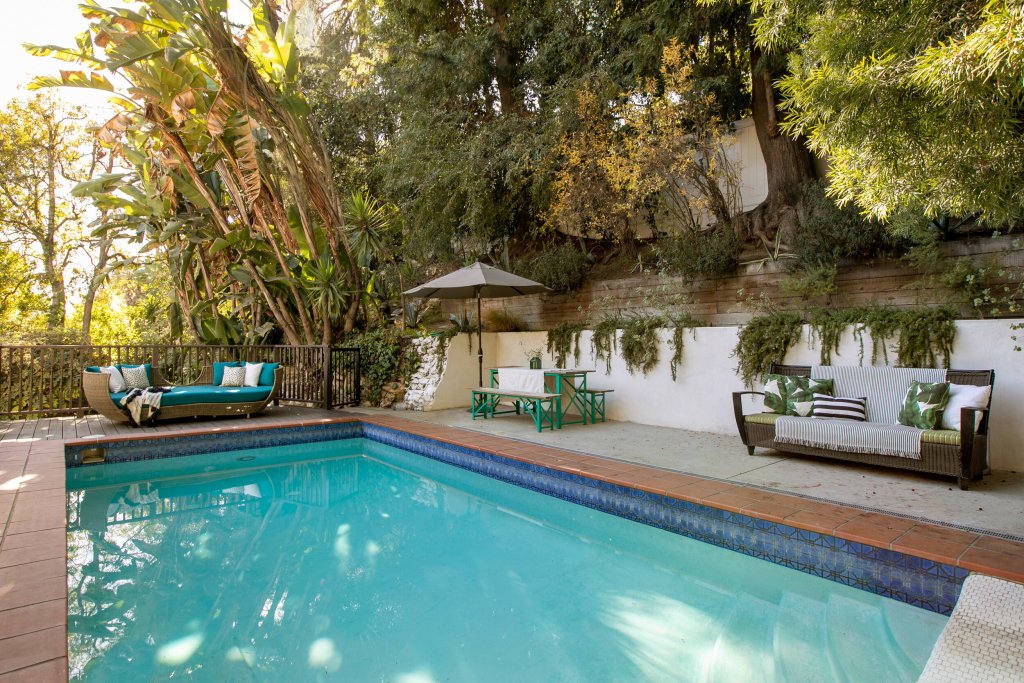 A sleek gourmet kitchen also stands out on the first floor, complete with a large center island holding a sink and ample storage space underneath, high-end appliances and a pot filler embedded into a subway tile backsplash, along with an adjoining breakfast nook with built-in seating and brightly colored wallpaper.

A staircase in the family room leads to the upper level, where the master retreat is a study in Old-World style with its vaulted beamed ceiling, spa-inspired bath with an oval soaking tub and separate walk-in shower, and dual French doors that lead to twin Juliette balconies. There also are three more bedrooms and two baths on this floor.

Outdoors, the lush park-like grounds include a large grassy yard, vine-covered pergola, courtyard with wood-burning fireplace and pool. Lastly, a detached two-car garage features a space used as a podcast studio during the former owner’s tenure there and an upper-level office, while a circular driveway has plenty of room for additional cars.

Feldman, who began her career as a standup comic at age 16, is best known as the creator and executive producer of “Dead to Me,” which was renewed for a third and final season in July 2020. She also created “One Big Happy,” and has written for “2 Broke Girls,” “The Ellen DeGeneres Show” and “Blue Collar TV.” She was named to The Hollywood Reporter’s “50 Most Powerful LGBTQ Players in Hollywood” list, and has been married to musician Rachael Cantu since April 2013.