An abbreviated red carpet and an intimate event planned for Sunday night’s 93rd Academy Awards resulted in a decidedly smaller, more curated audience than at past Oscar ceremonies — but all those close-up looks at actresses at L.A.’s Union Station also resulted in some terrific glimpses at diamonds and gemstones.

Among the night’s best moments in sparkle: Angela Bassett’s Chopard earrings, a terrific pairing with her Alberta Ferretti dress, and the headline-making abundance of Bulgari diamonds that Zendaya wore with her neon-yellow Valentino gown.

Here’s a close-up look at eight of the night’s most dazzling jewelry moments.

The best actress nominee for The United States vs. Billie Holiday turned heads early on the red carpet in a custom Vera Wang Haute asymmetric gown crafted of liquid gold metal mesh, which she paired with more than $2 million in Tiffany & Co. diamonds, including these sleek earrings highlighting fancy vivid yellow and white diamonds, set in platinum and 18-karat yellow gold. 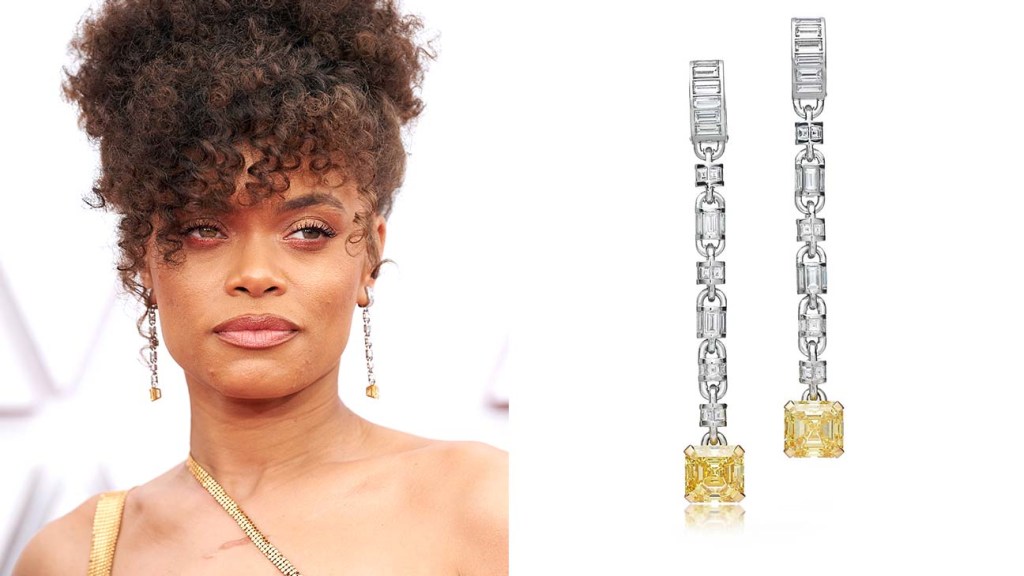 The Oscar-winning singer/songwriter for Judas and the Black Messiah’s “Fight for You” said she was inspired by Prince’s look at the 1985 Oscars in the design of the embellished hooded cape and flared-leg jumpsuit created by Dundas. Its cobalt blue hue informed her jewelry choices, including this ring from Chopard’s Haute Joaillerie Collection, featuring a 12.649-carat cushion-shaped purple spinel, surrounded by white diamonds and set in 18-karat white gold. 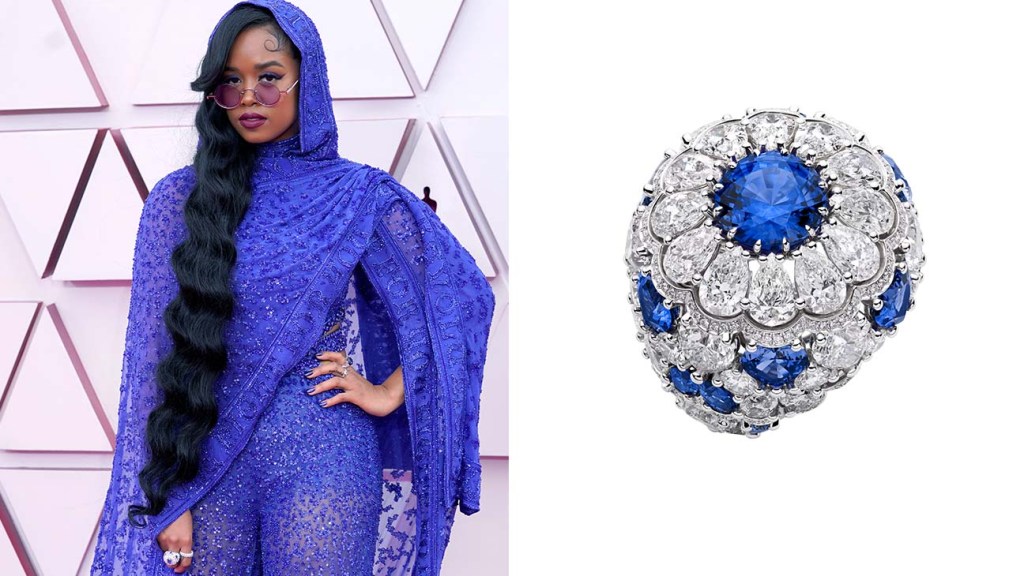 Davis was quickly hailed on social media as one of the night’s best-dressed women in a laser-cut gown by Alexander McQueen, with open-work detailing made possible thanks to a custom-dyed corset that matched the actress’s skin tone. Davis paired a grouping of white diamonds with the gown, including this Diamond Bypass ring featuring 2.70 carats of diamonds set in 18-karat white gold, from the Forevermark by Rahaminov collection. 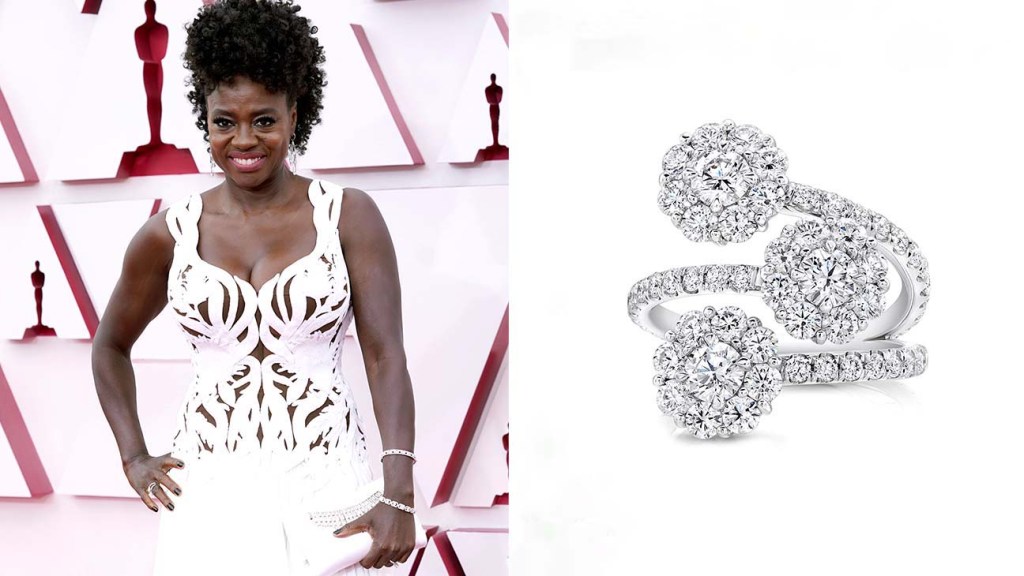 Appearing at the Oscars as last year’s best actress winner to present this year’s award, Zellweger eschewed the red carpet, so it wasn’t until late in the evening that audiences got their first glimpse of her Armani Privé gown in peony pink silk, as well as Cartier’s high-jewelry Honeycomb secret watch, with a lacquered golden sunray dial hidden behind a rose-cut diamond totaling 7.31 carats. Roughly 24 carats of diamonds embellish the unique piece and are set in platinum and 18-karat yellow gold. 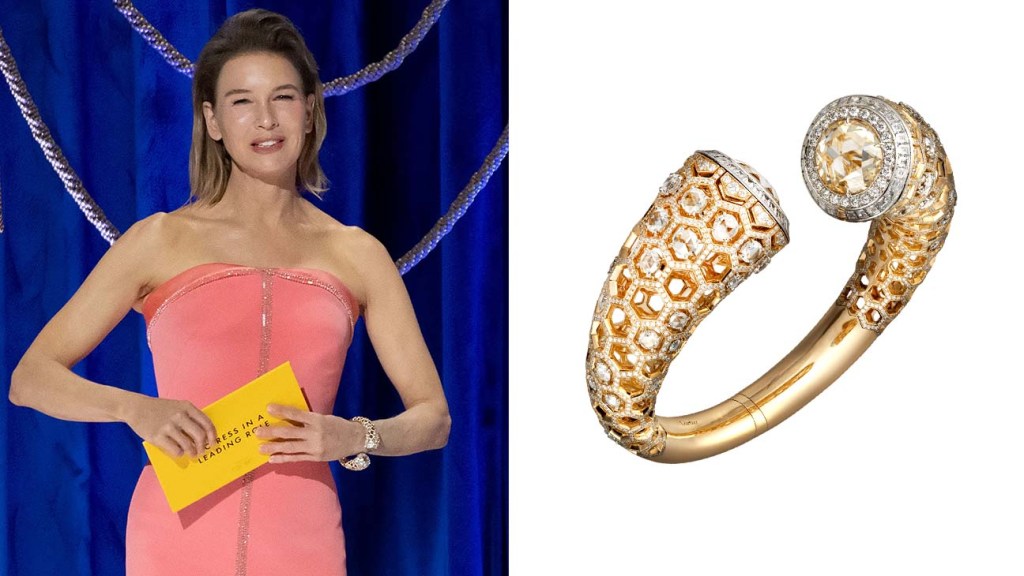 Bassett was among the night’s most talked-about stars in her dramatic red gown, a custom design by Alberta Ferretti featuring draped shoulders and a train in silk organza. The actress chose tonal red pieces for her accessories, including these chandelier earrings featuring 28.19 carats of rubies and 9.54 carats of diamonds set in 18-karat white gold from Chopard’s Haute Joaillerie collection. 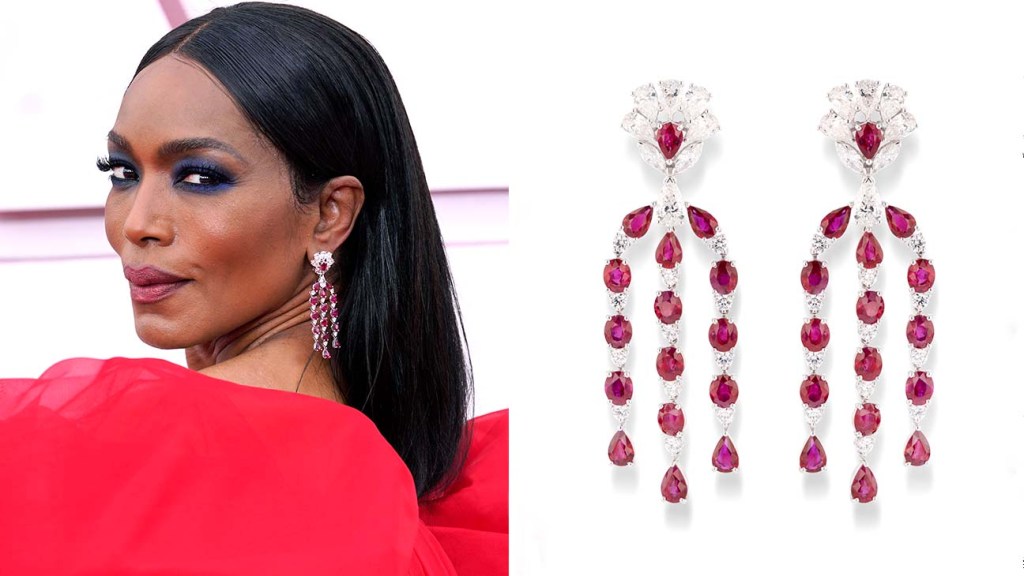 Along with her high-wattage Valentino gown, Zendaya drew raves for her jewels, which included a peek at Bulgari’s newest high-jewelry collection, Magnifica, which launches later this summer. The actress wore a convertible necklace from the collection, a one-of-a-kind piece that can be worn multiple ways, with two diamond collars and a medallion that also can be worn as a brooch. With her other jewels, Zendaya’s sparkle totaled 183.3 carats and more than $6 million. 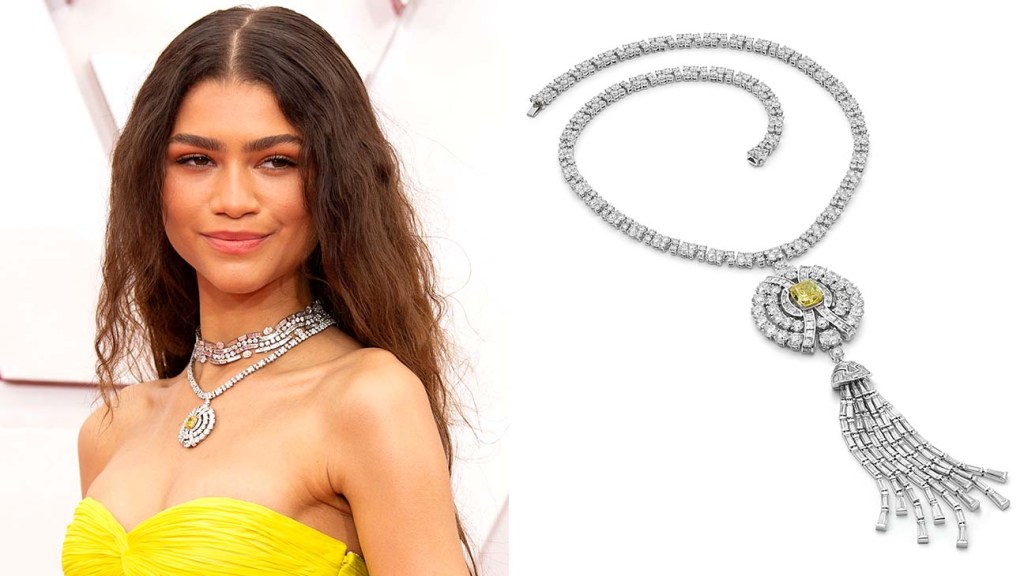 Enjoying her moment in the spotlight at her first Oscars, DeBose wore a one-shoulder orange Atelier Versace gown to introduce the trailer to the upcoming West Side Story, in which the Hamilton actress plays Anita. She finished the look with Harry Winston diamonds, including these Sparkling Cluster earrings, featuring 4.21 carats of diamonds set in platinum. 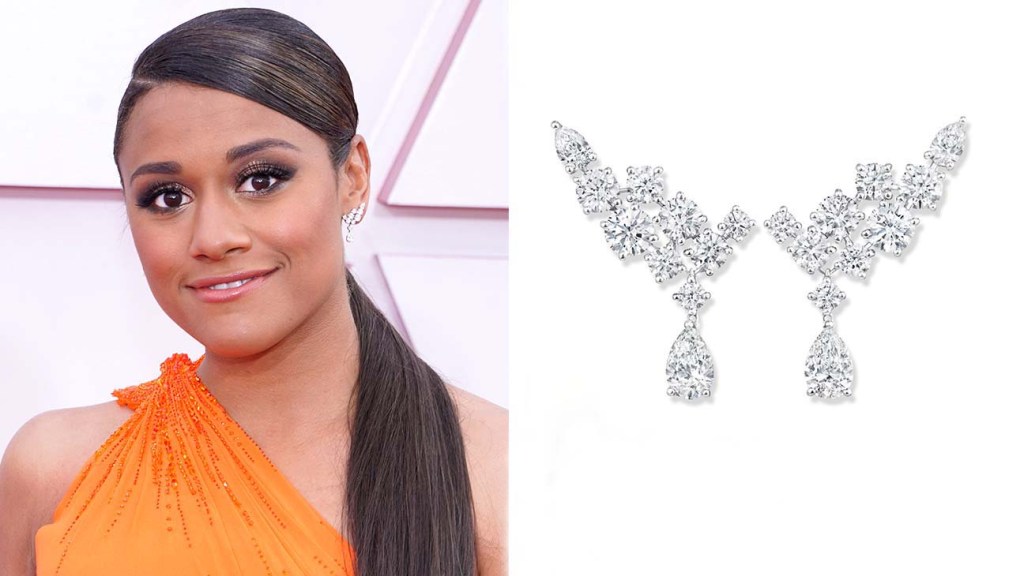 Nominated as best supporting actress for her role as Marion Davies in Mank, Seyfried has been channeling old-Hollywood glamour throughout the awards season, and Sunday night was no exception, as the actress was quickly deemed one of the night’s favorites in her Armani Privé strapless gown in hibiscus red plissé tulle. Seyfried accessorized the gown with delicate diamonds by Forevermark, including this grouping of bangles from the house’s Black Label Collection, featuring diamonds set in 18-karat yellow gold. 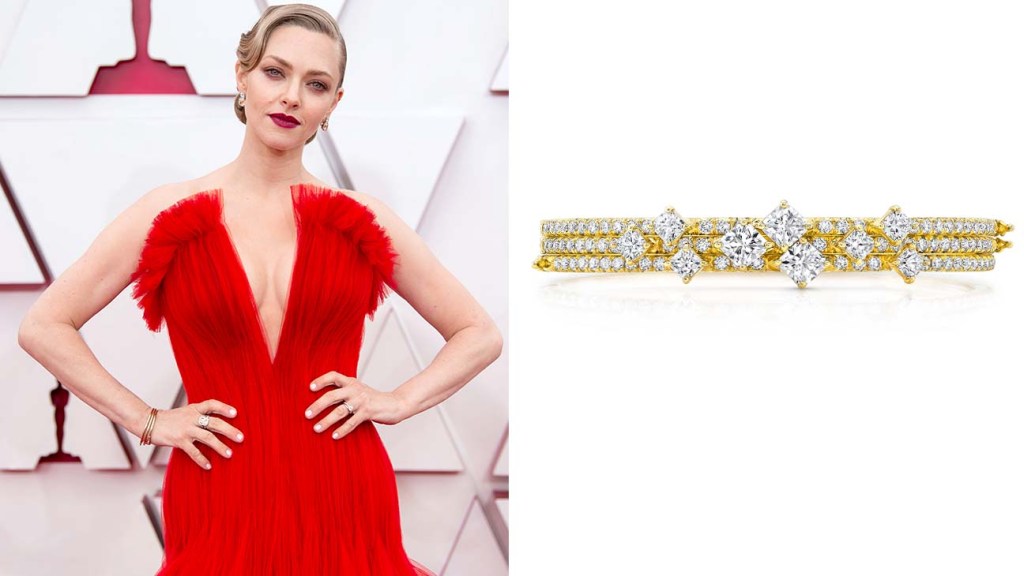