Before she hooked up with Jeff Bezos, one of the world’s richest men, erstwhile news anchor, occasional entertainment reporter and former So You Think You Can Dance host Lauren Sánchez was married for more than a dozen years to another rich and powerful man, showbiz heavy hitter Patrick Whitesell, the executive chairman of talent and media colossus Endeavor.

After a successful six-year stint managing top talent at Creative Artists Agency, Whitesell moved in the early aughts over to Endeavor Talent Agency where he went on to help Ari Emanuel orchestrate the 2009 merger between Endeavor and the William Morris Agency. Initially named William Morris Endeavor, the many-tentacled entertainment agency was renamed to Endeavor in 2017, and, earlier this year, when Endeavor went public, Bloomberg reported that Emanuel and Whitesell together controlled shares worth almost $840 million.

In 2006, Sánchez and Whitesell shelled out $11 million for a gated and then brand-new hilltop estate nipped down a barely-there cul-de-sac high in the mountains above Beverly Hills. In the fall of 2017, Whitesell dropped another $4.8 million on a vacant piece of property next door.

It wasn’t too long after that the marriage fizzled and Sánchez filed for divorce on the day after Bezos’ divorce was finalized in April 2019. So, it’s not too much of a surprise that Whitesell has opted to sell the Beverly Hills home he long shared with his former wife, which has just come to market at nearly $22 million. (The still-vacant neighboring parcel can be acquired for an additional $5 million.)

Listings held by Kurt Rappaport at Westside Estate Agency generously describe the 1.27-acre city-view spread as “reminiscent of the south of France,” with five bedrooms and 8.5 bathrooms in nearly 11,000 square feet spread across the two-story main house, which sits atop a six-car subterranean garage, and detached two-story guesthouse and recreation pavilion.

Arched wooden gates swing open to a cobblestone motor court. Set into a faux-quoined porch, the front door opens to a grand double-height foyer that introduces many of the materials seen throughout the house: travertine, wrought iron, rustic wood beams, and chalky-white plaster. 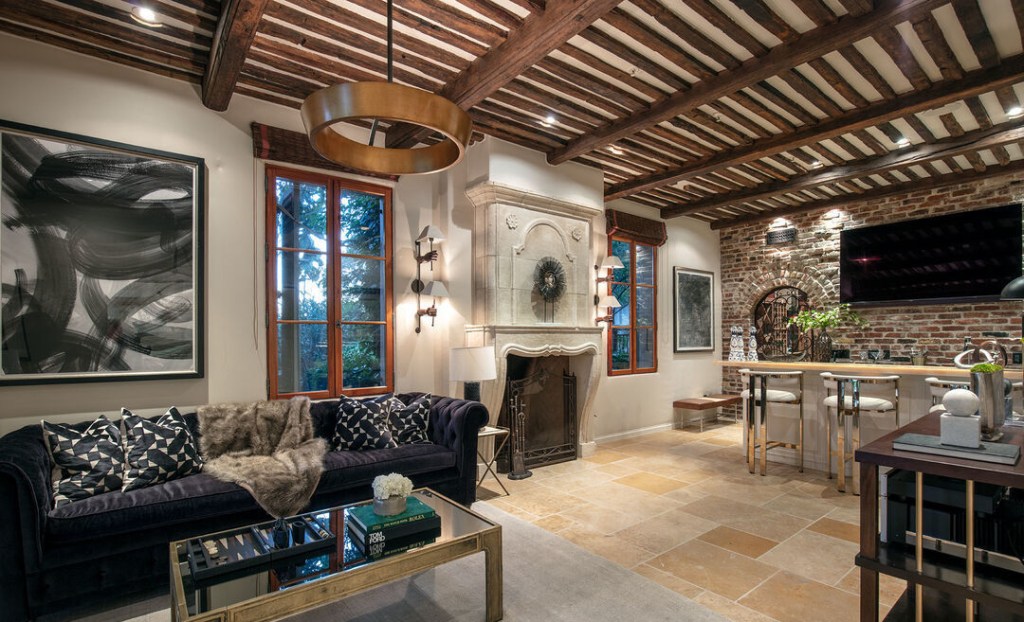 Anchored by a carved stone mantelpiece that may or may not be antique, the formal living room spills out to the flat, grassy backyard, and a pub room features another possibly antique fireplace and slender, rough-cut beams across the ceiling. But for the inlaid wood floor, the dining room is a pretty ordinary dining room, while huge wood beams add character to the kitchen, with its gold-veined marble counters and designer appliances.

In addition to a cozy den for casual TV watching, there’s a professional movie theater with leather recliners. The mansion’s main bedroom offers a chateau-style fireplace, arched French doors to a stone terrace, two dressing rooms, and two decadently appointed bathrooms. A paneled study adjoins the main suite. At the far end of the backyard, the two-story guesthouse and recreation pavilion contains a game room, a fitness area, and a high-end golf simulator.

Set on a high plateau with cross-canyon mountain and canyon-framed city-lights views, the sunny backyard includes a covered dining terrace and outdoor kitchen and a simple rectangular swimming pool and spa surrounded by grass. Tucked away on the steep hillside below the house are raised bed gardens and a quaint, treehouse-like writing shack or mediation studio.

Whitesell has already vacated the premises — listing photos show it staged for the selling process — and though he owns a few other residential properties around Los Angeles, including an ocean front home in Santa Monica he and Sánchez scooped up in 2013 for almost $4.3. million, he and his new bride seem to be spending a fair amount of time shacked up in an ocean-front home in Malibu. However, there are rumors aswirl they’ve already dropped a huge fortune on a very impressive mansion in one of L.A.’s most expensive and prestigious neighborhoods.

As for Sánchez, who now shares Bezos’ many lavish homes around the globe, including a $165-million Beverly Hills mansion bought from David Geffen and a $78-million Hawaiian hideaway, tax records indicate she’s now the sole owner of a waterfront home just outside Seattle, on Mercer Island, that she and Whitesell picked up in 2017 for $6.2 million.