How to Watch ‘The Godfather’ Trilogy in 4K Ultra HD Online

Fifty years after arriving in theaters, The Godfather is still topping the box office — and now Mafia movie buffs can get up close and personal with the Corleone family at home with the digital release of director Francis Ford Coppola’s iconic trilogy in 4K Ultra HD.

In honor of The Godfather‘s 50th anniversary, film fans will get a bigger, brighter and sharper viewing experience when they buy the digital versions of the movies online. The restored version of the first film also has a limited theatrical run in Dolby Vision at AMC Theatres locations.

The release comes ahead of The Offer, a 10-episode limited series inspired by the mob franchise. Premiering April 28 on Paramount+, the first three episodes will be available immediately and subsequent episodes will be released weekly.

Based on the best-selling novel by Mario Puzo, the first film was released in 1972 and won best picture, best actor for Marlon Brando and best screenplay at the 45th Academy Awards. It was followed by The Godfather: Part II in 1974 and the Oscar-nominated The Godfather: Part III in 1990. Coppola recut the third film in 2020 into a version that he and Puzo “intended the movie to be.”

Coppola joined stars Talia Shire and James Caan at the 50th anniversary celebration last month on the Paramount lot, where guests also included Alden Ehrenreich and Jon Voight. Caan recently told The Hollywood Reporter that he was “so pissed off” after learning that Coppola cut one of his major scenes and went so far as to walk out of the screening.

“When Michael [Pacino] tells me he is going to take care of the cop and Sollozzo [Al Lettieri], I say, ‘You’ll get brains all over your nice Ivy League suit,’” Caan recalled. “There was a scene before in the same room that I had with Bobby [Duvall] that was like 10 pages long — and Francis cut all of it out! … But otherwise, he gave me a great honor.”

How to Watch The Godfather Movie Trilogy in 4K UHD Online

The Godfather trilogy in 4K UHD is available on Vudu to buy for $30 for a limited time or for $13 for each movie; those who purchased the films before March 22 can upgrade the quality for a fee.

‘The Godfather’ Trilogy in 4K UHD on Vudu

All three Godfather films on 4K UHD are also available on Amazon Prime Video to rent for $3 to $4 each or purchase for $13 each, and Apple TV users can buy the titles on iTunes.

Where to Buy The Godfather Films on DVD and Blu-ray

Prefer to own a hard copy of the classic mob pictures? The trilogy is available on Amazon on DVD and Blu-ray ($8 to $31), while the Corleone Legacy Edition offers the films in 4K UHD for $92. You can also get a special edition box set with 4K UHD, HDR-10 and DolbyVision (plus the digital copy) at Target for $160 or at Best Buy for $140. 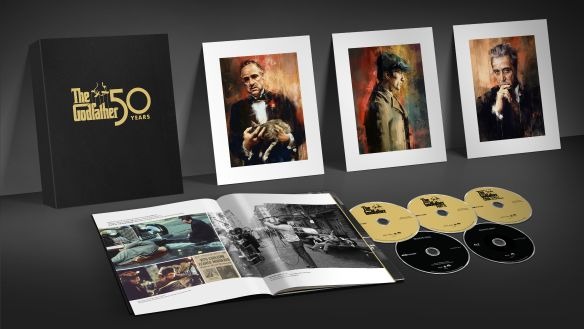