It’s huge news for a restaurant to win a highly coveted star from the globally recognized Michelin Guide. But to win two? It’s like winning a Golden Globe.

“I’m so honored,” says Niki Nakayama, who learned of her new Michelin star status tonight for N/Naka. “California is an all-inclusive and diverse state full of dreamers, and I’m so proud to be here and to do my best to represent!”

Stars were awarded to 90 restaurants in the inaugural 2019 Michelin Guide California on Monday, the first to cover an entire state in the U.S. There are 657 restaurants featured from Napa Valley to San Diego, including 69 with one star, 14 with two stars and seven with three stars.

Wearing a borrowed dress from actress and comedian Ali Wong — after all, Wong borrowed kaiseki kitchen skills from Nakayama for her new Netflix rom-com, Always Be My Maybe —  the Chef’s Table star and James Beard-winning chef practically floated to the stage when her name lit up the big screen at the “live reveal” ceremony in Huntington Beach. You could hear the loud cheers rising from her circle even on the Facebook Live feed.

“It’s a celebration for the city. And not just the city, but the state,” says Somni executive chef Aitor Zabala. “It’s the first time that a state is being regarded like a country, and it’s a significant celebration of the types of restaurants, diverse culinary styles, goals, and quality of ingredients that can be found here. This is my first time to potentially earn Michelin recognition as a leader, alongside, Jose [Andres], so it’s an incredible honor.”

Michelin, the same company behind the tires (and the Michelin Man, who was also in attendance tonight), has been doling out restaurant rankings for its global travel series for more than a century. Today it’s one of the most prestigious awards in the culinary world, an honor that most chefs of a certain caliber will fight to retain year after year. In some countries, such as France, chefs live (and even die) by their Michelin star.

While restaurants in other U.S. markets like New York and San Francisco have retained city-specific Michelin guides over the years, Los Angeles was bestowed with only two, in 2009 and 2010. After criticism for its debut plus lagging sales, the company unceremoniously pulled the plug. “I’m very happy and relieved that Michelin is back in California,” Cimarusti says. “It’s been a long time coming, and we’re all thrilled at Providence.”

Culinary MC Billy Harris hosted the reveal festivities to a crowd of about 400, with Michelin Guide’s international director, Gwendal Poullennec, announcing the name and welcoming chefs to the stage. The vibe in the room was kinetic, with hopeful chefs showing support for each other and beaming with pride for the recognition. The opportunity to hobnob with one another — difficult to do while running busy kitchens — only added to the joyful party atmosphere.

Now partnered with the Visit California tourism board, which reportedly paid $600,000 to have Michelin bring its anonymous “inspectors” into the full California culinary landscape, the new guide features restaurants from Napa Valley to San Diego. The L.A. dining scene is incredibly vast and diverse, but it’s only partially represented here: six received two stars, and 18 received one star.

For Kevin Meehan, whose Larchmont restaurant Kali attracts Scarlett Johansson, producer John Wells and nearby Paramount execs, it’s a lifelong dream to be recognized by Michelin. “The hardest thing is staying in the restaurant industry,” he says. “This re-insures what we do every day. To go into work and know that the napkins are folded correctly for a reason. I’m super honored and humbled, and my team is super excited. They wanted this for themselves, too.”

“A year and a half ago we opened a 700-square-foot restaurant in a food court,” says Dialogue chef Dave Beran. “A team of nine people, doing it on our own. We don’t have bathrooms, a bar or even a changing room. And in a year and a half, we earned our first Michelin Star. It’s an incredible honor to become globally recognized for our work and belief in doing something in a very nontraditional manner. I couldn’t be more proud of our team and couldn’t be more grateful for all of the support of our incredible friends and guests.”

Jeremy Fox, executive chef of Rustic Canyon since 2013, didn’t attend the event, but he was “beaming with pride” to hear of its new one-star designation. “This recognition is the product of the hard work, sacrifice, patience, anxiety and love of many people working together to try and make people’s days better with a comforting meal,”  he said via social media. Fox is now working to open Birdie G’s at Santa Monica’s Bergamot Station this summer.

As in years past, Angelenos once again do not have a three-star Michelin restaurant. Those with “exceptional cuisine, worth a special journey” from around the state include Thomas Keller’s The French Laundry in Napa Valley, The Restaurant at Meadowood in Healdsburg, Quince and Benu in San Francisco, Single Thread in Sonoma, Manresa and Atelier Crenn, all previous three-star holders.

Last week, Michelin announced its Bib Gourmand winners, restaurants that are worthwhile but on a lower tier for being more casual or at an everyday price point. Jon & Vinny’s, Animal, Son of a Gun, Petit Trois and Kismet all made this list, along with stalwarts like Jessica Koslow’s Sqirl, David Chang’s Majordomo, Nancy Silverton’s Pizzeria Mozza, Father’s Office and Pizzana.

Still, for as many restaurants that received Michelin designations, there are some notable stars missing in L.A., like for Suzanne Goin and Caroline Styne’s a.o.c. and Lucques, Suzanne Tracht’s Jar, Ori Menashe’s white-hot Bestia and Bavel, and Wolfgang Puck’s Spago.

“California is a world-class destination, a unique culinary landscape,” Michelin’s Poullennec said. “It’s only the beginning.” 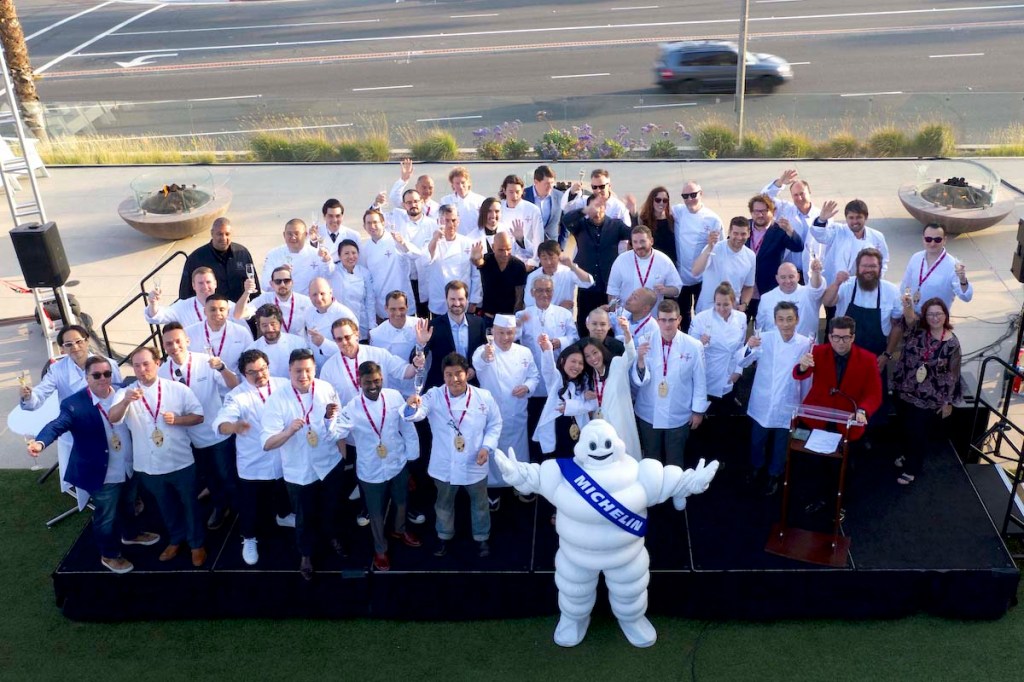