Rihanna Drops $10M on the Beverly Hills House Next Door

Now that she officially reigns supreme as the world’s wealthiest female musician — surpassing industry stalwarts like Beyoncé, Madonna and Jennifer Lopez, per Forbes — Rihanna is no longer shy about splashing the real estate cash. Records reveal the Barbadian import, 33, has spent exactly $10 million to buy the house immediately next door to the mansion she bought for $13.8 million just three months ago.

Though she’s still best known for her anthemic global megahits (“We Found Love,” “Umbrella,” “Rude Boy,” “Disturbia”) Rihanna’s recent wealth explosion is thanks to her forays into the lucrative cosmetics industry, where she co-owns the wildly popular Fenty Beauty brand with LVMH, and the apparel industry, where her Savage x Fenty lingerie brand is reportedly now valued at a shocking $1 billion.

Rihanna’s latest residential acquisition was never on the open market, but tax records say the gated property features a family-sized house, originally built in the late 1930s, with four bedrooms, 4.5 baths and just over 3,500 square feet of living space. The half-acre estate last sold to a non-famous couple in 2015 for “just” $5.1 million, meaning the sellers nearly doubled their money, minus the cost of taxes and any renovations, when they flipped the place to Rihanna.

Circa 2015 photos suggest the house is a decidedly luxurious, if not exactly thrilling, Tudor-style structure with formal living and dining rooms, plus an eat-in kitchen that opens to the family room, which in turn opens to a spacious backyard with an oversized swimming pool set below a terraced patch of grassy lawn.

With this property and the one next door, Rihanna presides over an acre of land total, with more than 11,000 square feet of living space, plus two swimming pools and off-street parking for at least 10 vehicles. Upstairs, the master suite offers a sitting area and private balcony. There’s also a separate guesthouse atop the garage, with another full bedroom suite. Out back, there’s room for al fresco entertaining in complete privacy. A built-in BBQ services a brick patio.

In addition to her $23.8 million Beverly Hills compound, Rihanna owns several other luxury properties, including a $6.8 million villa in the Hollywood Hills, a mansion in her native Barbados, and a high-floor flat in L.A.’s Wilshire Corridor. But her main residence, at least for the moment, remains a $5.2 million condo unit at Century City’s exclusive The Century condo complex. 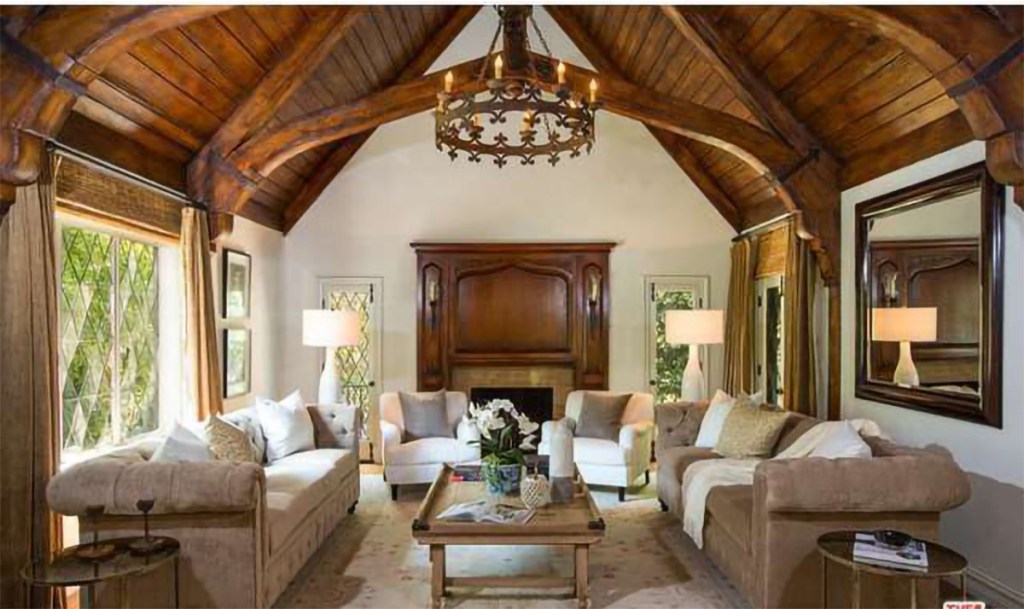