Few have loomed so large and for so long over the entertainment industry as famously autocratic late billionaire Sumner Redstone, who passed last year at 97 years old after years of illness and isolation, not to mention rampant rumors of incapacitation and bitter infighting among his family and a couple of his significantly younger former girlfriends and care takers.

The media magnate was the majority owner and chairman of the National Amusements theater chain, through which he and is family controlled (and still control) majority voting shares of ViacomCBS, the parent company of Paramount Pictures, CBS, BET, Showtime, MTV and Comedy Central. Around the time of his death, Forbes pegged Redstone’s net worth at around $2.6 billion. And, like most billionaires with pockets deeper than some small sovereign nations, Redstone lived large during the last decades of his illustrious life in a lavish mansion in the much ballyhooed — and sometimes maligned for its outré decadence — Beverly Park enclave in the mountains above Beverly Hills that’s recently come to market at $27.9 million.

The land was acquired in the 1980s for about $2 million by fashion designer Dorothy Schoelen, who custom-built the existing mansion, a sleek, glassy and curvaceous copper-roofed take on a Mediterranean villa. In the early 2000s Schoelen put the property out for sale and, so the story goes, it wasn’t long before Death Row Records co-founder Suge Knight, then newly released from prison where he was sent on a parole violation, took a shine to the nearly two acre estate and its canyon-framed city view. According to Schoelen in Michael Gross’s engrossing 2011 tome “Unreal Estate,” some of the neighbors “had a fit” over the gangsta rap pioneer’s potential residency. None more so, it seems, than next door neighbor Sylvester Stallone who quickly mobilized and bought the property in 2001 for an unrecorded amount in an all-cash deal. It was Stallone who the following year sold it to then 79-year-old Sumner Redstone for $14.5 million.

Private security roam the wide, pin-drop quiet and fastidiously manicured streets but, still, like most of the estates in guard-gated Beverly Park, Redstone’s is all-inclusive extravaganza with gates of its own. Listings held with Laurie Hudson at Berkshire Hathaway HomeServices California Properties show there are five en suite bedrooms — one of them round! — and a total of eight full and two bathrooms across its nearly 15,500 square feet. 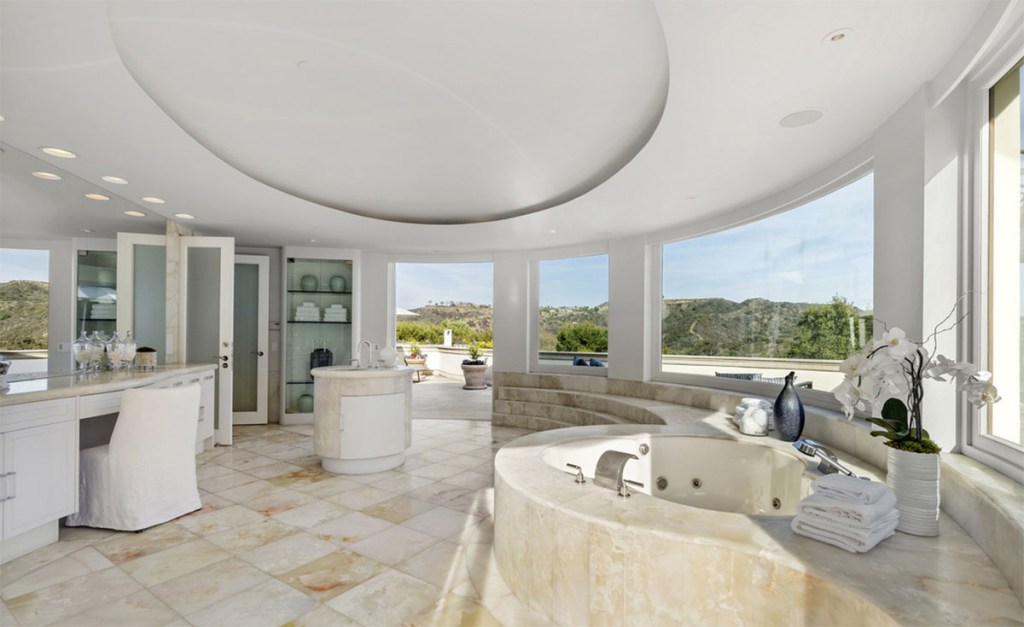 A wrought iron railed staircase makes a curved sweep up to the second floor in the double-height entrance gallery that is dramatically topped by a glass roof that surely requires some kind of hydraulic lift and a whole lotta Windex lift to keep sparkling clean.

Designed for relaxed entertaining with floor-to-ceiling windows that open to column-supported patios that give way to a football field-sized backyard, the mansion’s many public spaces include an over-sized pair of adjoining lounges, one with a pale, almost white floor and the other finished with a black floor as well as a curved fireplace and bar. When fully open, floor-to-ceiling French doors transform the formal dining room into an alfresco dining space, while the kitchen, with its white laminate custom cabinets and updated appliances, steps up to a glass-walled circular dining area. A long corridor with an undulating groin-vaulted ceiling leads to a spa and fitness wing that incorporates an indoor plunge pool and mirror-lined gym. A small subterranean area houses a climate-controlled wine cellar and tasting area. There’s also a library, a study/office and, of course, no mansion of a media baron would be complete without it, a movie theater.

Each of the luxuriously spacious and en suite four guest bedrooms spill out to a balcony with open cross-canyon, mountain and city views. A wall of disappearing windows allows the primary bedroom to spill out to a curved terrace that wraps around the oval-shaped bathroom that features an onyx-sheathed pedestal sink that rather unusually floats in the center of the window-lined and light-filled room. A wide lawn stretches out between the house and the slender negative edge swimming pool that’s shaped like a shallow bowl and connected by a slim channel to a semi-circular spa more intimately positioned among mature trees and lush plantings. Though it’s unlikely he got much use of it the last decade(s) of his life, a double-sided outdoor fireplace is shared with trellis covered dining pavilion that sits just above a sunken and lighted tennis court.

Divided into north and south sections, each with their own gatehouse, The Beverly Park enclave is renown for its immoderately gargantuan mansions and abundantly-financed residents with a penchant for palatial living. In addition to scores of international business tycoons and a few Saudi royals, some of the fabled neighborhood’s long-time residents include Denzel Washington, Eddie Murphy, Rod Stewart and, of course Sylvester Stallone, who floated his 21,000-square-foot showstopper on the market earlier this year with a publicity achieving $110 million price tag.

Some of the ritzy and insular enclave’s newer residents include Mark Wahlberg, who built himself a lavish chateau-style pile of epic proportions a few years ago, Sofia Vergara and Joe Manganiello, who paid $26 million for their 17,000-square-foot mansion last year, and Justin and Hailey Beiber, owners of a seven-bedroom manse they scooped up last year for $25.8 million. The community’s newest resident is Dwayne “The Rock” Johnson who’s just slammed down $27.8 million for sitcom icon Paul Reiser’s nearly 3.75-acre estate, which happens to be right next door to Sumner’s spread.