There would be many reasons for goodwill toward this production of The Starry Messenger — the London debut of Matthew Broderick; the appearance of co-star Elizabeth McGovern, whose role on Downton Abbey gave her oodles of local kudos; eager anticipation of another of Kenneth Lonergan’s laser-like investigations into human behavior.

Yet goodwill alone can’t sustain a very odd, perplexing, often enervating experience. This is a play with big themes — midlife crisis, mortality, loss and grief, religious faith, even a dash of existential crisis for good measure — which fails to deliver even half the impact that it should. And the chief reason is a central character entirely ill-suited to the emotional stakes. It’s ironic that the astronomy teacher with a lifelong love of the stars should function like a black hole to his own story, sucking all the energy from it.

We meet 52-year-old Mark (Broderick) teaching basic astronomy at a New York planetarium (based on the original Hayden Planetarium) which sparked his interest in the universe as a child and is where he feels most at home, but is soon to be demolished. At the same time, he’s applying for a job on a research project to map the exact size of the universe, desperate to fulfill his dream of being an actual astronomer. 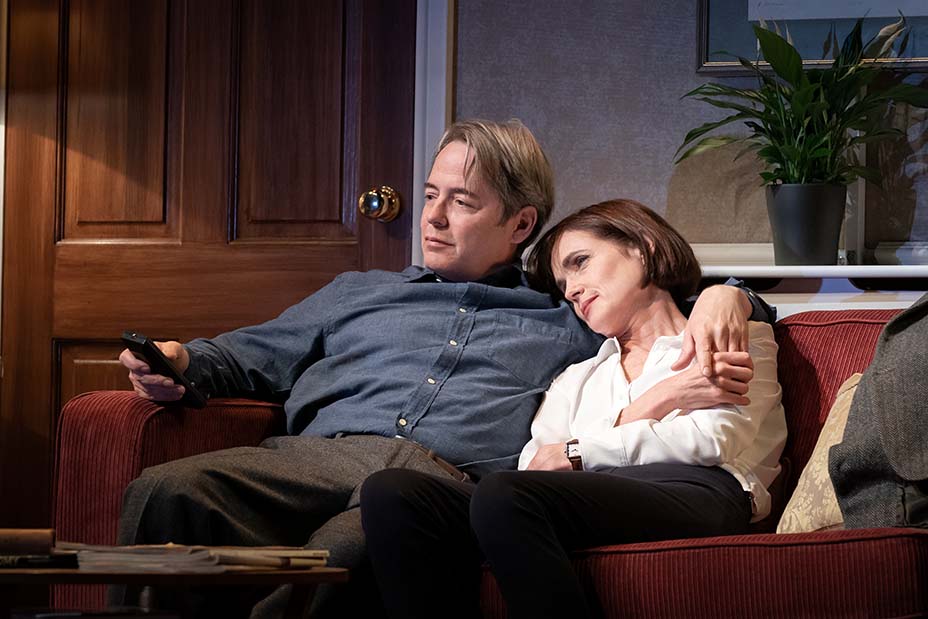 Mark is polite and tolerant (he needs to be; his students are a difficult mixture of idiots and know-it-alls), with a dry wit. But he’s also a dull, uninspiring teacher and, as a human being, something of an automaton. Broderick lends Mark that doughy, insular, monotone persona he’s employed before, which prevents a character from being wholly relatable. The actor is an acquired taste. His Mark may work for some; however, that’s a make-or-break “if.”

Where usually one might seek to distinguish between the efficacy of a character and an actor’s interpretation, that exercise seems redundant here. Since Lonergan cast and directed his old friend when the play debuted in 2009, it must be assumed that the playwright is getting exactly what he wants.

And for his part, Lonergan writes Mark as a man wholly unwilling to engage with emotions, crises, his teenage son, even day-to-day decisions — pretty much anything in life. When asked by his wife Anne (McGovern) to make plans for Christmas, he complains, “It’s too complicated.” When someone enthusiastically posits the unknowable quality of the universe as a metaphor for the human condition, he tartly replies, “It’s not.” He believes only what is proven. So it’s not surprising that he didn’t push his ambition to go into research when he was young, unwilling to test his own talent.

There’s an inbuilt problem in this characterization, in that it’s difficult to imagine such a man having a midlife crisis at all — he would lack the imagination for it. So as Mark starts an affair with a Puerto Rican trainee nurse, Angela (Rosalind Eleazar), it’s conducted entirely on autopilot, with no sense of desperation, urgency, aberrant ego or, indeed, feeling for her. And the presentation of Anne as little more than an energetic irritant obsessed with domestic arrangements (a waste of McGovern’s talents) fails to offer any kind of foil or context for Mark’s own behavior. 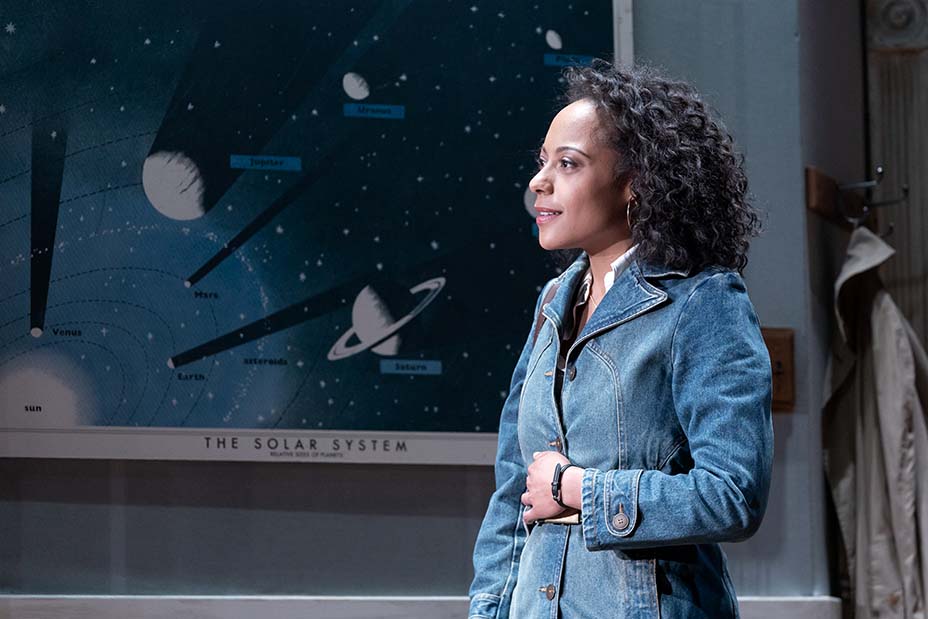 The fact that Broderick’s comedic timing is often in evidence highlights the dilemma in the part and his portrayal. Mark dispenses no end of hilarious, deadpan one-liners, but he does so without relish in or seeming awareness of his own irony. So the comedy flashes, before again being sucked into the aforementioned void.

A parallel storyline involving Angela and a septuagenarian cancer patient (Jim Norton) is an awkward attempt to bring the fear of death into the mix, though it does gain significantly in power as Angela faces a tragedy of her own. And Eleazar and Norton give the most flesh-and-blood, touching performances of the evening. The astronomy classes are amusing but overplayed, their two jokes wearing thin and Mark’s friendly colleague Arnold (Joplin Sibtain) a quite lazy means of edging the plot forward.

There’s an amusing moment in the opening classroom scene, as Mark introduces what he says will be thrilling color images of Mars, only for the pictures to be dully black and white. The same can be said of the play itself.