When costume designer Trish Summerville first started working on David Fincher’s new Netflix film Mank, “even people in my crew and friends were like, ‘This would probably make things so much easier.” That’s because the film is shot in black and white. In fact, though, the opposite was true. “It actually made it a bit more difficult,” says Summerville. “When you shoot in color, you have all these different shades and tones you can work with and you can do stuff that’s tone on tone.”

What she found out — while researching the period and visiting costume rental houses, where she took photos of garments in black and white — is that not only are many options are no-go but that other problems present themselves.

“Prints became very difficult — if they had too much contrast in the colors, they popped and became very confetti like. [And] you can’t just use black and white [clothes],” says Summerville, who previously worked with Fincher on Girl with the Dragon Tattoo and Gone Girl. “White pops too much. Black absorbs too much and goes away.” For example, in a funeral scene in the film ­ — which stars Gary Oldman as screenwriter Herman Mankiewicz during the writing of Citizen Kane — Summerville used an array of other colors to read as black on screen. “A lot of it is navies and browns and grays and reds and burgundies and eggplant, because black just looks so flat,” she says.

One of the standouts of the film is actress Amanda Seyfried’s pitch-perfect performance as Marion Davies, the mistress of newspaper magnate William Randolph Hearst. Her glamorous wardrobe is a showstopper as well. Early in the film, in a scene where Seyfried plays Davies (who’s playing a character who’s about to be burned at the stake), the actress wears a beautiful white dress paired with a capelet. Summerville describes the outfit as “kind of an eggshell chiffon that has very fine ribbon detail through each seam, all layers of chiffon. The piece over the top, the silk capelet, is more of an ecru. All the fabric gave us a lot of texture.” 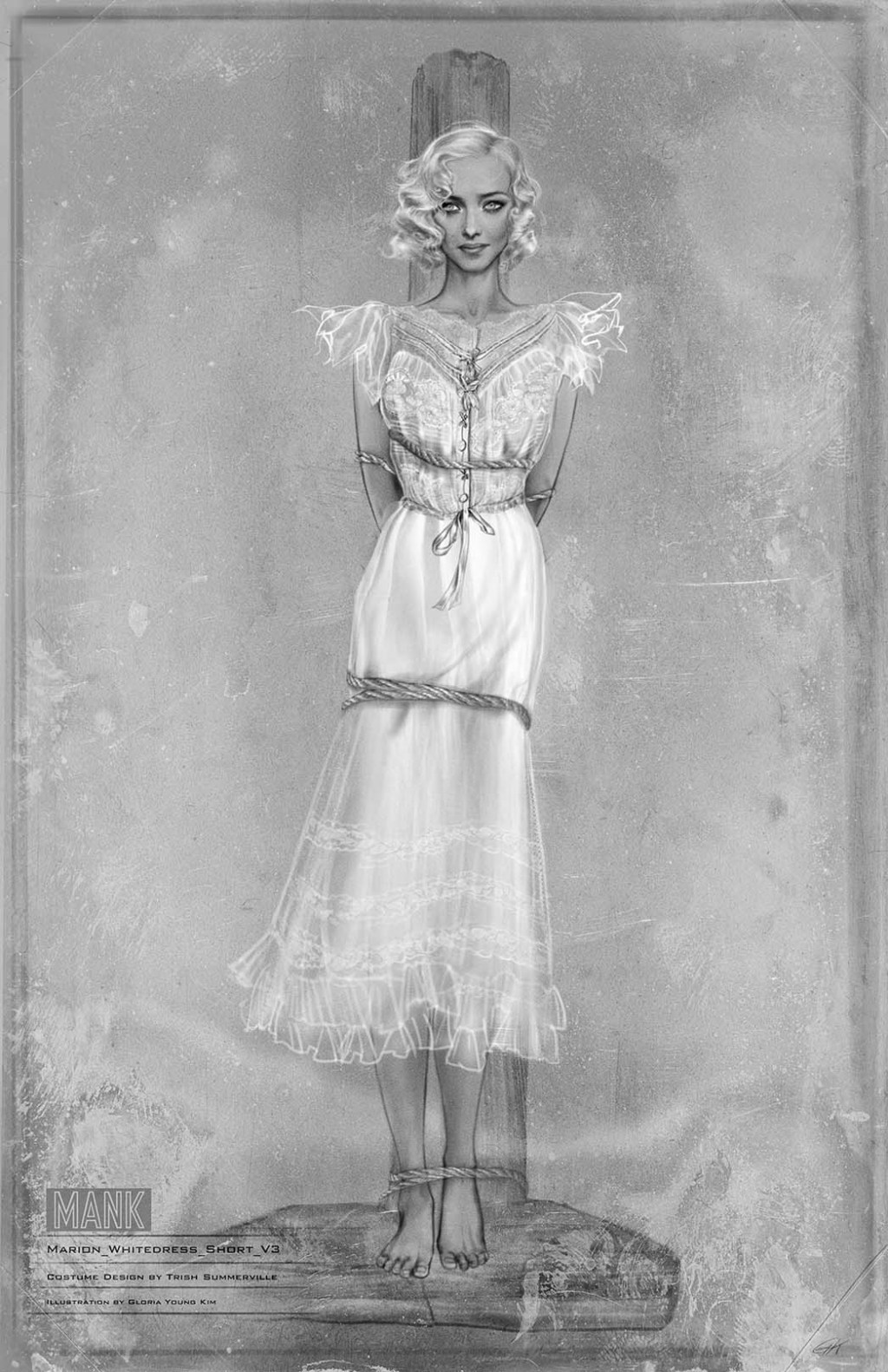 In another scene, a birthday party at Hearst Castle for MGM chief Louis B. Mayer, where Davies is a focal point, “I wanted her to look extremely glamorous,” says Summerville. “We found this fabric that is like an antique gold lamé. Lamé became kind of a big evening fabric in the ’30s. It was bias cut, so very body hugging and very fitted, and then I wanted the sleeves to contrast that and have a lot of movement and flow.” Summerville also notes the outfit Davies wears when she leaves MGM, “That’s a muted periwinkle blue with a faux-fur gray mink collar. We made this really interesting sleeve that was fun.”

For Summerville, one of the more fun scenes to do was a circus-themed party held at Hearst Castle where Seyfried wears a drum majorette outfit with feathered short sleeves, a fairly direct recreation of what Davies actually wore that night. “We found images of that in [Davies’ own] book — she had a lot of photographs of all of the different parties and personal photographs of her and Hearst — and through other research we were able to find photos of her and all the different people that attended,” says Summerville. 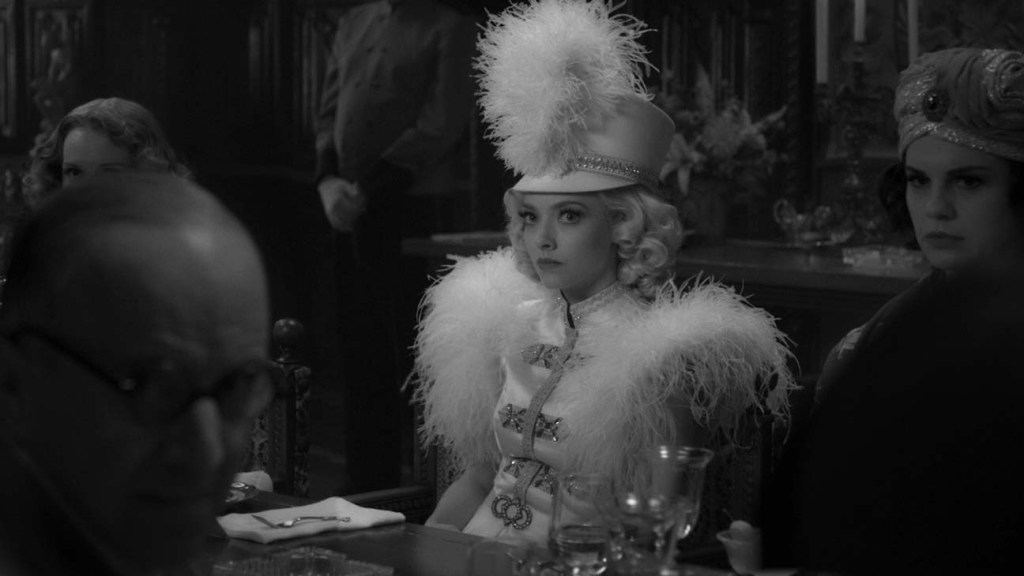 “The people we didn’t have images of I kind of just decided what I would like them to wear. I thought it was fitting since L.B. Mayer ran MGM to dress him as a lion tamer.” She did make one conspicuous change though from what was documented, deciding against showing Hearst wearing the actual bow tie he wore that night. “It was massive and polka dotted. It was a little too much. I didn’t want him to look comical.”

For research, Summerville also looked to histories of MGM as well as books about famed costumer Edith Head, who worked at rival studio Paramount. Head is actually an Easter Egg in the film, reveals Summerville: “In a backlot scene at MGM we dressed someone like Edith Head. She’s walking toward camera toward a rack of clothing.”

Summerville, who is currently working on her next film, Slumberland, starring Jason Momoa, Kyle Chandler and Chris O’Dowd, recently screened Mank in her own backyard. “I wanted to see it big. We actually put up a screen and showed it with a projector on a Saturday night which was really quite nice. We got to have that drive-in movie feel but being in our own backyard and had popcorn and champagne. It was kind of fitting for the mood. It just looks so beautiful and so authentic.” 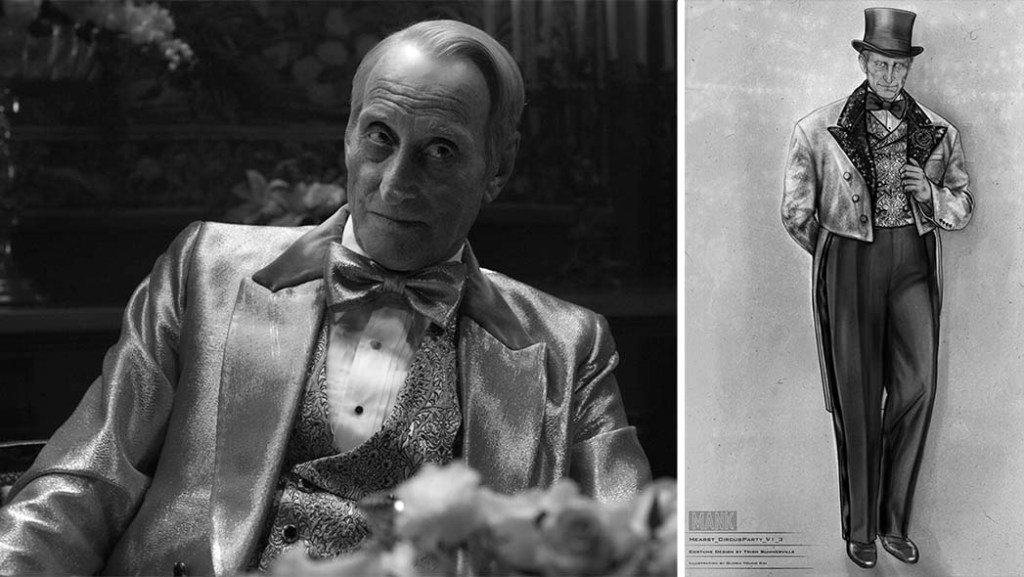