For Rudy Mance, it wasn’t a stretch to look to modern fashion designers for inspiration when making costumes for The Alienist: Angel of Darkness, which is set in 1897 New York. That’s because so many designers, from the late Alexander McQueen and Karl Lagerfeld to contemporary creators like Hedi Slimane, now at Celine, and Miucci Prada, have over the years looked to the Gilded Age era for inspiration, creating “modern interpretations based off Victorian suiting,” says Mance, a former fashion magazine editor who was an assistant and associate costume designer on the first season of the TNT show. “I assisted [costume designer] Michael Kaplan for the first season. He left to go back to Star Wars around episode seven and then I did eight, nine and ten,” says Mance.

Graduating to head up costume design for the second season, Mance has preserved the elegant Victorian template set by Kaplan while adding his own personal touches. For the character of Sara Howard, played by Dakota Fanning, her career has shifted from season one to season two (which premiered on July 19) and her wardrobe changes accordingly. “It’s only one year later but in that year her character really evolved. She went from being a secretary at the police force to running her own detective agency,” says Mance. “I’ve tried to make her as tough as possible but still keep the femininity of the first season. I wanted to make it a bit more modern as well and push the fashion element without it looking too stylized or not of the period.” 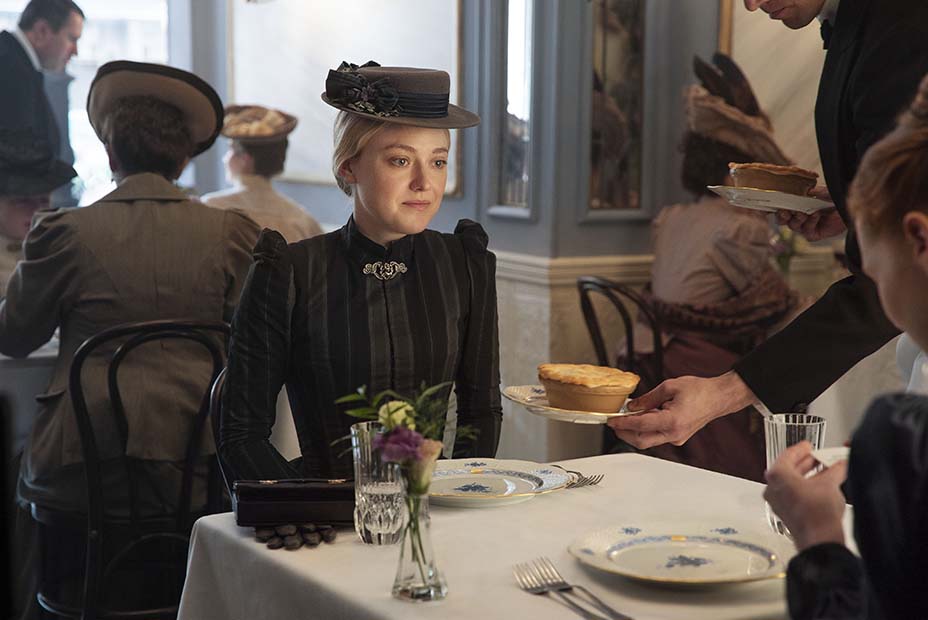 Among her most distinctive wardrobe elements are her many pairs of culottes, which give her a feminine silhouette while also allowing her freedom of movement. “I put her in these really wide-legged culottes,” says Mance. “When she’s standing it looks like she’s just wearing a skirt — the silhouette is the same. But she has a lot of action [this season]. Once she breaks into a sprint, you see that she’s wearing pants.” Among his inspirations for the look were Slimane’s embrace of culottes in recent seasons at Celine.

Fanning’s wardrobe also stands out for the distinctive striping on some of her outfits, which were inspired by Lagerfeld pieces. “In his tweed suits, he would mix two or three different patterns together,” explains Mance. “I did that with some of her striped looks.” 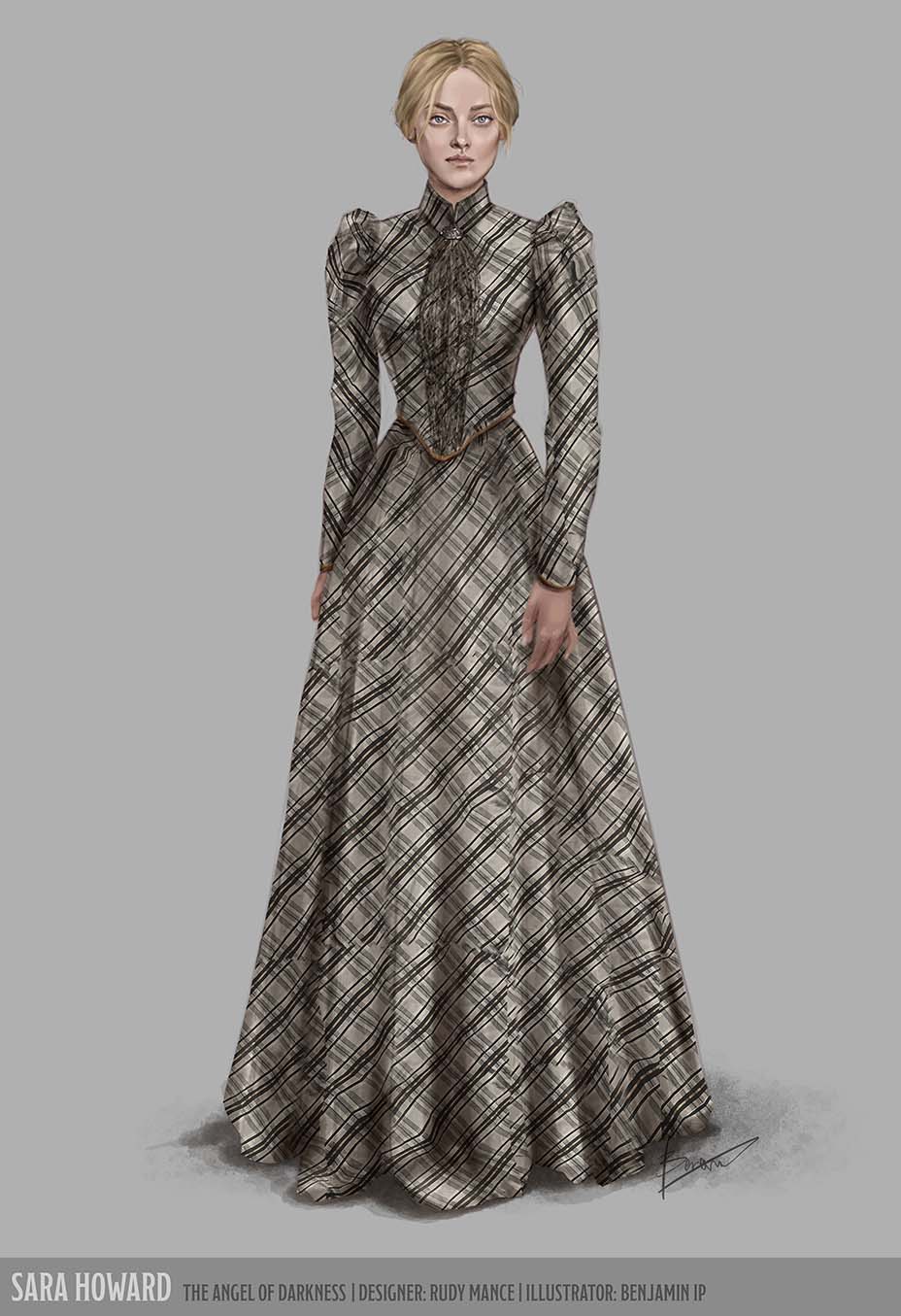 As part of his research into 1890s New York, the costume designer looked to the research library at L.A.’s Western Costume Company. “They had all of the old Harper’s Bazaars from our year, 1897,” says Mance, who also relied on the 2013 book Gilded New York: Design, Fashion and Society (a collaboration with the Museum of the City of New York). He took designs and photos from those sources and mixed them with runway images to create mood boards for each actor, including Fanning’s co-stars Daniel Bruhl, who plays psychoanalyst Dr. Laszlo Kriesler, and Luke Evans, who plays New York Times illustrator John Schuyler Moore (who is less dandy-ish and more business formal in season two). “I would constantly look at [the mood boards]. I would go in there every day multiple times to get inspired and get an idea,” says Mance.

One intriguing accessory that Mance created for Fanning’s character in the new season is a sort of belt, which was inspired by fashion designer Ann Demeulemeester, conceived as a place to stow a gun and bullets. “There was this one pair of pants that Ann Demeulemeester did for a men’s show in 2014 or something where the top of the pants looked like the bottom half of a waist coat,” he says. “I was playing around with that. That idea developed and morphed into, ‘Well, Dakota needs a belt that her character can carry bullets in and tuck a gun into.’ She always has to carry a gun this season.” Mance’s solution: a belt-like accessory “that was literally the bottom of a waist coast. It’s literally the two pockets and three buttons and a V.”

According to Mance — whose previous credits include work on The Politician, American Horror Story, The Nick, Pose and The Leftovers — one of the great pleasures of the job was being able to make most of the clothing, such as a stand-out black duster worn by Fanning in the first scene of the new season. While it evokes leather, it’s actually made of waxed canvas. “We made every single principal piece. I think I made something close to 300 suits,” says Mance. “We filmed and produced everything in Budapest. Hungary is home to some of the most expert incredible tailors I have ever had the pleasure of working with. The challenge there was that a lot of the tailors do not speak English. I have in my arsenal ten or so Hungarian words. We could have whole conversations and neither of us knew what the other was saying. But you could have a whole dialogue. It was a lot of sign language.” Many of the hats that Fanning wears were made by a Hungarian hatmaker named Gizzy (“We weren’t sure if we were going to get her — she’s in very high demand in Hungary,” says Mance), while additional hats came from Rome’s Pieroni Workshop (which has created items for Lincoln, Gangs of New York, Cold Mountain and Pirates of the Caribbean.)

He also worked with Madrid-based Peris Costumes to create suiting and boots for the show. And he recalls the thrill of hunting for fabrics in a shop in Vienna. “I can tear apart a fabric shop in 10 minutes,” says Mance, who says he was drawn to an area of the store that was all household fabrics. “I think three or four of Dakota’s suits, I found those fabrics in a dusty box underneath the sale discount clearance table. There would be this bolt of incredible fabric that I thought, ‘This would be so perfect.’” 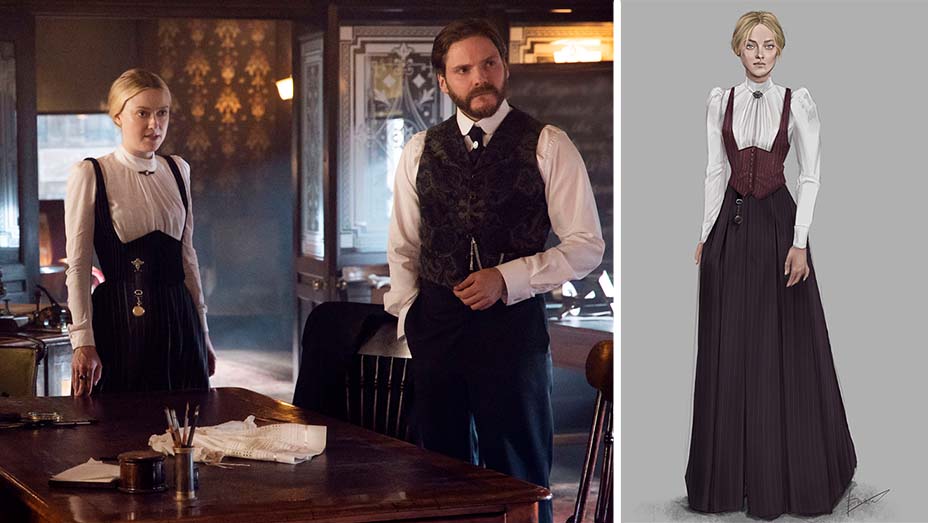 Even while pushing the envelope this season, one thing Mance did pull back on was the height of Fanning’s puffy mutton sleeves, a fanciful look that was in fashion at the time. “That was a fad that was around for just around a decade,” says Mance. “A lot of the press at the time ridiculed and mocked women for them, even though it was fashionable. I wanted to make [the sleeves] just a bit smaller. That was a way to show that a year had passed and that she was still fashionable, but she was becoming a bit more serious in her profession. I really wanted to give her a tough, more serious edge.”