It might not have always been pretty (audio issues, anyone?) but when the Hollywood Foreign Press Association presented the 78th annual Golden Globe Awards, the stars responded by enlisting their glam squads and breaking out custom gowns en masse to prove that glamour is, indeed, back.

Ahead of Sunday night’s telecast, it was unclear how the industry would respond against the backdrop of a still looming COVID-19 pandemic and a fresh controversy due to the HFPA’s lack of Black members. The Golden Globes red carpet, after all, has long been a place for political and socially conscious statements, most recently in 2018 when the majority of female participants wore black in solidarity with Time’s Up and the #MeToo movement. While calls for change were worked into hosts Tina Fey and Amy Poehler’s monologue and into some of the night’s acceptance speeches, the stars, for the most part, let the designer gowns do the talking.

Due to the pandemic, Globes producers split the telecast to two locations, with Tina Fey hosting from the Rainbow Room in New York and Amy Poehler holding it down from the usual headquarters inside the Beverly Hilton Hotel. At times, the evening had the look and feel of a typical awards show with red carpets and on-stage presenters in both locations, even if the carpet was sparsely populated save for a handful of photographers. Other times … not so much, as nominees and eventual winners appeared remotely in Zoom-style boxes from far-flung locations. It served as a reminder that Hollywood, like much of America, remains in the bifurcated zone where some aspects of everyday life are back to normal but other things are still not happening, especially large-scale gatherings. 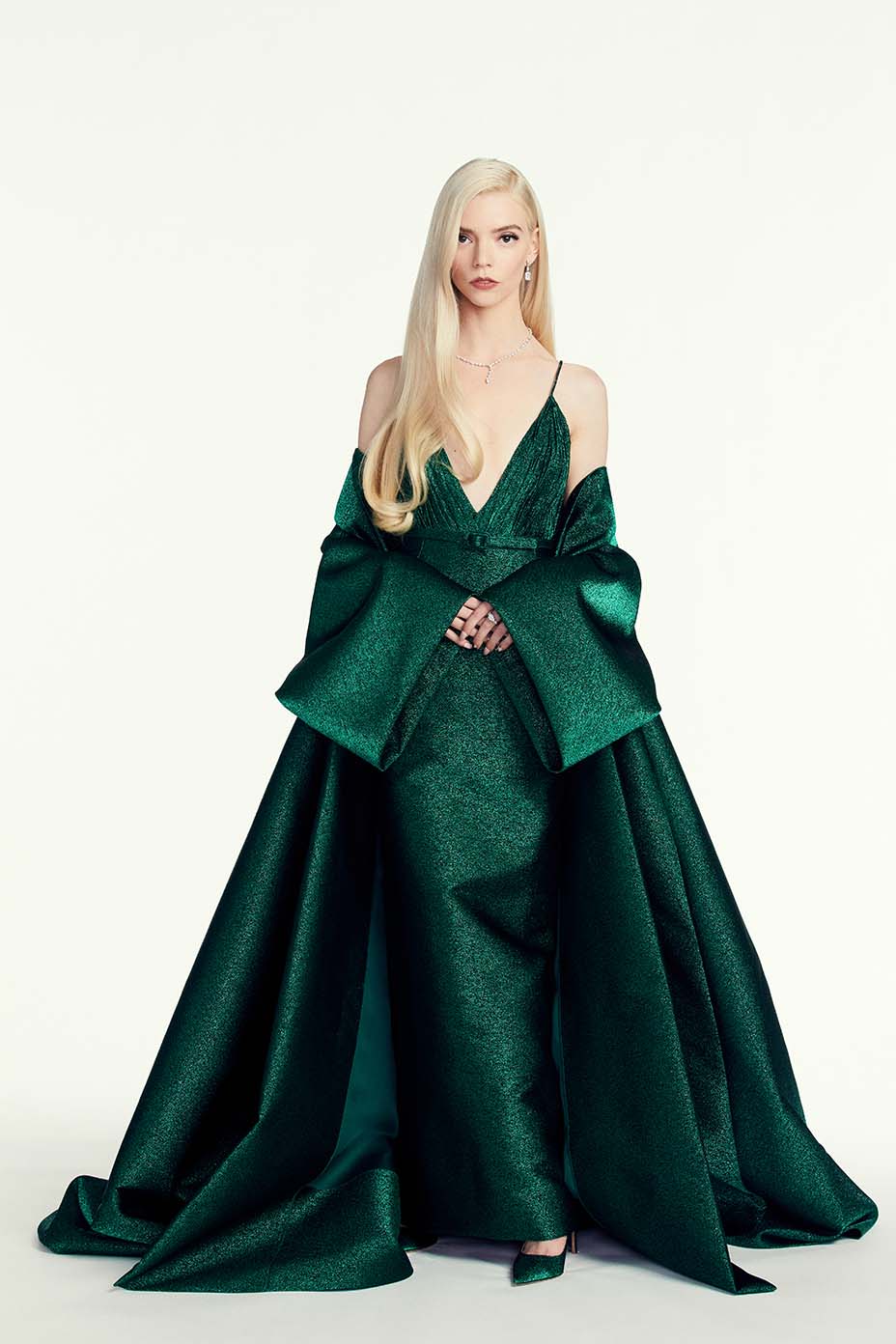 “Not a bad way to spend a Sunday night in,” posted Dan Levy, who won for the beloved comedy series Schitt’s Creek. The actor and series co-creator earned wore a brightly hued Maison Valentino couture ensemble, Cartier jewelry, DL Eyewear and chunky gold footwear. Levy thanked the house and its creative director Pierpaolo Piccioli “for letting me be the first to play dress up in your new Men’s Haute Couture.” 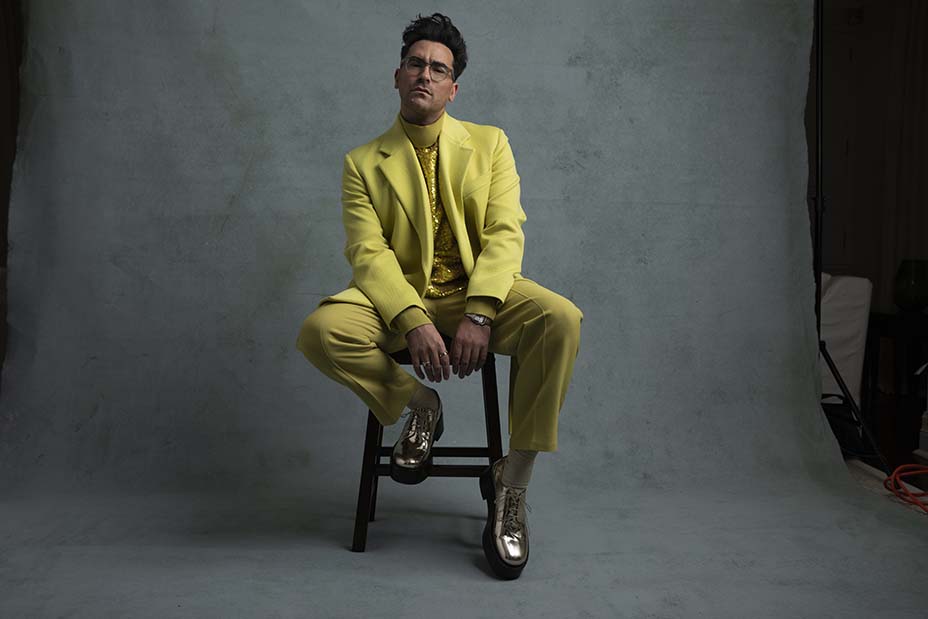 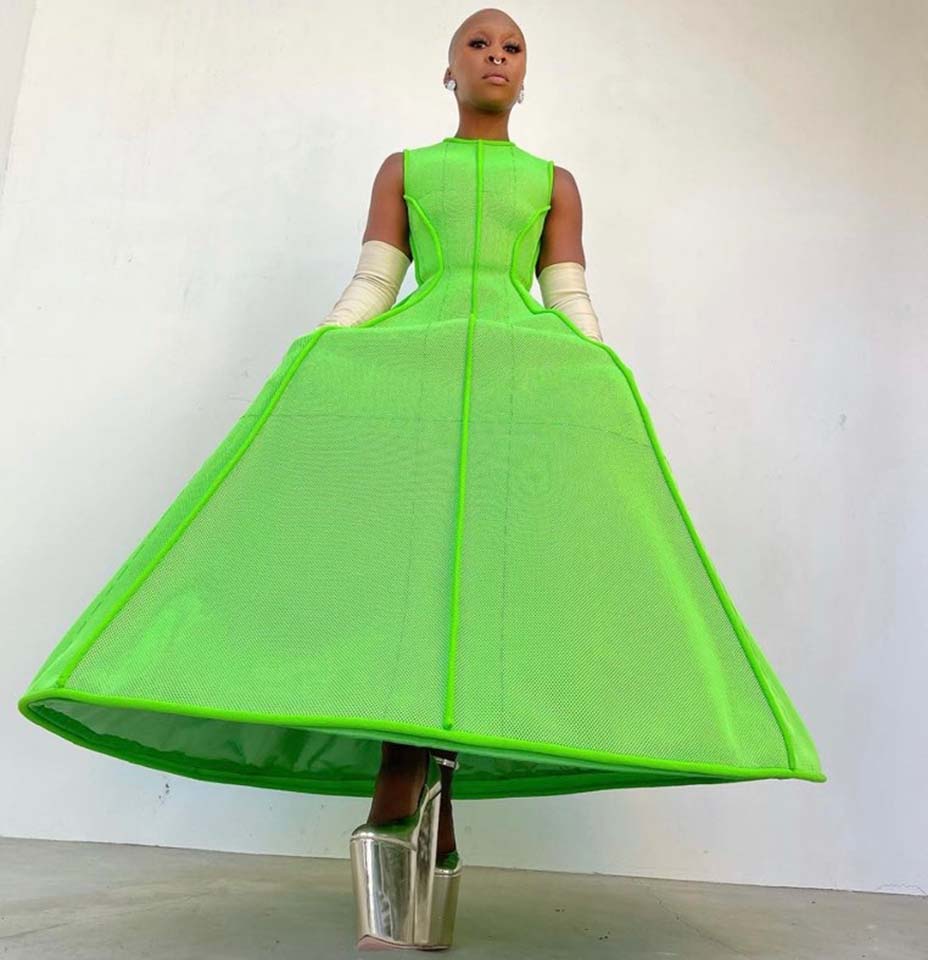 And double One Night in Miami nominee Leslie Odom Jr. selected a two-tone suit with a pop of color courtesy of a lime turtleneck by Valentino. The best supporting actor and best original song nominee also slipped on a Bulgari Octo Roma watch in steel with pink gold detailing, white dial and brown alligator strap paired with a pink gold and bronze B.zero1 ring.

Oh damn! It looks like @leslieodomjr is ready for One Night In Miami… but lucky for us we’re going to see him tonight at the #GoldenGlobes! pic.twitter.com/rUJh3SIm4a

The largely virtual production allowed for many of the nominees to get dressed up, pose for pics and then play it casual once their category had been announced. That’s what first-time nominee Kaley Cuoco did to celebrate her nod for The Flight Attendant in Oscar de la Renta, Harry Winston jewelry and Stuart Weitzman shoes. Once she could relax off-screen, the actress and producer spread out on the floor to enjoy a full spread. See both looks below. 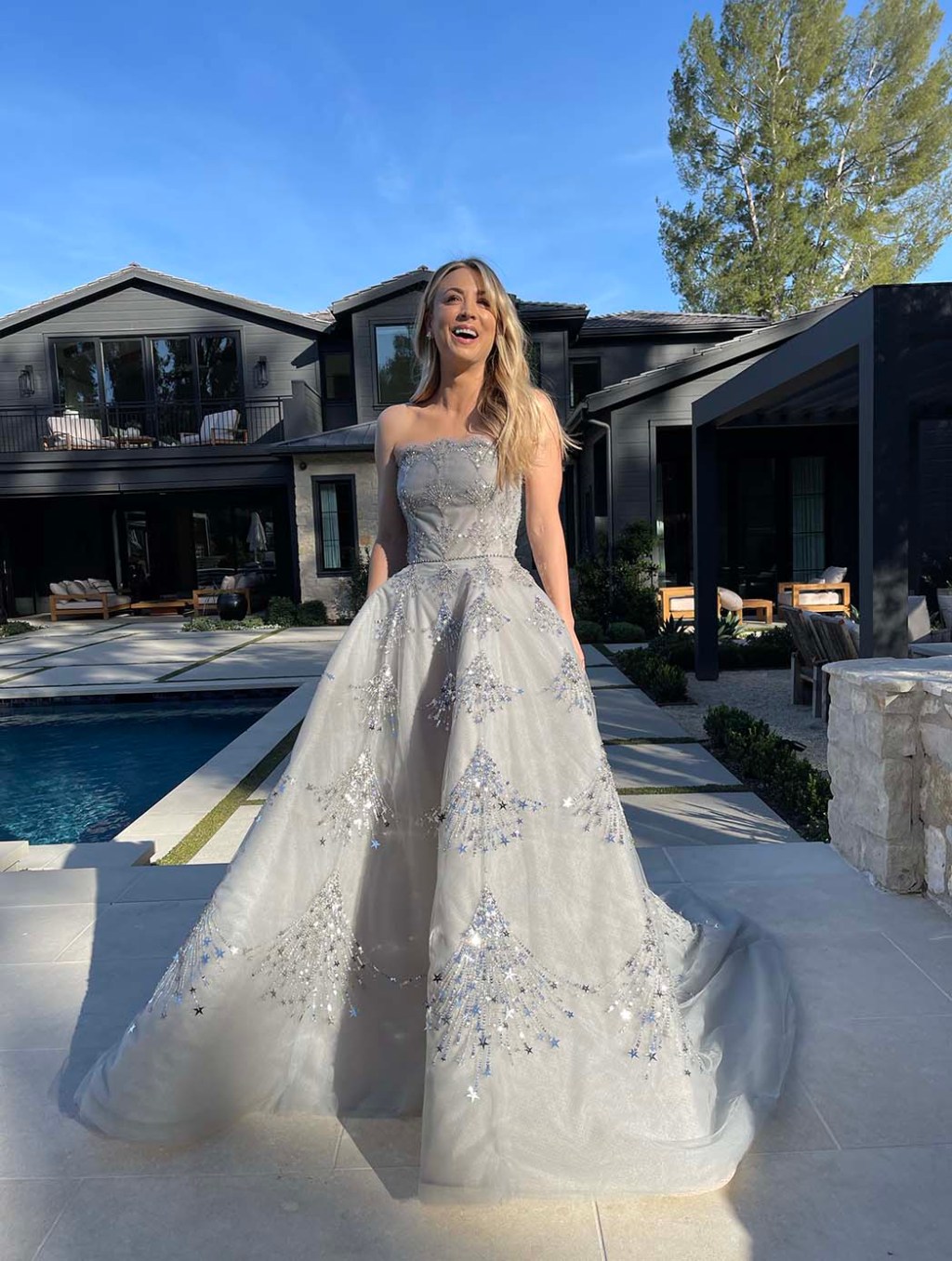 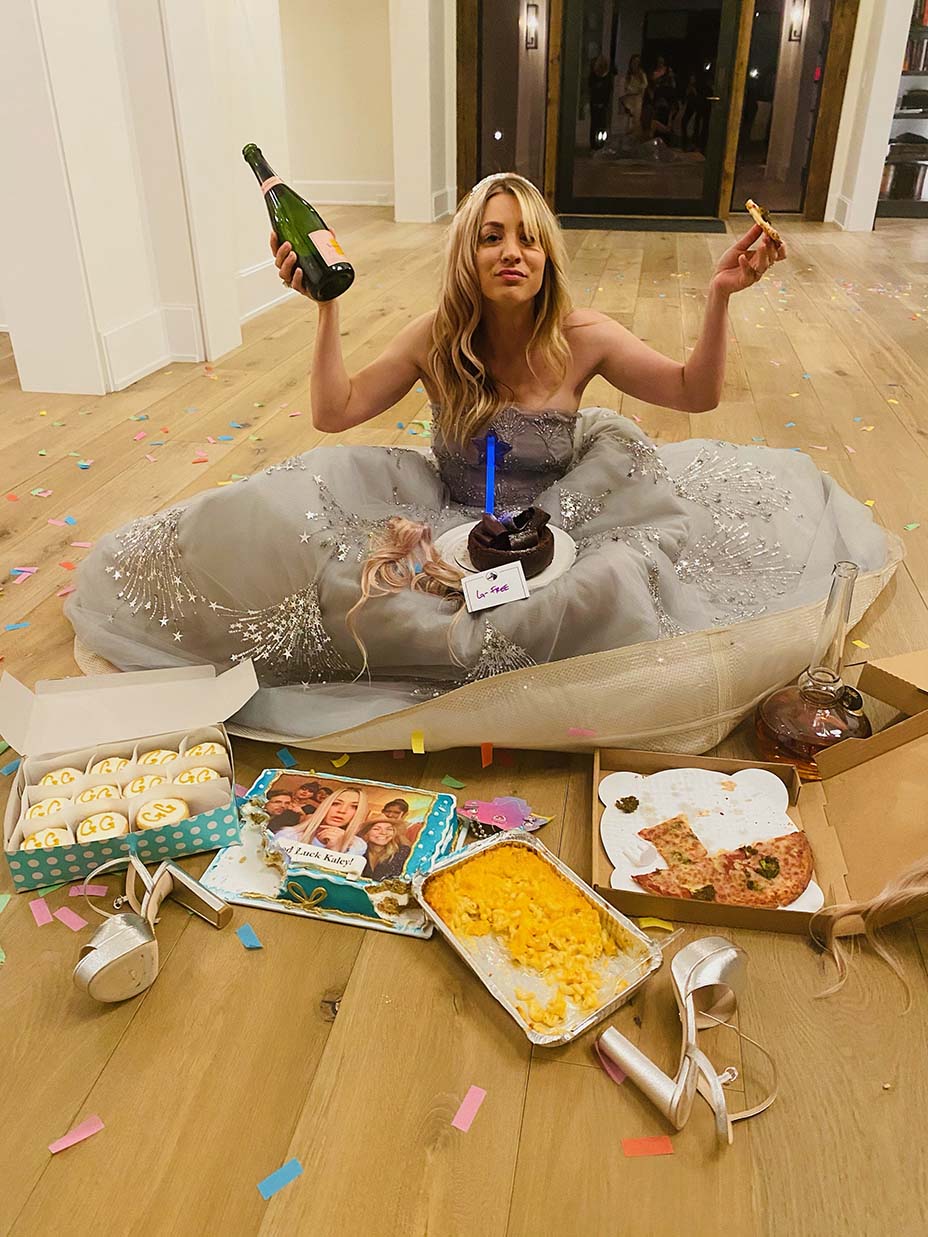 OK, to be honest, not everyone pulled couture straight from the Paris runway. In London, where he’s filming Ted Lasso, best actor in a comedy winner Jason Sudeikis played it cool in a multi-colored hoodie which co-host Fey joked would later be available on NBC.com/GlobesFashion. (Hint: It’s not.) Joining Sudeikis in skipping black-tie altogether were Jeff Daniels and Joaquin Phoenix, the latter of whom wore a zip-up hoodie onstage to present the best actress prize. 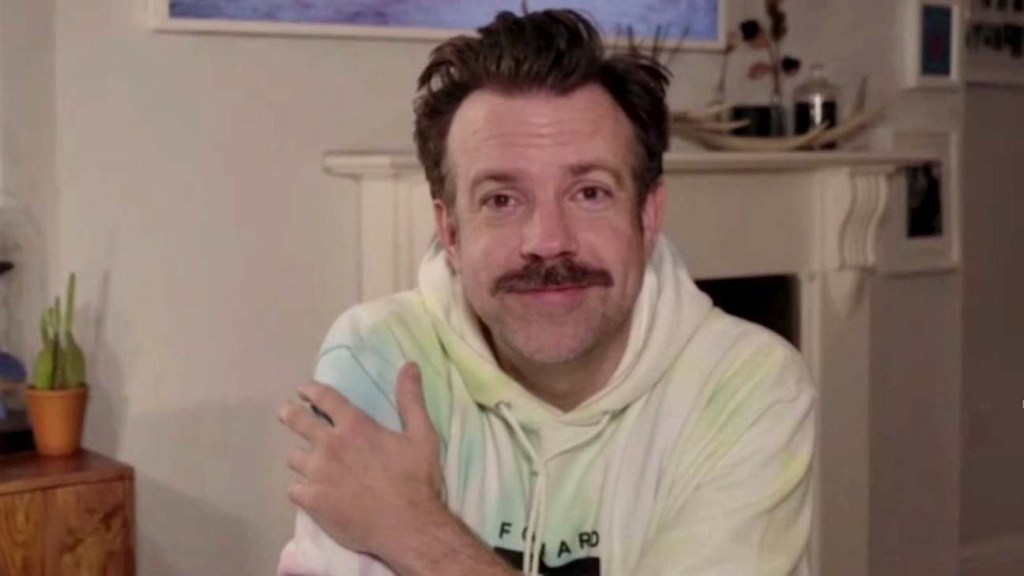 Some of the best accessories of the night were not borrowed. Minari filmmaker Lee Isaac Chung accepted the best motion picture – foreign language trophy for his tender film that stars Steven Yeun and Yeri Han as Korean-American immigrants who migrate to a farm in Arkansas in search of the American dream. Chung’s 7-year-old daughter nearly stole the show, exclaiming, “I prayed! I prayed! I prayed!” over her father’s chances. Chung explained that he made his film for his daughter and it speaks the language of the heart. “I’m trying to learn it myself and to pass it on, and I hope we’ll all learn how to speak this language of love to each other, especially this year. God bless you all, and thank you.” 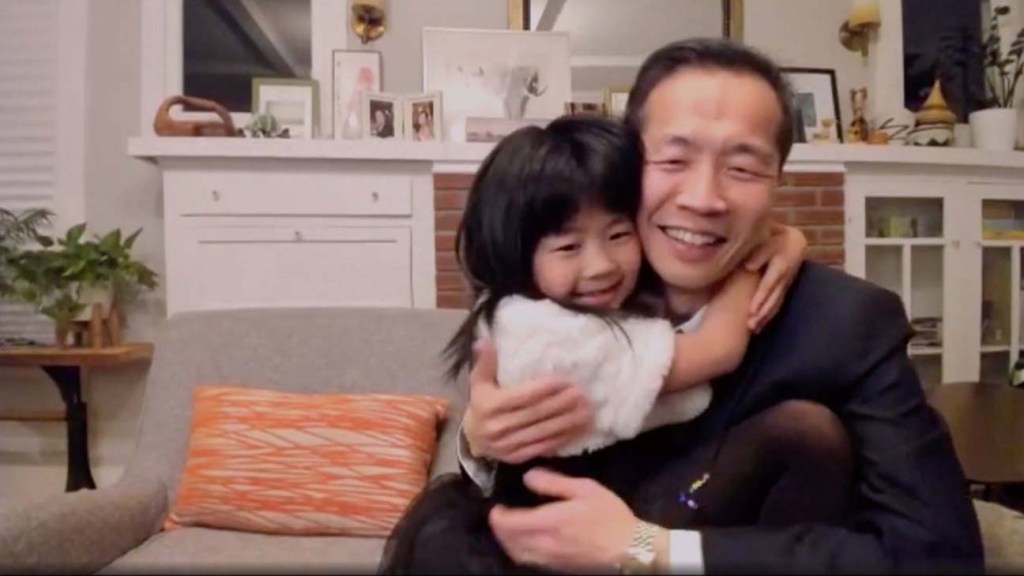 Like Rachel Brosnahan at last year’s Emmys, Golden Globe winner Jodie Foster spent the night in designer pajamas. Seated with wife Alexandra Hedison, The Mauritanian star was decked out in Prada with an adorable plus-one — their dog, Ziggy, who shared in the special occasion and even got a shout out in her speech as did Green Bay Packers quarterback Aaron Rodgers (newly engaged to Shailene Woodley). 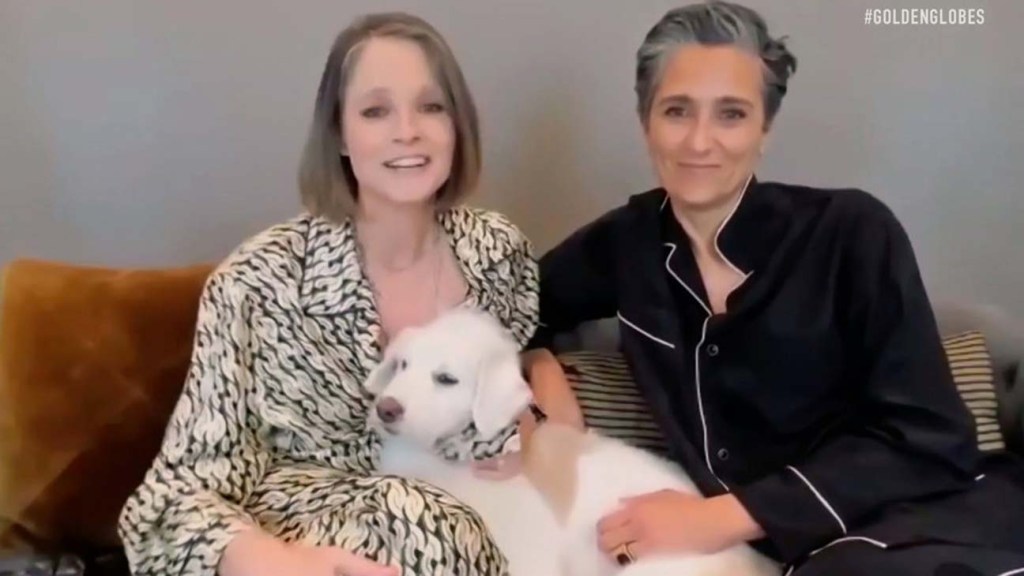 A largely virtual production allowed for yet another pandemic-era opportunity to peek into the homes (or hotel rooms) of the stars. While some opted for photo-shoot-ready blank backdrops (Dan Levy, looking at you), others like Bill Murray looked in vacation mode sitting outside in the sunshine while wearing a multi-colored shirt. 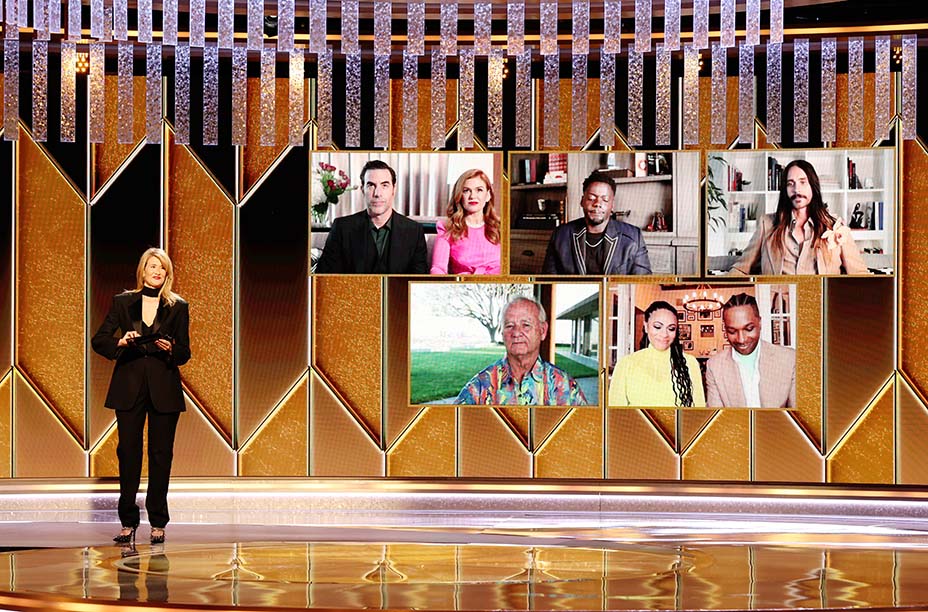 A mini-trend to emerge from Sunday night’s show was just that — mini. Wonder Woman 1984 co-stars Kristen Wiig and Gal Gadot and co-hosts Fey and Poehler all got the memo to wear mini dresses. Wiig was outfitted in a custom Prada look paired with Harry Winston jewels and Aquazzura ankle strap heels. Gadot selected a Givenchy dress with sheer sleeves jewels along with Tiffany & Co. gems. Fey opened the show in a black Versace tuxedo dress with satin lapels, while Poehler opted for custom Moschino. 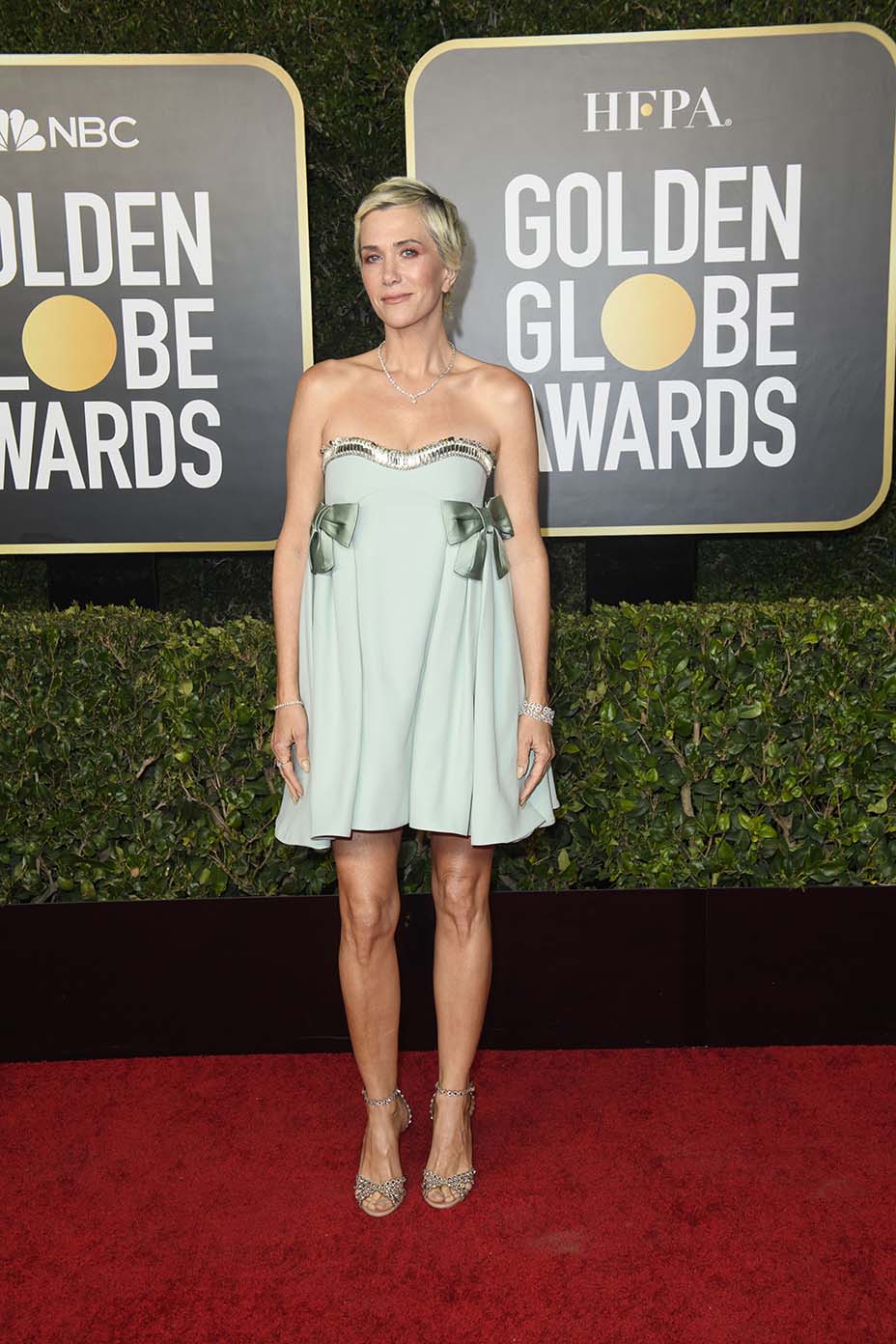 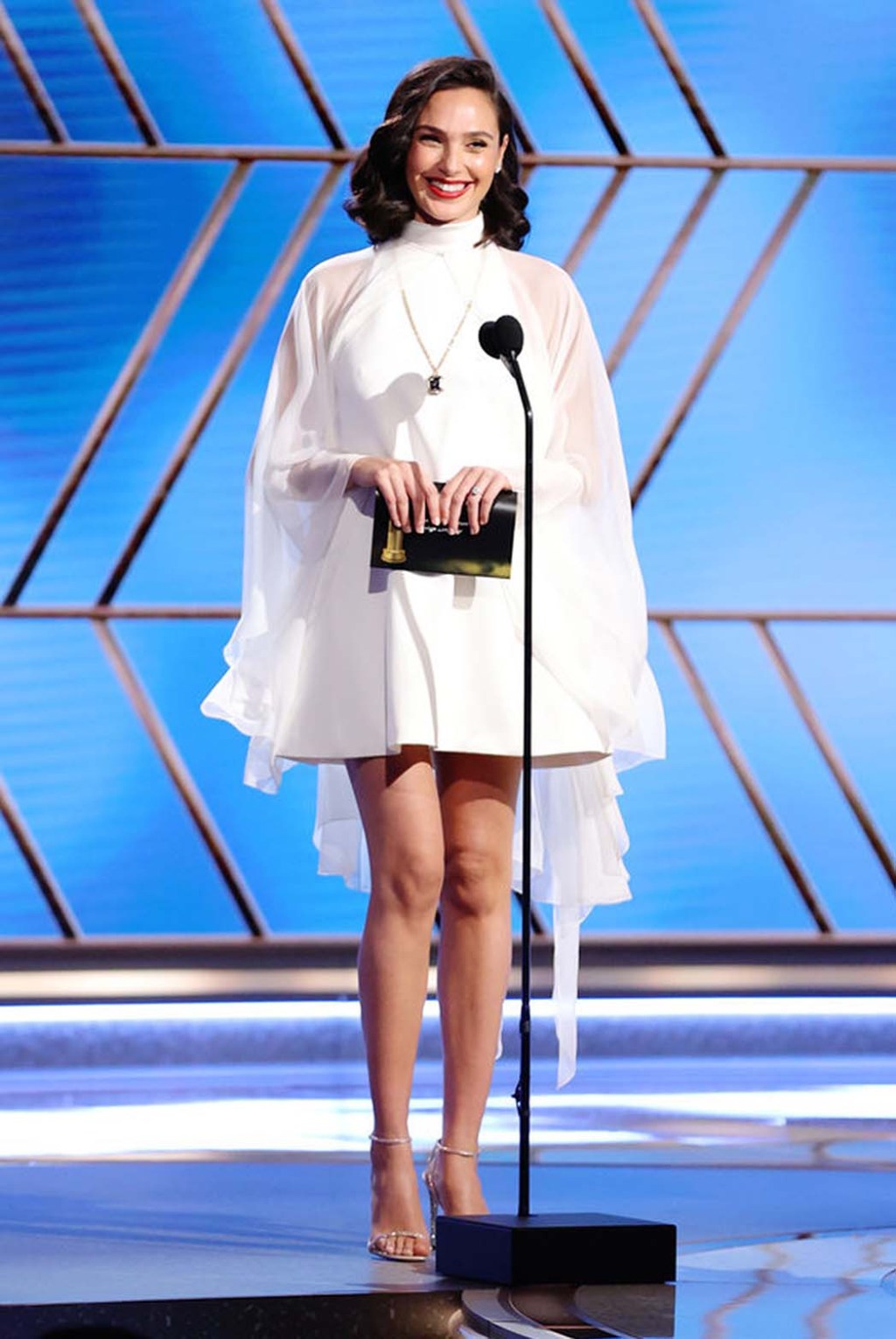 The Golden Globe Awards ceremony is produced by Dick Clark Productions, a division of MRC, which is a co-owner of The Hollywood Reporter through a joint venture with Penske Media titled P-MRC.