Avo Yermagyan has been working with Leslie Odom Jr. since 2017, soon after the actor’s Tony win for Hamilton on Broadway, and it’s a relationship that the Los Angeles-based stylist considers a genuine collaboration.

“Someone like Leslie comes along once in a lifetime,” Yermagyan says. “He knows what he likes, but he also isn’t afraid to try new things. He’s the real deal.”

Every stylist-star dynamic is different, and Yermagyan is quick to point out that he and Odom have a lot of fun working together, while also approaching each styling opportunity from a fresh viewpoint. “We’ve had the opportunity to collaborate on looks for his solo music, as well as for his film projects,” explains Yermagyan, whose client list also includes Nick and Joe Jonas and Westworld actress Angela Sarafyan. “In order to do this, we do a delicate dance of dressing for each project. I style less with clothes in mind but more so with the intention of the story we are telling with each look.” 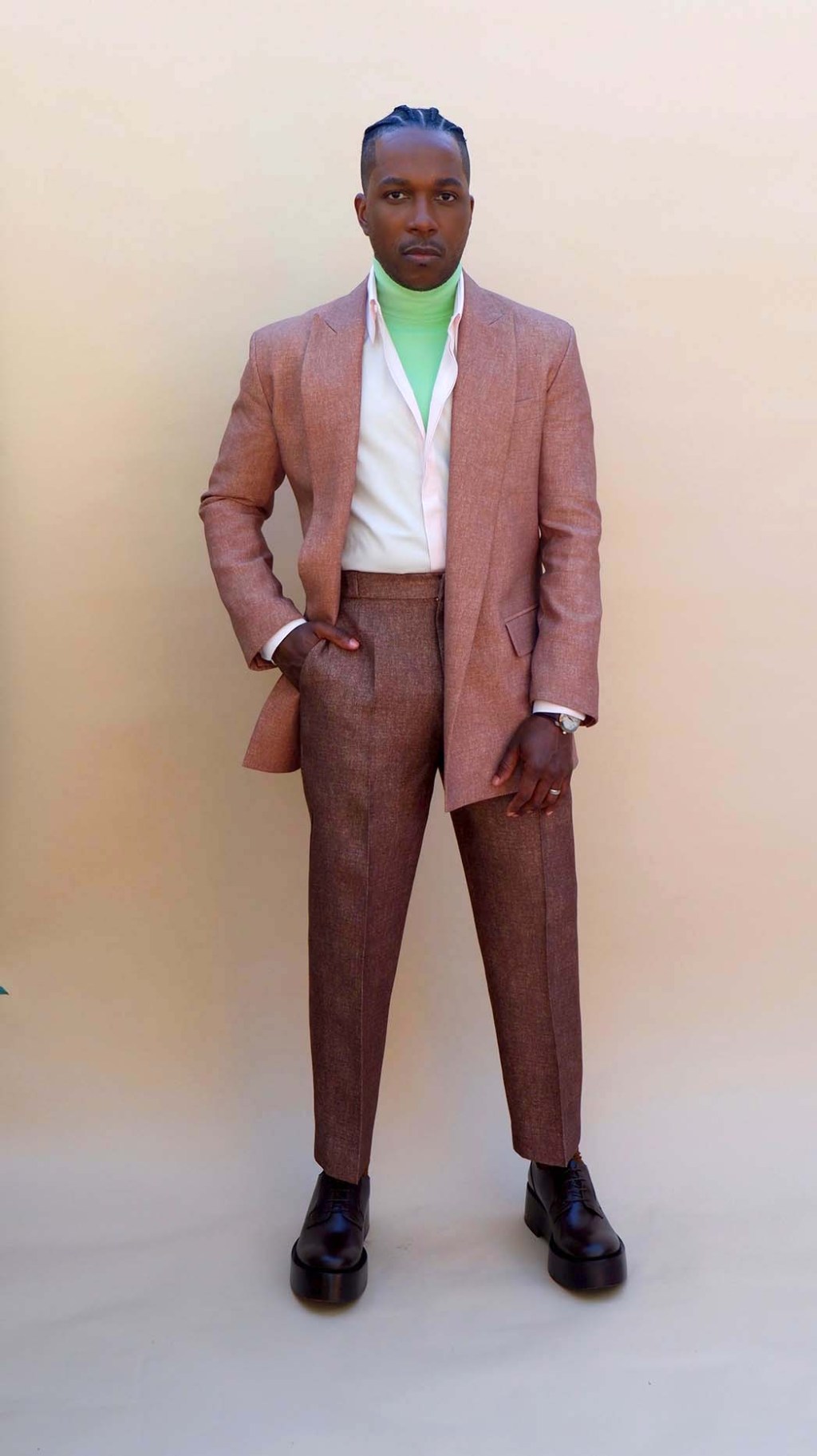 For Sunday night’s Golden Globes, the pair discussed putting together a look that felt like a modern take on formalwear. They ultimately chose pieces from Valentino’s spring/summer 2021 haute-couture collection — the first time the house has included menswear among its haute-couture offerings — mixing a chocolate brown trompe l’oeil-print wool suit with a pale rose poplin oversized shirt and a neon-green viscose cady turtleneck.

Both Yermagyan and Odom are fans of Valentino’s creative director, Pierpaolo Piccioli. “He designs from the heart,”says Yermagyan. “I operate the same way, and so does Leslie,” he says. “We like that what he does is timeless and elegant, but there’s also a punch to the look.” 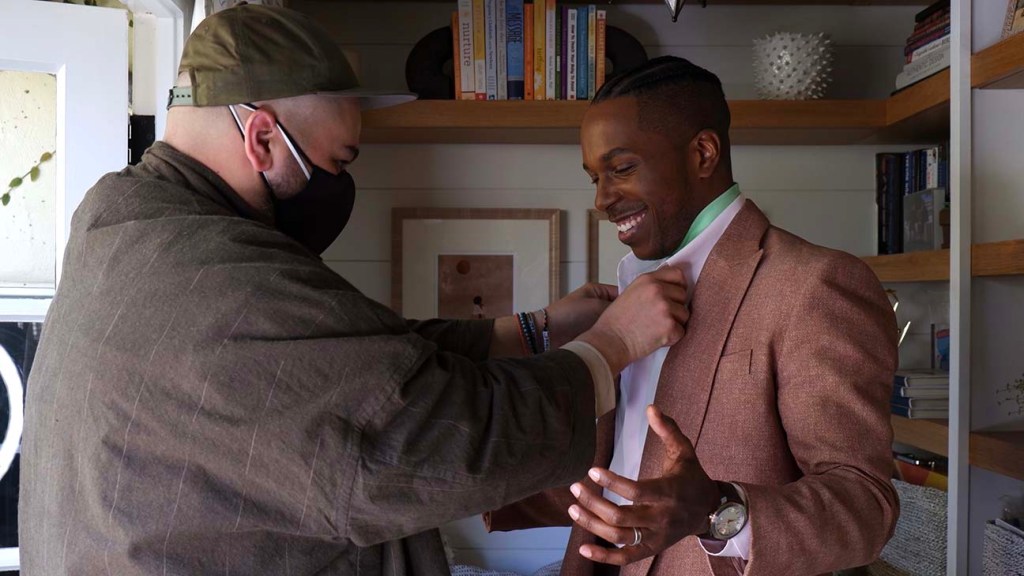 Odom finished the look with two pieces by Bulgari: the Octo Roma watch in steel with 18-karat pink-gold details on a chocolate alligator strap, and the B.zero1 four-band ring in 18-karat pink gold and bronze. “Leslie is a big fan of craftsmanship, and he also loved the subtlety of these pieces,” Yermagyan says. “Men are getting more and more bold when it comes to watches and jewelry, and that’s not exclusive to red carpets. Instead of subtly conforming to trends, they are making bolder choices that set them apart.” 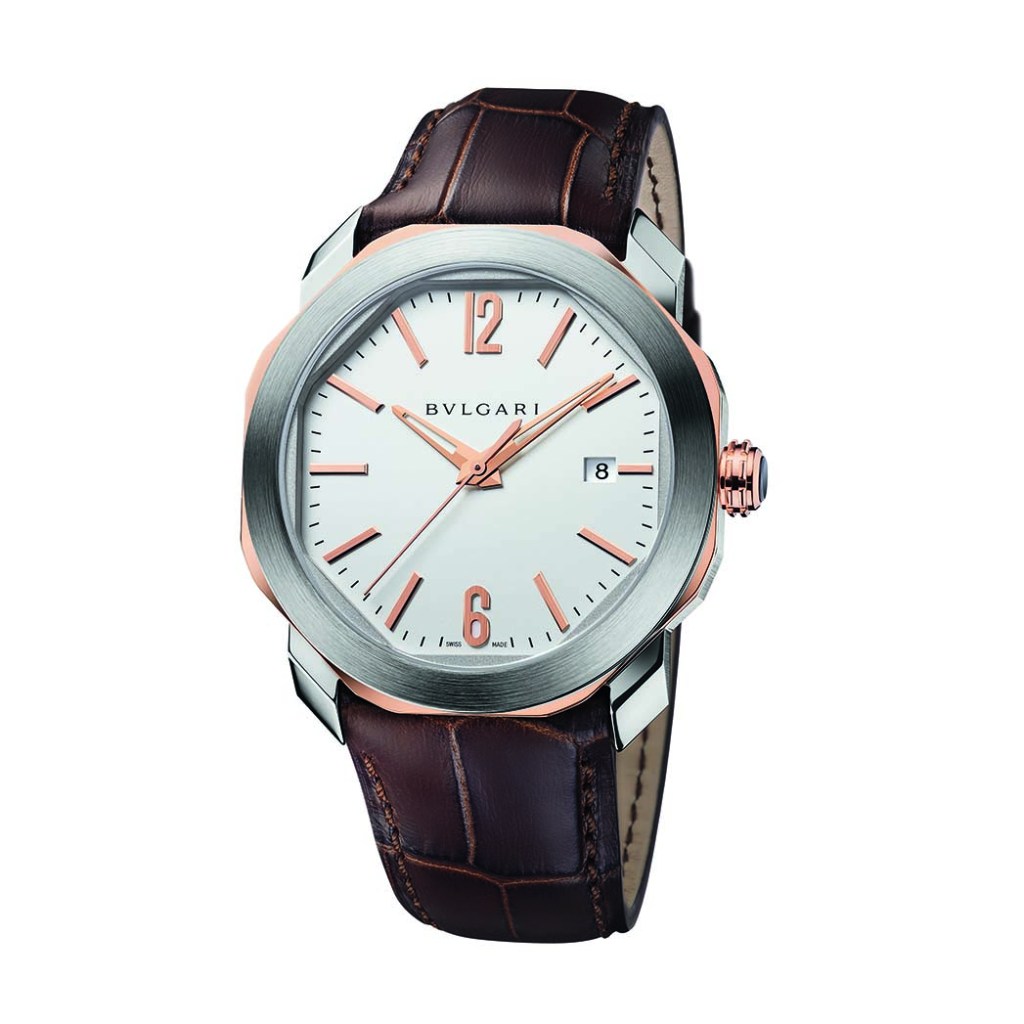 Like many stylists since September’s Emmy Awards, Yermagyan planned a backdrop and a photographer to ensure Odom’s double-nominee moment (both for acting and performing the original song, “Speak Now,” in One Night in Miami) would be captured. “We turned Leslie’s backyard into a Golden Globes lounge, complete with backdrop set up for photos,” the stylist says. “Even though we are all at home, it’s important to take a moment to celebrate art and toast to happy days.”