Hollywood Monuments to John Wayne, D.W. Griffith and More Are Under Fire: A Status Report

The Hulk took down Donald Trump. On Oct. 2, a man dressed as the famed Marvel character took an ax to President Trump’s star on the Hollywood Walk of Fame.

It was the latest in a series of attacks on Trump’s star, which is currently surrounded by metal fencing and buried unceremoniously under a tarp, partially obstructing the star of Kevin Spacey. Not everyone troubled by Trump’s presence on the Walk of Fame has taken the illegal route. In August of 2018, the City of West Hollywood passed a symbolic resolution urging the L.A. City Council and the Hollywood Chamber of Commerce, who have jurisdiction over the Walk of Fame, to remove Trump’s star. In 2019,  Star Wars’ Mark Hamill called for it to be replaced by one for his late co-star Carrie Fisher, prompting  #AStarForCarrie to trend.

For now, it seems Trump’s marker, which he received in 2007, is staying. “We don’t remove stars,” Hollywood Chamber of Commerce spokeswoman Ana Martinez, talking about the nearly 2,700 emblems that include Fatty Arbuckle, Michael Jackson and Bill Cosby, told the L.A. Times last year. “The stars are part of the history of the Walk of Fame.”

The drama over Trump’s star is part of a larger conversation. This summer, as Confederate statues came down across the U.S., California reckoned with its colonial treatment of Native Americans, resulting in protesters toppling statues of Father Junipero Serra, founder of the state’s Mission system. On July 20, a group of Native Californian activists pulled down a statue of Serra in the Los Angeles Plaza Historic District in downtown L.A., in solidarity with Black Lives Matter. (A memorial to Confederate soldiers once stood at L.A.’s star-studded Hollywood Forever cemetery, but it was removed in 2017.)

Here are five Hollywood icons whose tributes have been targeted as their legacies are debated. 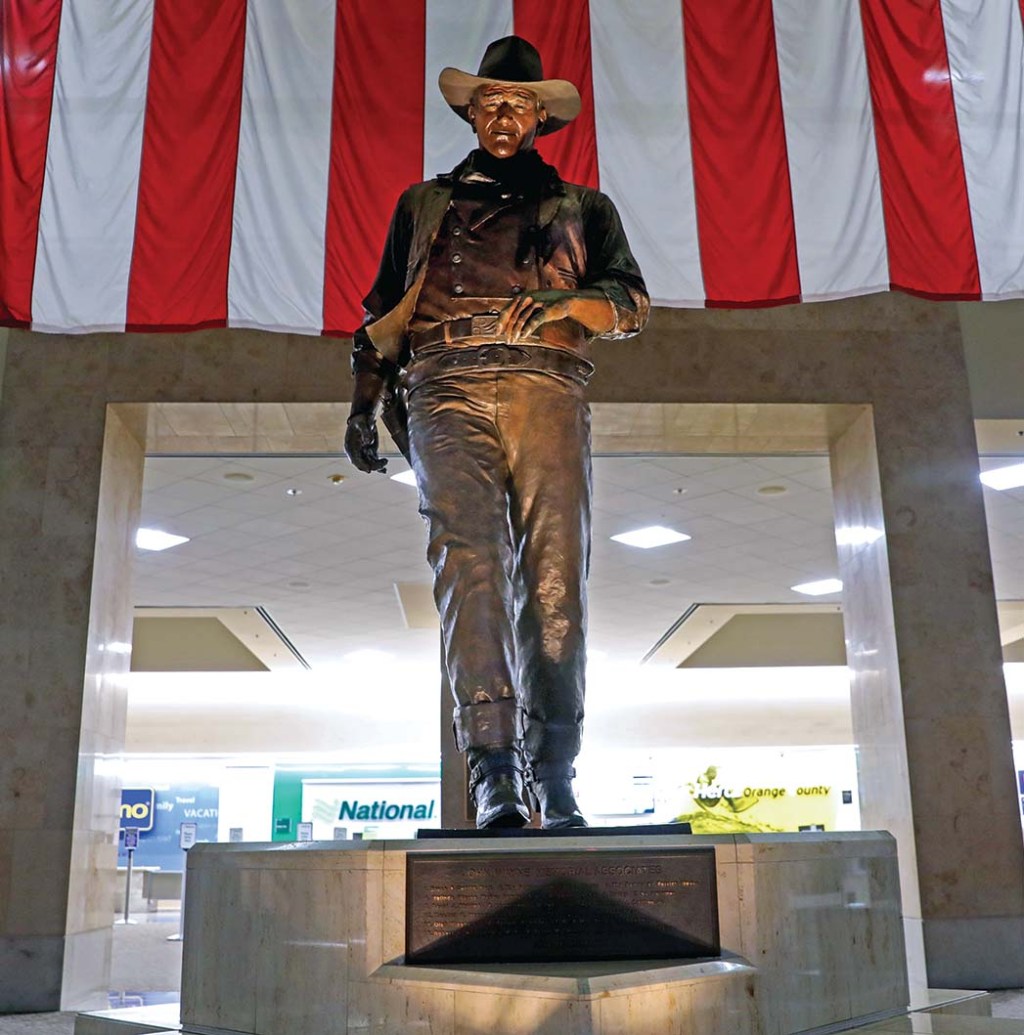 In June, the news agency Voice of OC published an op-ed written by Chapman University professors Fred Smoller and Michael Moodian calling for John Wayne Airport in Santa Ana to be renamed, citing racist comments by former Newport resident Wayne, particularly in a 1971 Playboy interview in which he voiced his support of white supremacy. According to Moodian, Wayne’s brand of bigoted, conservative masculinity represents the “old Orange County,” rather than the increasingly diverse and progressive O.C. of today. “They’re hateful comments, and it’s a really poor representation of who we are,” says Moodian. “It’s the wrong imagery for people who travel here. There’s this stereotype about the county to begin with, and then to top it off you name the airport after somebody who said rotten things about African Americans, Native Americans and the LBGTQ+ community — for us it’s an issue of branding.” Stars including George Takei and Sharon Osbourne voiced their support, while Trump tweeted that the proposal was “incredible stupidity!” The O.C. Democratic Party also adopted a resolution supporting the renaming. But Moodian points out that most Orange County politicians are wary of pushing the issue. “At the end of the day, the politicians didn’t want to touch it,” he says. However, in July, USC removed an exhibit dedicated to Wayne, an alum, that had been up since 2012, bowing to student pressure. Moodian predicts Wayne’s name will be removed from O.C.’s airport, at some point: “It didn’t happen this year, but I’ve got a 5-year-old Latino son. I’ll be very surprised if by the time he’s 30, he’s still living in an area with the airport named after John Wayne.” 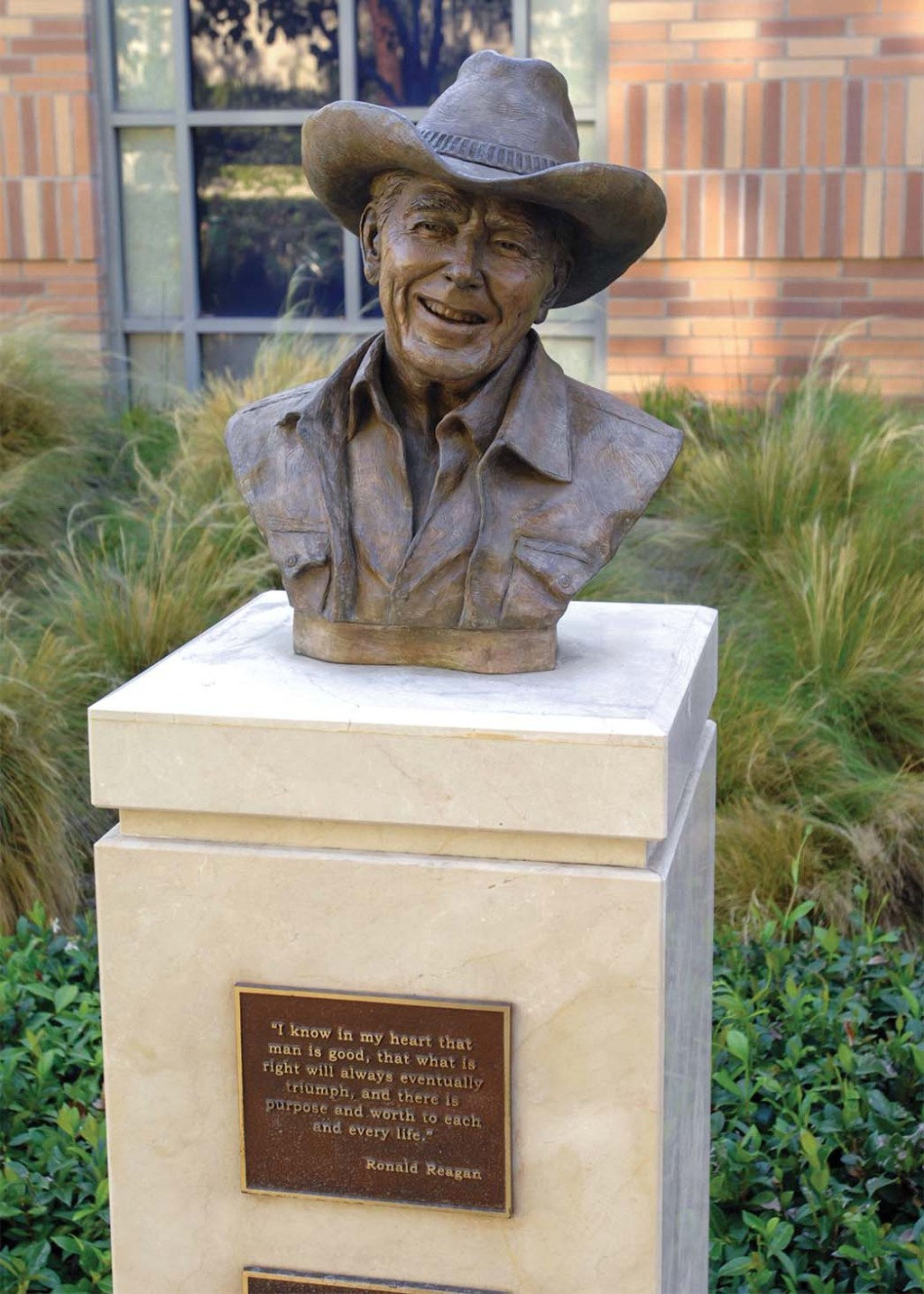 A student petition this year called for the removal of a bust of the conservative actor and 40th president on the Orange campus of Chapman University, stating that it would help create a “more inclusive environment for Chapman’s marginalized students.” However, the school’s president has opposed removing it. 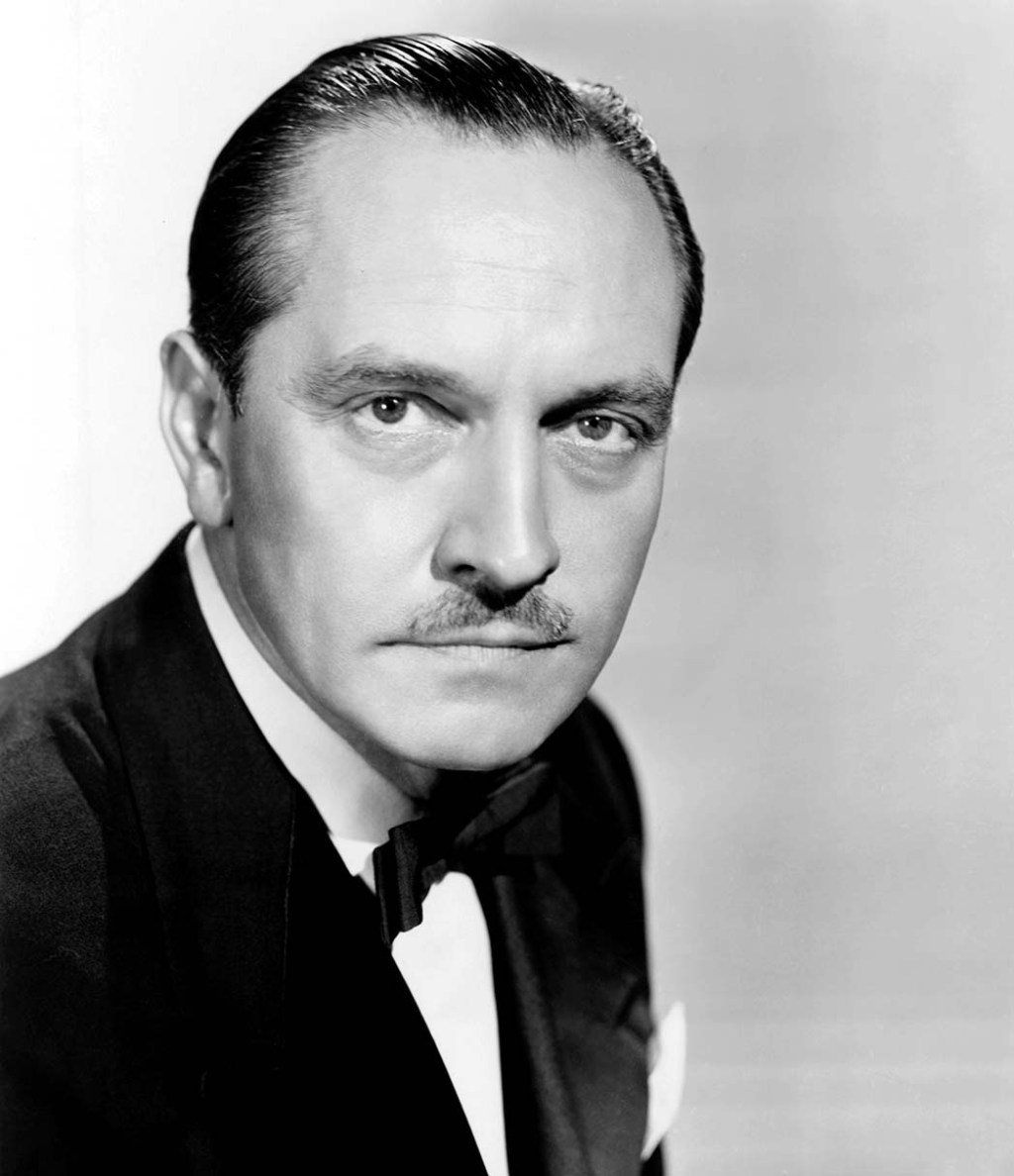 Golden Age leading man and civil rights booster Fredric March’s name was stripped from not one but two Universities in his native state of Wisconsin. These actions came about after it was discovered that March had briefly been a member of a fraternity called the HKKK (not affiliated with the national KKK) as an undergrad at the University of Wisconsin-Madison. March was branded a white supremacist on campus and online, despite the fact that he had been an outspoken proponent of civil rights during his five-decade career, working with the NAACP and other activist organizations. Overlooking these facts, the Fredric March Play Circle theater at UW-Madison was renamed in 2018, and in August, UW-Oshkosh stripped the name of the two-time best actor Oscar winner (for Dr. Jekyll and Mr. Hyde and The Best Years of Our Lives) from its theater. 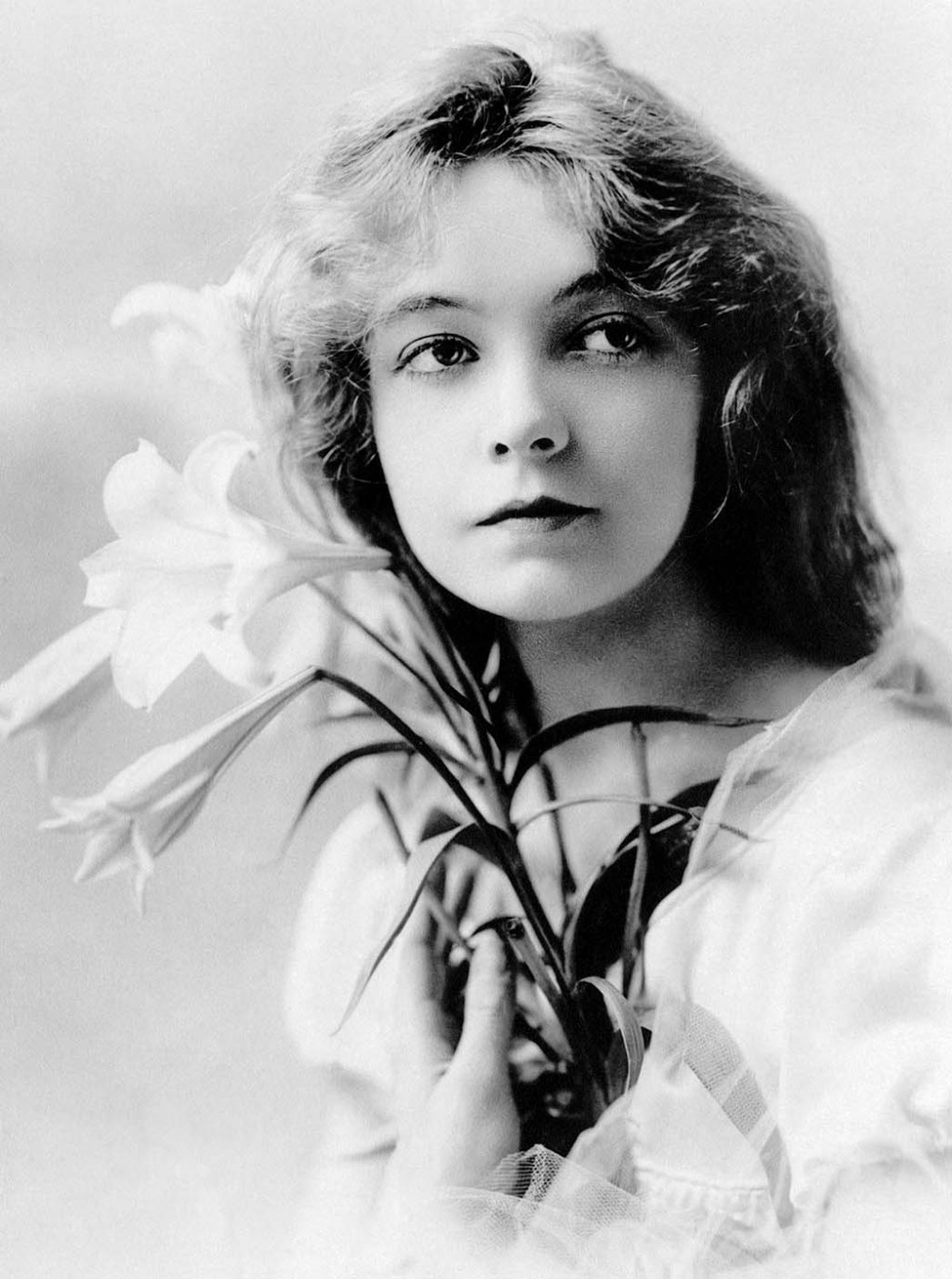 In 2019, trustees at Ohio’s Bowling Green State University voted to rename the Dorothy and Lillian Gish Theater because of Lillian Gish’s role in The Birth of a Nation. Fifty Hollywood heavyweights, including Helen Mirren, James Earl Jones and Martin Scorsese, sent a letter protesting the removal, but the university did not reverse its decision.

Change is coming to the Hollywood & Highland complex, which opened in 2001 and features the Babylon Court, a callback to the set of the director’s 1916 movie, Intolerance. The film was Griffith’s response to critics of his racist, pro-KKK epic The Birth of a Nation. For architect Daveed Kapoor, the center isn’t just bad architecture — it’s indicative of Hollywood’s backward stance on social issues. “I can’t believe in 2001, the Academy chose to be a part of this, because they were part of the process of designing this building,” he says. To Kapoor and many critics, the design represents the white, patriarchal culture Hollywood sold to Los Angeles and America over the decades.  In August, a new design by powerhouse firm Gensler was unveiled, with the court and its famed elephants removed in favor of a more streamlined look.

For Adrian Scott Fine, director of advocacy at the Los Angeles Conservancy, these controversies can spark important conversations. “I do think it’s up to the communities to have discussion and dialogue, and these things are opportunities to understand and learn about our past and past decisions, why things were decided the way they were,” he says.

A version of this story first appeared in the Dec. 16 issue of The Hollywood Reporter magazine. Click here to subscribe.