The night Charlie Carver envisioned a meandering outdoor oasis behind his Silver Lake bungalow took place well before lockdown. Two years ago, on an evening when the actor gave a moonlit mandolin recital at his house — “I’d ordered a nonrefundable mandolin, and it turned into an excuse to have a really sweet garden party,” he says — Carver and landscape designer John Sharp found themselves wandering through the property’s long-neglected tumble of pepper trees, ficus and weeds. Sloping steeply toward the 1903 home located on a double lot, much of the garden was cast in shade thanks to a sprawling 100-year-old fig tree.

Nonetheless, Carver (Ratched, The Boys in the Band) could see beyond the overgrown shrubs. “I wanted to bring some of Northern California into Southern California,” says the 32-year-old first-time homeowner, who grew up near Napa Valley in a “dilapidated farmhouse and cornfield” that his mother transformed into “a beautiful garden and renovated home.” But Carver’s vision went beyond childhood memories: Key to his concept was an outdoor entertaining area. And not just one but a series of spaces that could invite people (post-COVID) on a path of discovery. “When John came over, we were imagining little landings all down the slope with the idea of how fun it would be to have a party and stop and gather at a little station before continuing down to the next station,” says Carver. 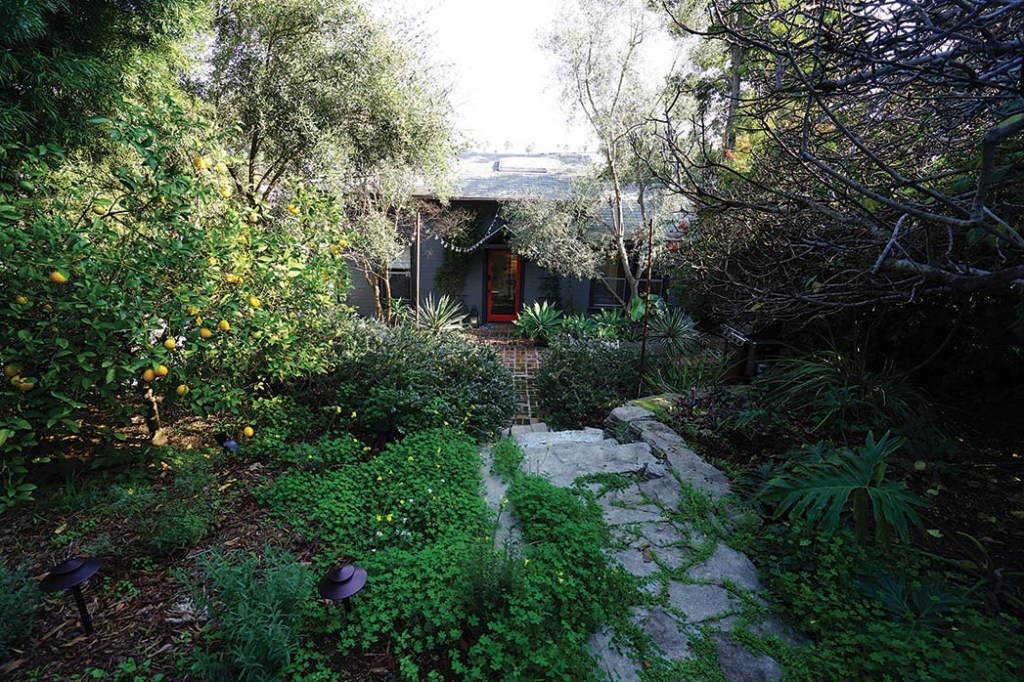 Last spring, Sharp, founder of Studio John Sharp, says Carver decided to take the project from “funny dinner conversation to actual actualization.” Work started in the early days of the pandemic, but Sharp was far from alone. Instead, in something of a genetic echo chamber, the crew involved Carver and his identical twin, actor Max Carver, sometimes lending a hand, along with Sharp and his twin, Nick. “I haven’t spent a lot of time around other sets of identical twins,” says Carver, who has worked alongside Max in Teen Wolf and The Batman, which took the brothers to London for filming this past summer. “Dealing with the dissonance between the fact that John and Nick look completely the same yet are completely different individuals was sort of a trip. It helped me realize that I probably contend with the same confusion that my brother and I are met with.” 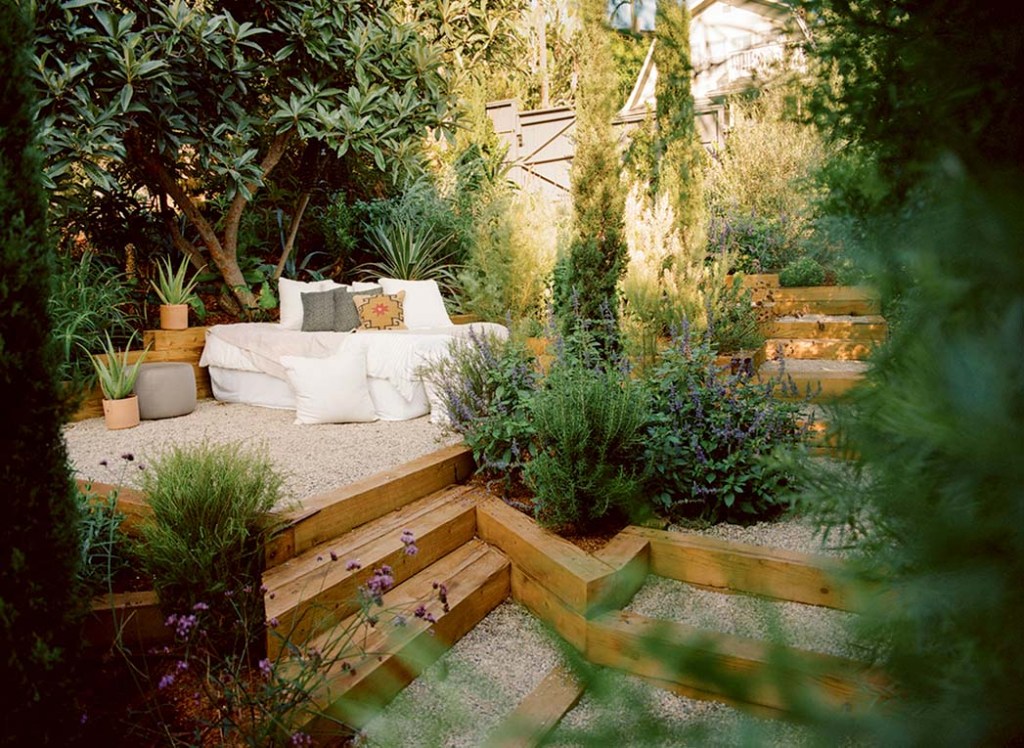 Today the fruits and flowers of those efforts have come into (almost) full bloom in a tri-tiered garden that curves from a lounge level outfitted with neutral-toned, sink-in seating, down to an English garden zone and, finally, to an expansive dining/barbeque space. “We wanted to make it feel like a country garden, approachable and not too elevated — a back-home, feel-good space,” says Sharp, who completed Sophia Bush’s garden in 2019 while also working on landscaping for properties by architects Richard Neutra and John Lautner.

And while Carver is still toggling to London for filming on The Batman, his home base has taken on a new dimension. “Plants give you such a sense of place,” he says. “I’ve felt that my whole life, and I have it right now in a way that feels like a portrait of this house and what I want out of this space. It feels like the beginning of a new chapter.” 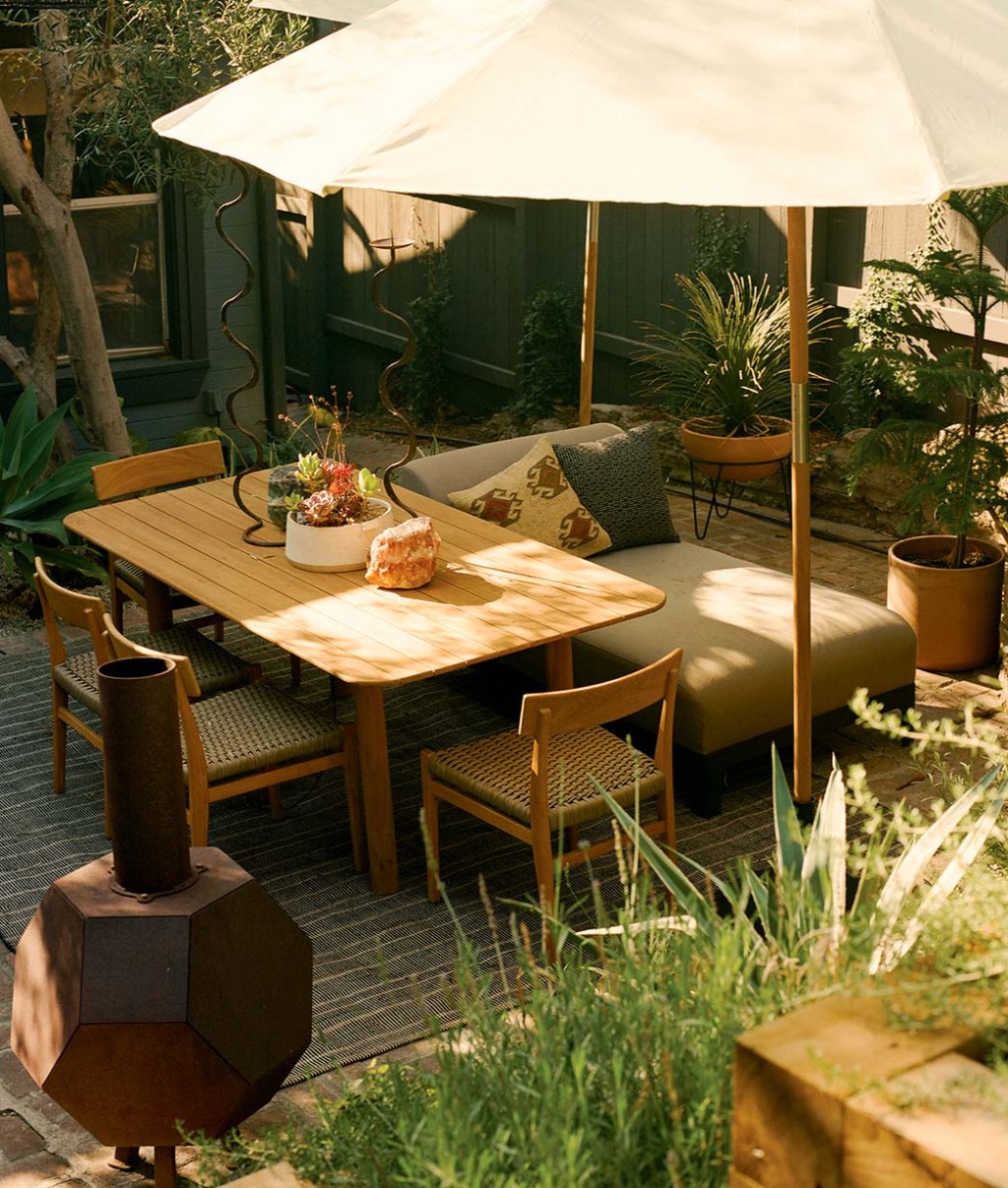 This story first appeared in the Jan. 20 issue of The Hollywood Reporter magazine. Click here to subscribe.