Inside the Costume Design of HBO’s ‘Perry Mason’: “There’s So Much Wear and Tear and Life”

On HBO’s new miniseries Perry Mason, wildly contrasting aspects of 1930s Los Angeles are spotlighted by differences in costume. “With the Great Depression happening and also with the movie industry happening, there was this strange juxtaposition in the city,” says Emma Potter, costume designer of the series, which stars Matthew Rhys as the famed private investigator. “We capture all of that, from a New Year’s Eve gala in a Hollywood studio to seeing people with nothing who migrating to the city from other states looking for work.”

Potter says that in her work on the show, which airs its finale Aug. 9, she above all wanted to “avoid a glossed-over or stylized feel from a costume standpoint.” To do that, she relied on original photography and documentation to get a sense of what people really looked like, including the book Quick Watson, The Camera — Seventy-five years of News Photography, edited by Delmar Watson, which documents the work of the Watsons, a family of photographers in Los Angeles. And from looking at shots by photographers like Dorothea Lange, she saw that, for many people of that era, “the clothing becomes like a second skin. There’s so much wear and tear and life on the garments. You saw how much life was on them and how much it had worn people away. They aged a lot faster and they were just more weathered. We were trying to find these real people. That was the driving force of the whole design process.” 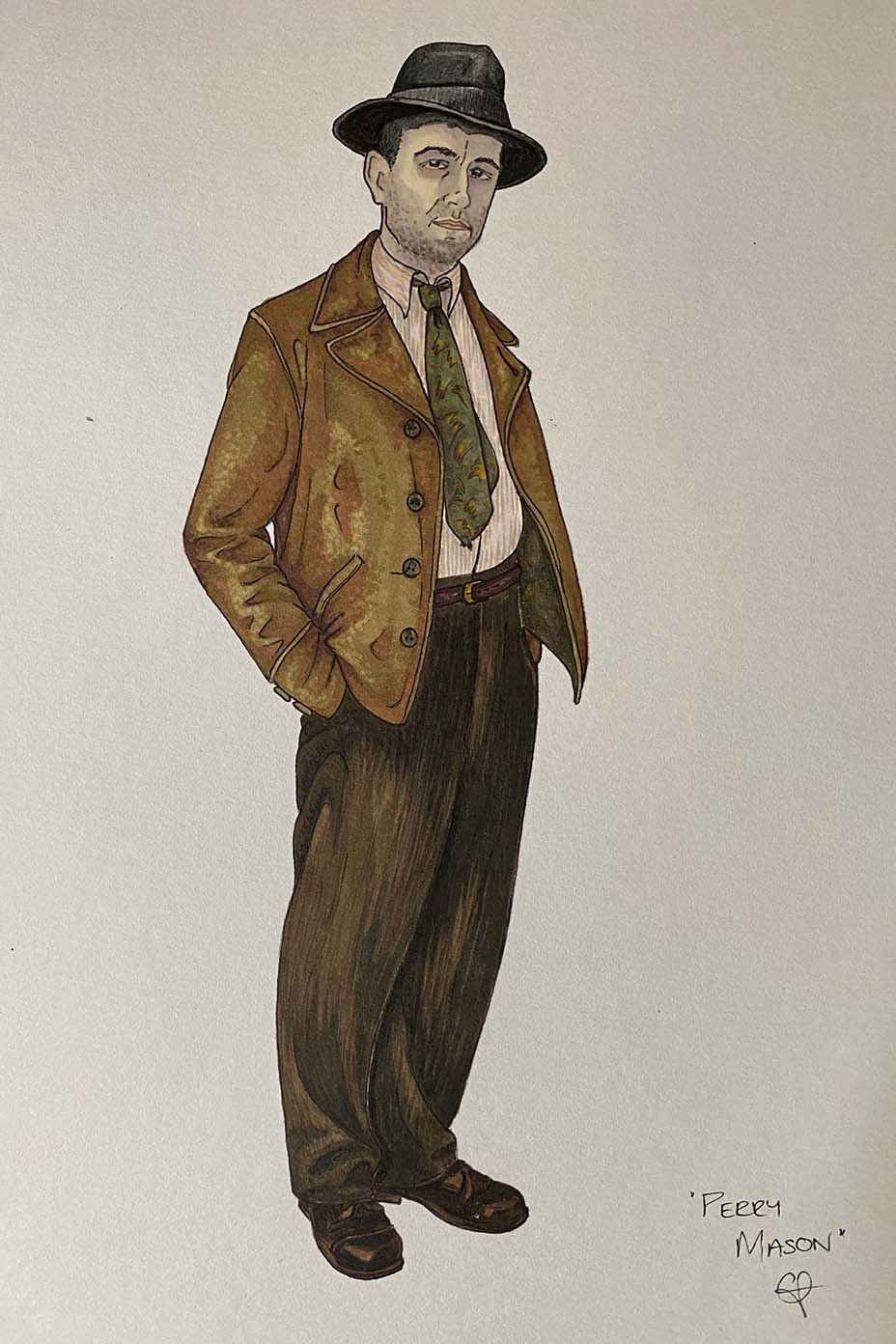 For the wardrobe of lead character Perry Mason, Potter leaned into that idea of wear and tear. “Mason looks like he just rolled out of bed. He’s very worn in and broken down and fraying,” says the designer, who put considerable effort into getting one particular garment, his jacket, just right. “We had this idea that we wanted him to have this kind of jacket that’s almost like a piece of armor, that he can kind of disappear within.” Potter looked at photographs from the era to decide on the proper silhouette, then started sourcing vintage jackets for Rhys to try on.

“It was important for Matthew and I to start from a place of vintage clothing even though we would have to build something for him. To put something old and worn on was an organic way to find this character that was so disheveled,” she says. Eventually she settled on a brown leather jacket for Mason and made up to seven versions of it, some with cigarette burns and buttons that have unraveled. “We had a great ageing and dyeing team who came in and spent a really long time breaking down the garments.” She also notes Mason’s habit of acquiring clothes from unusual places. “He’s just going around and scrounging up stuff. So nothing has to fit him right. Nothing has to make any sense. His clothing might not fit as properly as other people’s garments. It might actually be a bit big for him but he’s comfortable in it and he can move around in it.”

While Potter stresses that Mason “is who he is,” for most of the other main characters, there are interesting differences between how they present themselves publicly and how they are when they are alone. “When they are in their own homes, they are very different people. All of them have these other aspects of their lives,” says Potter (who was the costume designer on season three of HBO’s True Detective.)

That’s especially the case with Sister Alice, played by Tatiana Maslany, who is loosely based on the evangelist Aimee Semple McPherson. In her public role at her church, “she has this stage presence,” says Potter. “She almost kind of feels like a leading lady. She’s this celebrity icon who people are gravitating towards. She’s a real spectacle. So something I enjoyed learning was that the actual Sister Aimee had her gowns made by people who were designing costumes for films.”  In the series, Sister Alice’s gowns are “very glamorous silken gowns with this pearlescent quality in red, white and blue or gold and and silver. She is very glossy,” says Potter. 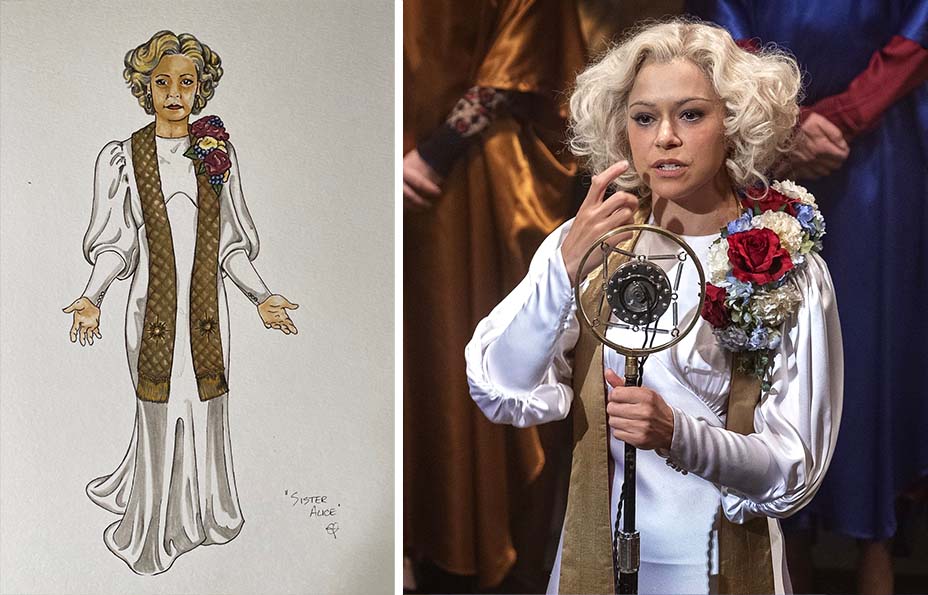 But when Sister Alice is at home, “she’s a different character,” says Potter. “I don’t want to give too much of that away, but the version of her that is at home or backstage, who’s not in her performance clothing, is a completely different look. It’s that juxtaposition of the character’s public and private sides that is always so compelling for me.”

For the character of Paul Drake, a beat cop, played by Chris Chalk, the costume designer consulted the book Defender of the Angels, A Black Policeman in Old Los Angeles, published in 1969, written by Jess Kimbrough about his experiences in the early decades of the last century. “[Kimbrough] wasn’t the first Black police officer. LAPD had Black officers starting in the late 1800s and the numbers increased as the city grew. He was however the first to write an account on his time,” says Potter. 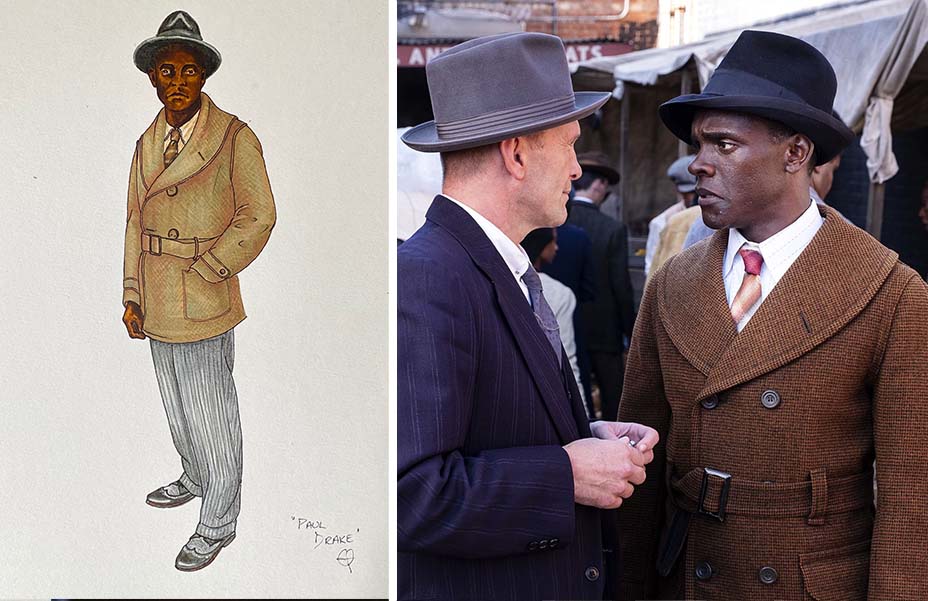 On the show, Drake is fastidious about his appearance. “Chris and I worked really closely on figuring out what it means when he’s in his police uniform. He probably keeps himself a little neater, a little more polished than the other officers around there. He pushed himself a little bit harder,” she says. When he’s not working, one of Drake’s signature pieces is a brown knit pea coat. “It’s another favorite piece in how strong and unusual it is,” says Potter, who consulted Bette Yarbrough Cox’s book Central Avenue: Its Rise and Fall, 1890-c1950: Including the Musical Renaissance of Black Los Angeles and looked at images of what musicians wore when playing at the Dunbar Hotel’s night, a center of the jazz scene in L.A. “I remember [executive producer and director] Tim Van Patten posing a question of what does Paul wear to church or out for a date with his wife and that spurred the whole creative process for me.  He was so good at inspiring the design process in a really organic way.”

To put together Perry Mason’s costumes, Potter relied on a variety of sources, working closely with Western Costume Company as well as other costume shops such as Palace Costume, MPCC and American. She built many pieces in-house and collaborated with makers such as Serj Custom Tailoring for men’s suiting, Bill Hargate Costumes (for Sister Alice’s gowns) and Anto for men’s shirting. Himel Brothers made Rhys’ leather jackets. 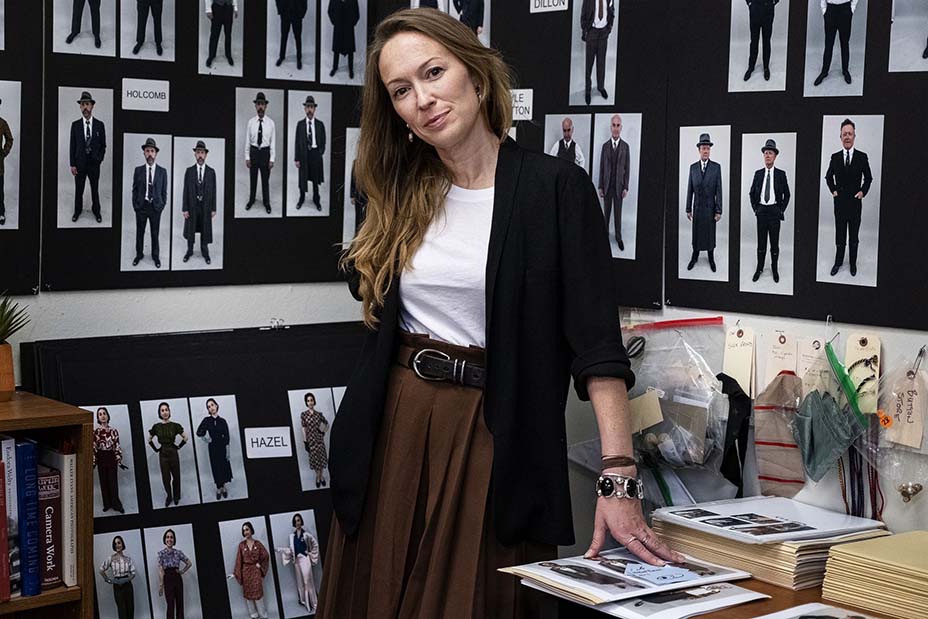 But she didn’t want to go overboard and create wardrobes that were too extensive for the era. “It’s not a time period when everyone has a lot of clothing,” she says, pointing for example to the character of legal secretary Della Street, played by Juliet Rylance. “It was really important for us for certain characters such as Della to have a pretty small, concise closet and to repeat the clothing, to make sure that every time she steps out of the door she doesn’t have a different outfit. Someone like Della is going to really take care of her garments and you see the mends or repair work she would have done.” 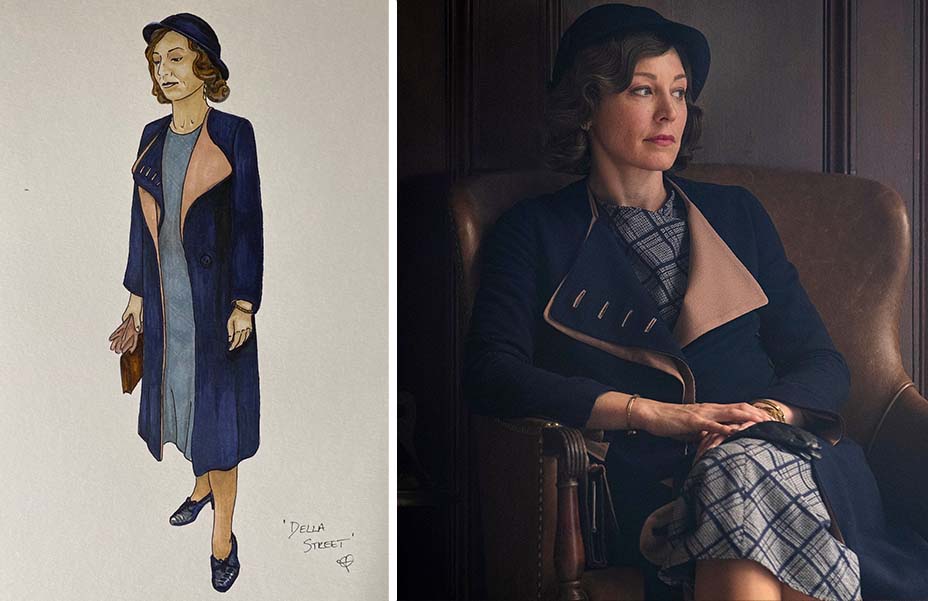