L.A. Restaurants Embrace Outdoor Innovation: “This Is like Dining in a Piazza in Europe”

On July 1, California governor Gavin Newsom once again shut down indoor dining for L.A. County (and expanded the mandate state-wide on July 13), capping off a rollercoaster four months for Los Angeles restaurants. Between many eateries offering takeout and delivery for the first time to the normalizing of masked, socially distanced meals, restaurants have had to consistently be flexible and innovative as the coronavirus pandemic — and its accompanying ever-changing rules — rages on.

Though indoor dining is off the table for the time being, a number of L.A. hot spots have devised ways to welcome back guests through al fresco dining, creating outdoor dining spaces in their parking lots, alleys and sidewalks.

Local favorite Osteria Mozza and its partner business Pizzeria Mozza have combined for “Piazza Mozza,” an outdoor dining space behind the restaurants with a joint pizza and pasta menu. The area, which can hold 30 guests at a time, was previously used for deliveries and staff parking: “At first I was like, ‘There’s no way we’re going to make this look nice’ because it wasn’t particularly attractive, but I think everyone was surprised at how well it turned out,” says Mozza’s director of operations Kate Greenberg. 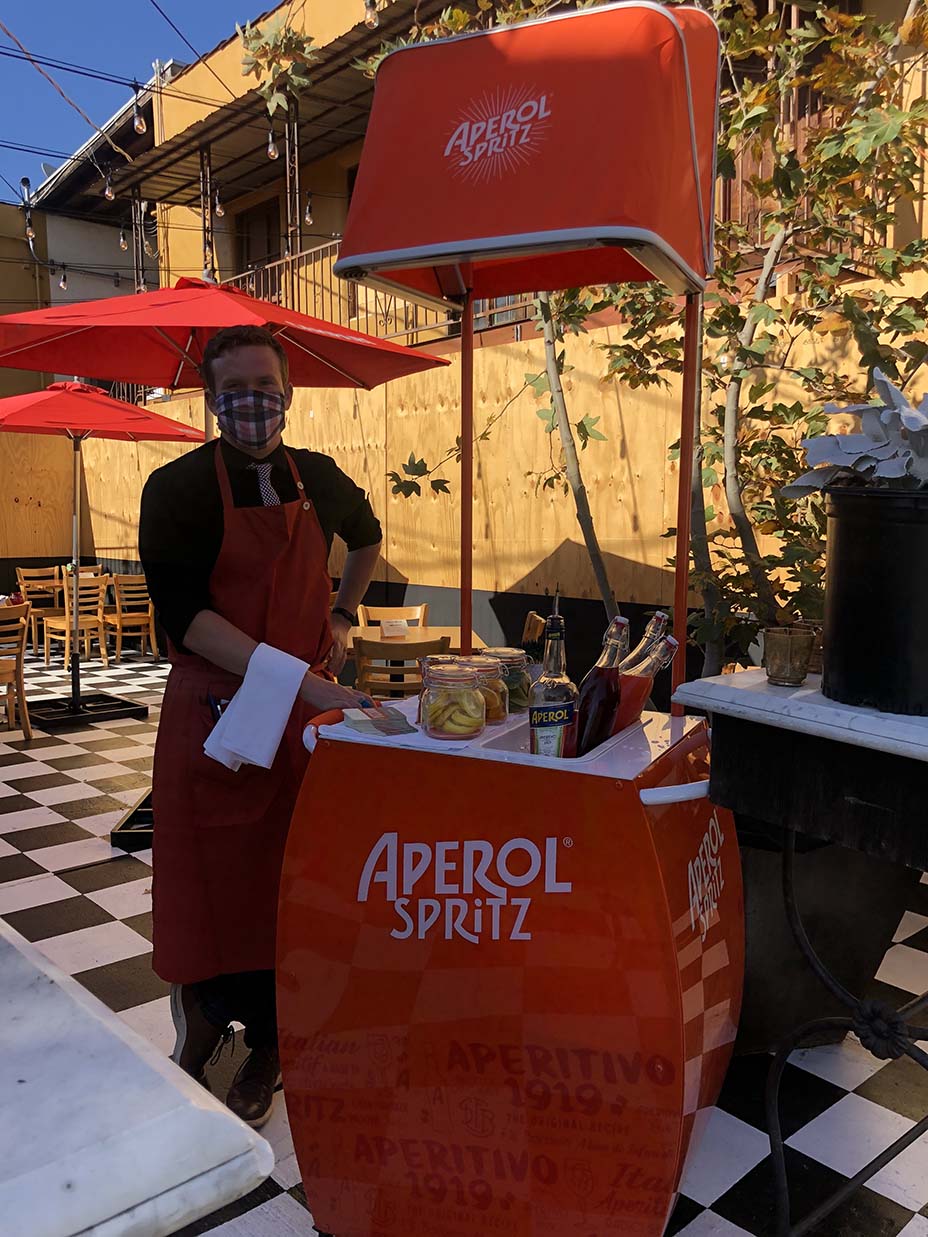 The remodel included painting the asphalt into a checkerboard pattern and repurposing plywood, which had been used to protect the building’s windows during recent racial justice protests, to create a closed-off area with tables and chairs from inside. Since opening the space two weeks ago, Greenberg says they’re averaging 70 diners on a weeknight and more than 100 per night on the weekends. In order to fully comply with safety precautions, the restaurant has also scrapped its traditional tableside service, like adding olive oil or bread crumbs to dishes.

“All of that stuff has to be done in the kitchen,” she says. “It just made it more efficient service but certainly less of a show.”

Walter Manzke, the chef and owner of both Republique and Petty Cash, has also sought to innovate his restaurants, turning Republique’s parking lot into a patio dining space that can hold 70 patrons. The space, which will open for dinner service on Thursday, has been painted using the same reds and blues as inside, along with trees, rugs and painted asphalt.

The new patio replaces Republique’s previous setup, which featured tables and chairs alongside the La Brea sidewalk; Petty Cash is doing the same along Beverly, with tables and chairs that can seat 30 to 40 at a time, and although “we’re at nowhere near the capacity that we were” when indoor dining reopened, Manzke says, “it’s also better than getting more in debt, so it is offsetting that and it is helping us and this small team.”

Connie and Ted’s has also taken over its West Hollywood parking lot for its “Boulevard Dining Room,” which general manager Matthew De Marte says was designed to keep its “West Coast-East Coast clam shack vibe” going with ivy walls, green astroturf and red umbrellas. The space can sit 40 people and in the week it’s been open, has consistently increased its number of customers by 20 to 25 percent per day, De Marte says. “We don’t really advertise other than just our own Instagram — it’s really just word-of-mouth. I see people driving by and slowing down or walking by and taking pictures and it really warms my heart,” he says. 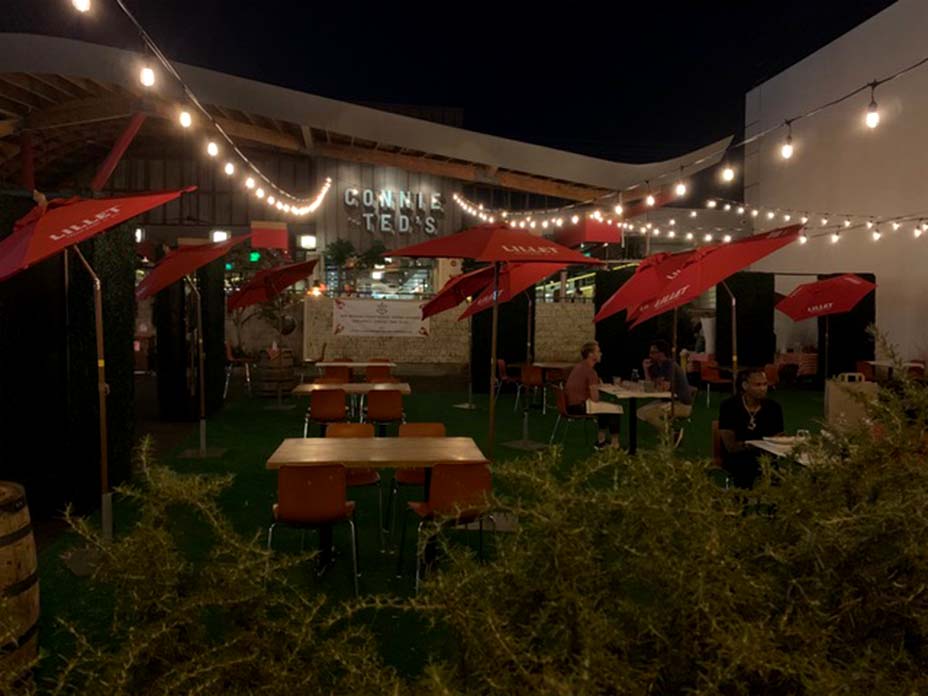 Across the city, other L.A. favorites have done the same, with Spago expanding into the Canon Drive cul-de-sac to include 125 seats; Craig’s has unveiled outdoor dining for the first time, Redbird has set up multiple dining courtyards, Bar Restaurant has taken over its valet lot and Culver City’s Hatchet Hall has created a patio area. Across the board, restaurants say they are following the city’s safety guidelines and are taking precautions to sanitize, social distance, enforce mask policies and test employees, which have not seemed to hamper guests’ experiences: “There’s been a lot of very positive feedback that this is like dining in a piazza in Europe,” says Spago’s executive chef Ari Rosenson.

One concern, though, has been the success of outdoor lunching during Los Angeles’ hot summer days. De Marte says that Connie and Ted’s had no lunch customers during its first weekend — “even under umbrellas, it’s still 100 degrees” — but by 6:30 p.m. when the sun had gone down, the place was full. Greenberg says Mozza has similarly struggled “to find a way to monetize the day” with the Hollywood heat, so is working on a plan that would entice customers. 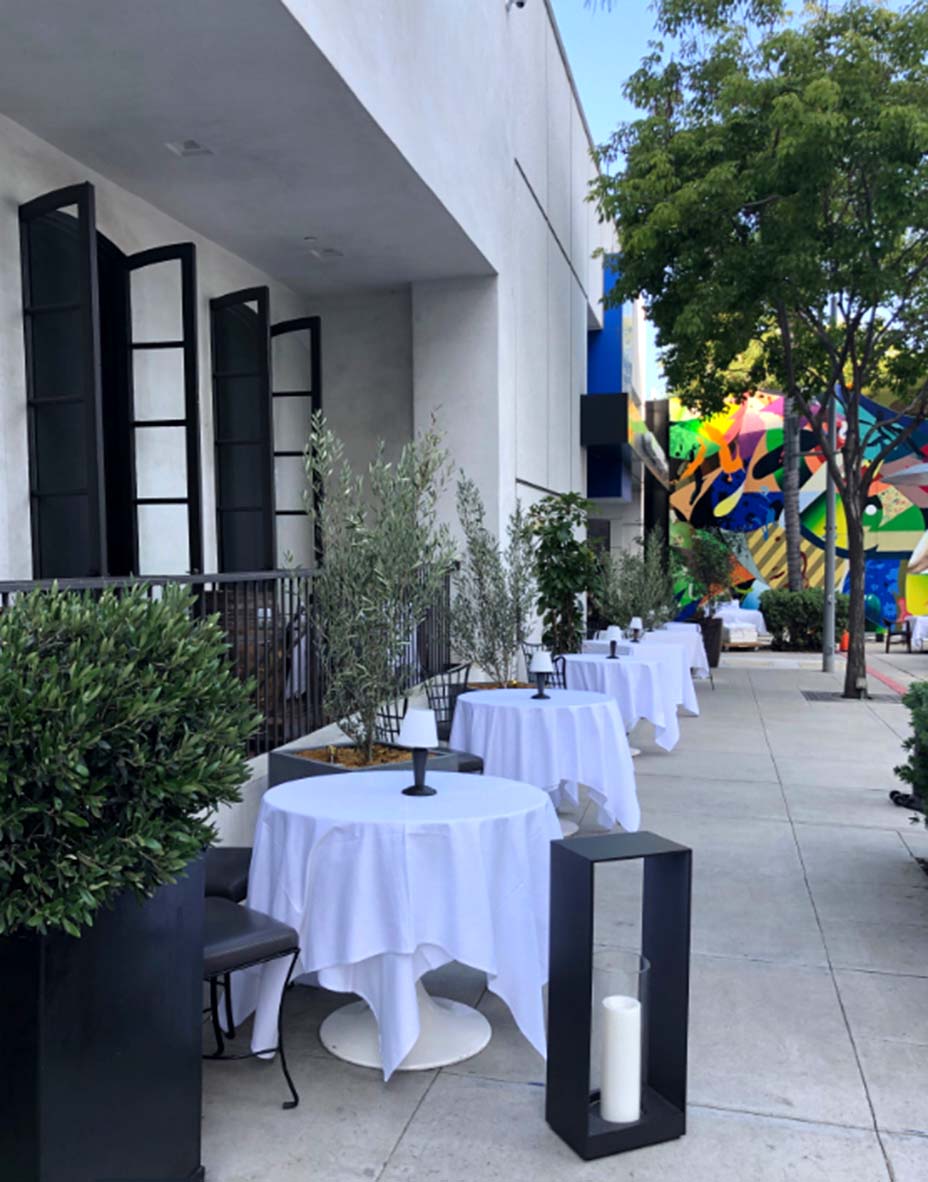 Manzke has noticed that the late-night crowd is gone as well: “We used to have a lot of guests that sat at 9:30,10 p.m. and I don’t think that exists at the moment. There’s not that late group because there’s not really any nightlife — the clubs aren’t open, so everybody is tending to arrive at 7 p.m.”

And while some see outdoor dining as a temporary band-aid until dine-in service returns —“there’s no question that if this goes through the end of the year, it’ll be really hard,” Greenberg says; Rosenson notes Spago’s financial hit from its popular banquet space going unused — others are preparing for the long haul. 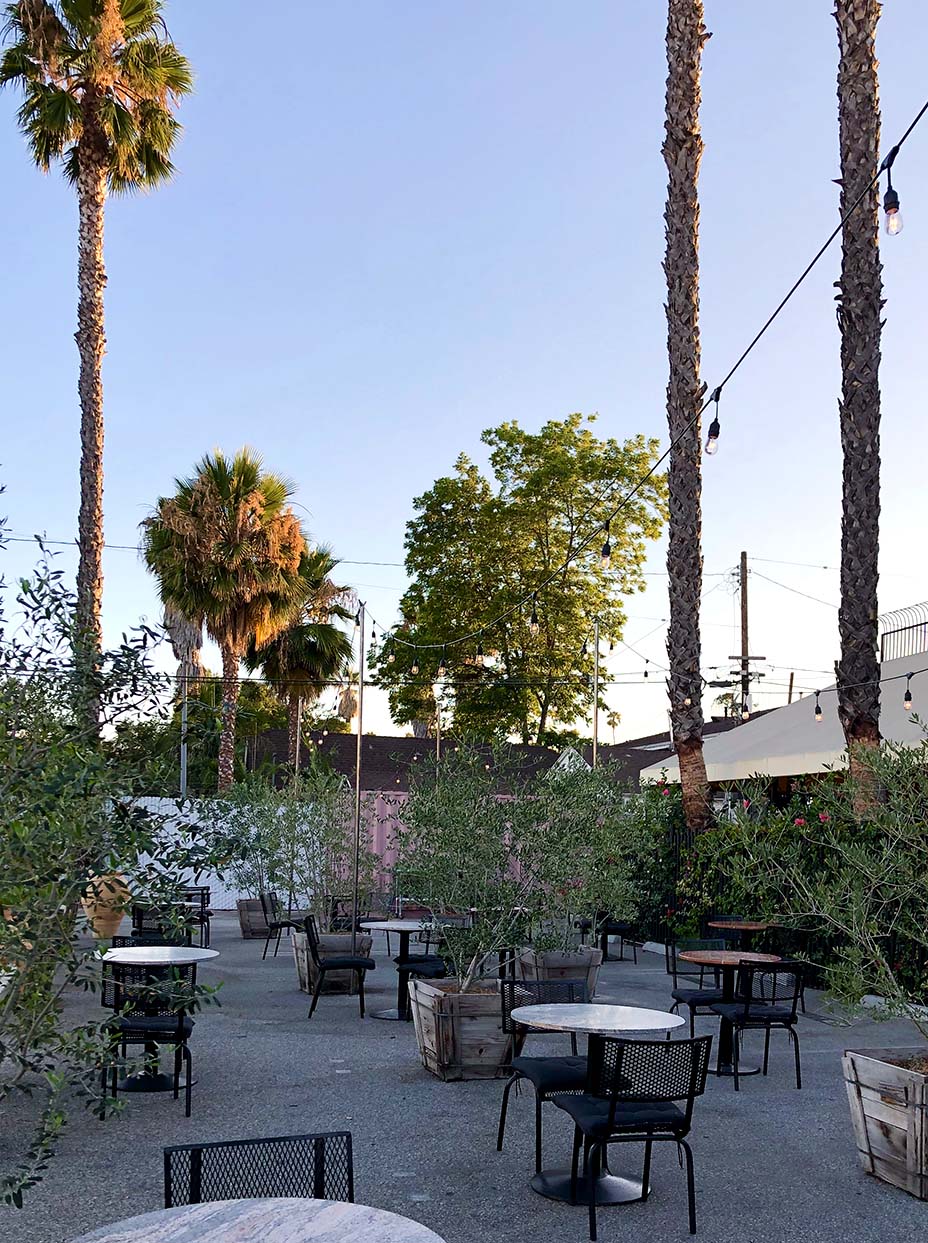