Ok look — I’m a good parent. I love my kids, I’m fun-ish, and I try to raise my children practically. My wife and I look at each parenting situation not through lenses tinged with that saccharine faux-nostalgia perpetuated by family movies — but with empirical evidence and reason.

But this year, my practicality coupled with my daughter’s new passion for free-market economics brought about an untimely demise for the diabetic philanthropist known as Santa Claus.

I should first contextualize my daughter. She is six years old, but has talked like she’s 40 since the day she was three. She argued recently that I should be responsible for cleaning up her toys because technically speaking, I own the house so her room is my “property.” It’s like living with a miniature Johnnie Cochran who can’t tie her shoes.

I’ve honestly always been surprised she believed in Santa at all, but it was a little bit of magic in the life of a kid who will probably be the only outspoken atheist in her 3rd grade class, so we went with it.

Back in November I suggest our daughter ask Santa for a new bike since she was learning to ride a two-wheeler. She agrees, and boom: Christmas shopping is done a month early, great job awesome dad.

But on December 15th, my daughter’s reading the Target Christmas catalogue, casually flipping through it and circling every other item like she’s ordering tapas, when she runs across this: The Disney Frozen 2 Power Playdate Water Nokk.

This is a horse. A plastic horse that measures three feet long, two and a half feet tall, lights up or plays music or some shit, and costs one hundred and fifty dollars.  And it is in this fateful moment that my daughter decides this is what Santa will be bringing her – not the “boring” (some would say “sensible!”) bike that was already hiding for her in our tool shed.

So my wife and I are at a crossroads. Normal parents (fun-no-“ish” parents) would have considered returning the bike and buying this piece of equestrian garbage, but as usual we take the utilitarian approach.

First of all, this monstrosity is going to take up a lot of space that we don’t have.  We live in a modest 3 bed, 1.75 bath Los Angeles home that we bought for just below asking price at 98 million dollars.

And we know, even though our daughter does not, that she doesn’t actually want this horse. We’ve been through this before. She will play with it for a maximum of 40 minutes (cumulative) and then we will have a new piece of furniture that requires D-batteries.

So we decide Santa will not be cramming a Water Nokk down our chimney. We reason she might be a little disappointed on Christmas — but she’ll learn the important lesson that you can’t always get what you want.

However it becomes very clear very quickly that our daughter will not be learning this lesson. She tells everyone she knows that Santa is bringing her this immobile light-up thoroughbred and she just can’t wait.

We try to pump the breaks at every turn, but no matter what we say, our daughter counters with unassailable Santa logic.

We warn that she never told Santa she wanted the Water Nokk. She replies “but he’s always watching me, so he saw me circle it in the catalogue and he’s listening to this conversation.” We say Santa has probably already made her bike and he’s too busy to build her something else. She says “but he has tons of elves who can make anything – they’ll just do it.” We suggest that perhaps it’s too late in the game to spring a change like this on poor Santa Claus – to which she responds “but he’s magic. He can bring me anything I dream of.”

Santa is basically like Jeff Bezos for kids. He can bring anything in the world to your house for free and does so using questionable labor practices. At this point most parents would cave in the name of “holiday spirit,” but my wife and I stick to our guns, reminding ourselves that this will be a character-defining moment in our child’s life, and that we really don’t want to pay $150 for a horse.  So Christmas morning comes, the kid likes all her presents, and we believe we’ve done some good parenting while committing the perfect crime.

But when the hedonistic yuletide high of stockings and candy canes wears off, our daughter suddenly starts to weep and runs into her room. I go in to comfort her, but am met by a pissed-off six-year-old who launches into her scorched-earth thesis statement.

“I didn’t get the Water Nokk so I don’t think Santa actually came.” Uh oh.

“All the kids think Santa is real, except for me, who got the information.” We’re toast. “His handwriting looks like yours.” She did forensics?!

“And I think you bought me the bike instead of the Water Nokk because it was cheaper.” That one hurts because it’s both very mean and very true.

I just sit there silently because I knew lying to her further would only make things worse. If your girlfriend accuses you of being at a strip club when you come home at 3AM covered in glitter, it does you no favors to say “actually – I just blew up a Hobby Lobby.” My wife and I spend the rest of the day feeling like the villain in a Christmas movie (a really bad one played by Alan Rickman.) We were so cheap, we crushed our daughter’s sense of childhood awe.

And now we’re in a tough spot: do we come clean? Like a deadbeat husband, does “Santa” try to win her back? In my darkest hour, I abandon every one of my parenting convictions and suggest we buy the Water Nokk, put a bow on it, throw it on the roof in the middle of the night, and tell our daughter that Santa must have dropped it up there like a big fat idiot.

But cooler heads prevail. We decide doing that would send the wrong message, and quite possibly turn her into a Kardashian-Jenner.

So instead of addressing the Santa situation, we deployed a tactic pioneered by parents thousands of years ago who needed to teach their kids about sex: we didn’t address the problem at all and are hoping it goes away.

But an interesting wrinkle to the story occurred this week. My daughter recently made a brief appearance on a TV show (not our choice – if you live in LA and don’t put your kid on TV, it’s punishable by six months in federal prison.) And as a result she had a check in the mailbox, with her name on it, for a total of $200.

If you’re doing the math, that is almost the exact amount of money you need to purchase a useless LED water horse (plus shipping and handling.)

Granted, this is all the money she has in the entire world, and she is about to blow it all on a plastic version of something that appeared on screen for roughly three minutes in her second favorite Frozen movie.

But it is pointed out to us by our four-foot Supreme Court Justice that when somebody earns their own money, they should be able to spend it on whatever they want.

Without using this phraseology, our daughter informs us she now has “fuck you money,” enabling her to circumvent the bureaucracy of Christmas all together. We had to admit, that is actually pretty practical.  And honestly it takes some of the sting out of her discovering the truth about Santa because she doesn’t need him anymore. He is now merely a weird bearded middleman who lives at the mall.  So anyway — this now lives in our kitchen: 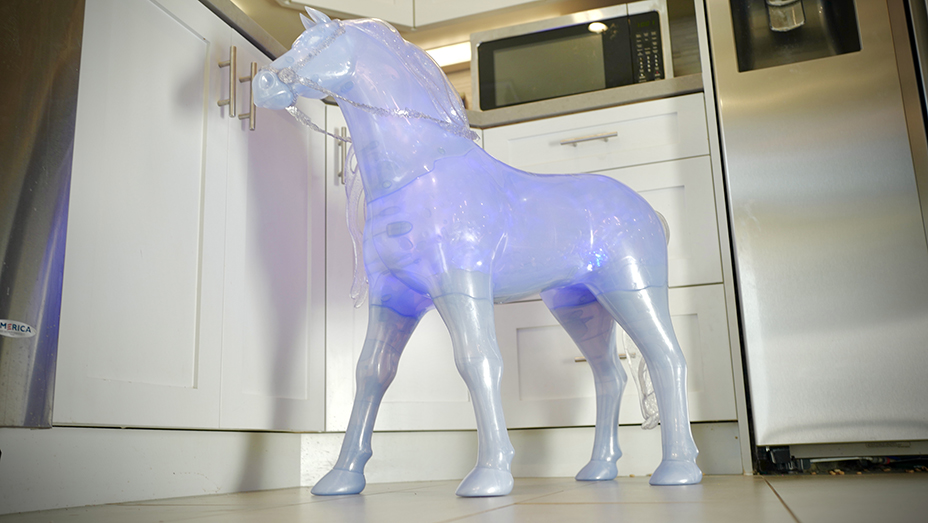 And what did our daughter learn from this fiasco?

Well, she learned that her parents prioritize the conservation of floorspace over her sense of wonder.

She learned that adults spend a whole month every year creating an elaborate Westworld-style reality around their children where a magic present man monitors their behavior and innermost wishes through the power of telepathy.

And she decidedly did not learn that “you can’t always get what you want.” In fact, she learned the complete opposite. You can get whatever you want, as long as you are an independently wealthy child actor.

So I recant my opening statement. I am not a good parent.