In his new book, Playing the Palace (Berkley), Rudnick tells the story of American event planner, Carter Ogden, who is not only surprised to learn that he has met Edgar, the Prince of Wales, but also finds himself falling in love with him. Though what could appear as a magical fairy tale proves to be anything but. Prince Edgar and Carter may be opposites attracted to each other, but they are soon forced to question whether love could really conquer all — including the queen of England. Will their love be worth worldwide attention, public scrutiny and more?

In the romantic satire, with a release date to be announced at a later date, Berkley says Rudnick writes with humor as he explores “the unrealistic expectations we set for ourselves and others around love and relationships.”

Prior to Playing the Palace, Rudnick’s writing credits include Addams Family Values, In & Out and HBO’s Coastal Elites. His previous novels include Social Disease and I’ll Take It, as well as young adult novels Gorgeous and It’s All Your Fault. He also released a collection of plays and essays entitled I Shudder. Rudnick is currently writing the book for the Broadway musical adaptation of The Devil Wears Prada.

Below, The Hollywood Reporter shares an excerpt and cover reveal of Playing the Palace.

On the subway I experienced a first-date panic attack ultra-sized by the royalty aspect. On one hand, Prince Edgar had remembered my name and asked James to locate me, but once Edgar took a closer look he’d instantly recall fifteen previous royal engagements – and why had it taken him two weeks to ask me out? I must be sufficiently hot stuff to attract a Prince, which meant that my new tricep routine at the gym was paying off, but my abs were still nowhere near as ripped as they should be, and why was I basing my entire concept of self-esteem on Instagram photos of impossibly fit guys? But maybe English people weren’t as buff, so on a sliding international scale I was a catch, or maybe this whole thing was part of a scavenger hunt where Edgar had been required to find a hopeless American dweeb, or maybe I should just text him that I was flu-ish and needed to cancel and then throw myself on the subway tracks, so I’d be enshrined in Edgar’s memory as his lost, perfect love.

Or maybe I should do something sensible, like imagining Ruth Ginsberg slapping me and saying, “You’ve got a date with a prince! Stop being you! And just be yourself!”

Once I’d reached the enormous plate glass doors of the 5-star Tribeca restaurant Edgar had chosen, a place which had managed to remain on-trend for an unthinkable ten years, I tried to examine my reflection, but just as I was squinching my features into a sad variation on one of Callum’s rugged cologne ads, the one where he’d smelled like “the savage mystery of the Sierras”, the doors swung open, I leapt backwards and James appeared.

“You’re late – why am I not surprised? His Majesty is waiting, and I’m assuming that all of your decent clothing has been stolen. Follow me.”

As I struggled to keep up, James led me past a dining room filled with well-dressed, gossiping diners, all glancing up from their phones to see if I was anyone worth noticing, and then jerking their heads away to make sure I knew that I wasn’t. But they were also ignoring the tiny squibs of artisanal, farm-to-table delicacies on their enormous white plates, so I was in good company.

“You will address His Highness solely as Your Highness, you will wait for His Highness to sit and speak first, you will ask no personal questions, your replies to whatever His Highness may ask must remain brief and modest, and you must not entertain the slightest notion of becoming anything beyond an ill-advised footnote in His Highness’s daily calendar. Am I understood?”

“Okay?” James repeated, as if I’d spat on his lapel.

James stared at me and every part of me shrank many inches. Then, and I can’t be sure of this, but James did something with his face that was his version of a smile, and it occurred to me that James wasn’t just the most clinically English person of all time – he was gay. “Darling,” he said, “don’t worry. You’re doomed.”

Then he opened a door, flanked by two security guards, and ushered me into a private dining room, a hushed chamber with lustrous mahogany wainscoting, jewel-toned Venetian brocade wallcoverings and a brass chandelier I’d once seen on 1St Dibs, valued at twice my yearly salary.

Prince Edgar, the ultimate luxury object, was standing beside a table draped in at least three layers of fabric, and set with a warehouse’s worth of china and crystal. I felt like James Bond, about to be offered an assignment, or maybe a handful of uncut diamonds.

“So good to see you again,” said Prince Edgar, offering his hand.

“Your Highness,” I said, suppressing my instinct to kneel and be knighted.

James did that thing of rolling his eyes without my catching him doing it.

“Edgar,” I decided, because I’m sorry, he just wasn’t an Ed. Ed shows up to fix your air-conditioning; Edgar has more than one home. More than ten homes.

“Thank you, James, I think we can manage from here.”

“As you wish. If you need me I’ll be just outside or reachable by text. Should Mr. Ogden exhibit symptoms of violent derangement, what will you do?”

As James backed gracefully out of the room, Edgar gestured to the gilded chair opposite him, where I hovered, waiting for him to be seated first. He sat. I sat.

“First off, please ignore whatever nonsense James has told you. And secondly, I’m so sorry it took me such an inexcusable amount of time to locate you, but I was attending a refugee summit in Dubrovnik and then visiting an agricultural school in Somalia, and then an Australian scientist was gracious enough to demonstrate a new economically feasible desalinization system, which turned out to be quite promising but required three days in Melbourne.”

“Same,” I said and Edgar smiled, not his full-on heartbreaker, but a satisfying preview.

“But James worked his magic and now here we are. And don’t you look handsome.”

I couldn’t do it. I couldn’t sit across from this great-looking, well-mannered Prince, this person in total command of his role in the world, and hold a conversation, as if we were two guys who’d liked each other’s decently accurate photos, had texted a bit, and decided to risk it, with roommates and Netflix as a backup. This wasn’t normal. I felt like there was a whole other person squirming around inside my skin so after opening and closing my mouth three times like a guppy I finally let loose:

“How? How does this work? How do I talk to you as if you’re a person? Like, a person person?”

Edgar smiled, at almost full wattage but not quite, although even at, say, 8.2 on the Regal Smile Continuum, his slightly crooked grin made me levitate, I’m not kidding, I could swear that I was floating an inch or so off my chair.

“I understand. And I find that in these situations, it’s best for both of us to wipe the slate clean, to eliminate any and all preconceptions, and to behave simply as two human beings getting to know one another.”

“Thank you. Totally.” Totally? Did I have an armload of scrunchies and a troll doll sticker on my phone?

“I wait for my relatives to die so I can rule England.”

“Okay, this isn’t fair, because like everyone else in the world, I already know way too much about you. I mean, America is obsessed. And even though I was a kid, and so were you, when your parents passed away…”

Edgar’s smile vanished, and I knew I’d destroyed everything. He spoke in a cordial but icy tone, very this-is-my-polite-way-of-saying-fuck-off.

“It was heartbreaking and awful and yes, even though James tried to hide them, I did see the photos of the plane crash, and equally terrible and far worse things have happened to many other people, but thank you very much for your concern.”

Why? Why did I do that? Why did I bring up the greatest tragedy of Edgar’s life within the first five minutes? All of my paranoia had been completely justified – I wasn’t just an interloper and a commoner and a douchebag, I was light years out of my league.

As I stood up and my linen napkin fell to the floor, I thought about grabbing it, and thumbtacking it to my bedroom wall, as a reminder of how badly, and how quickly, I’d fucked up. And now Edgar was standing as well.

“Stop, please. You must stay. This is entirely my problem. Because you’re right, people do know a good deal about me and they make assumptions, which makes me back away, and I end up feeling self-righteous and snobbish and alone.”

We looked at each other, more directly.

“I get it. It must be so strange, being you. And dealing with the rest of us. You’re like – Beyonce.” 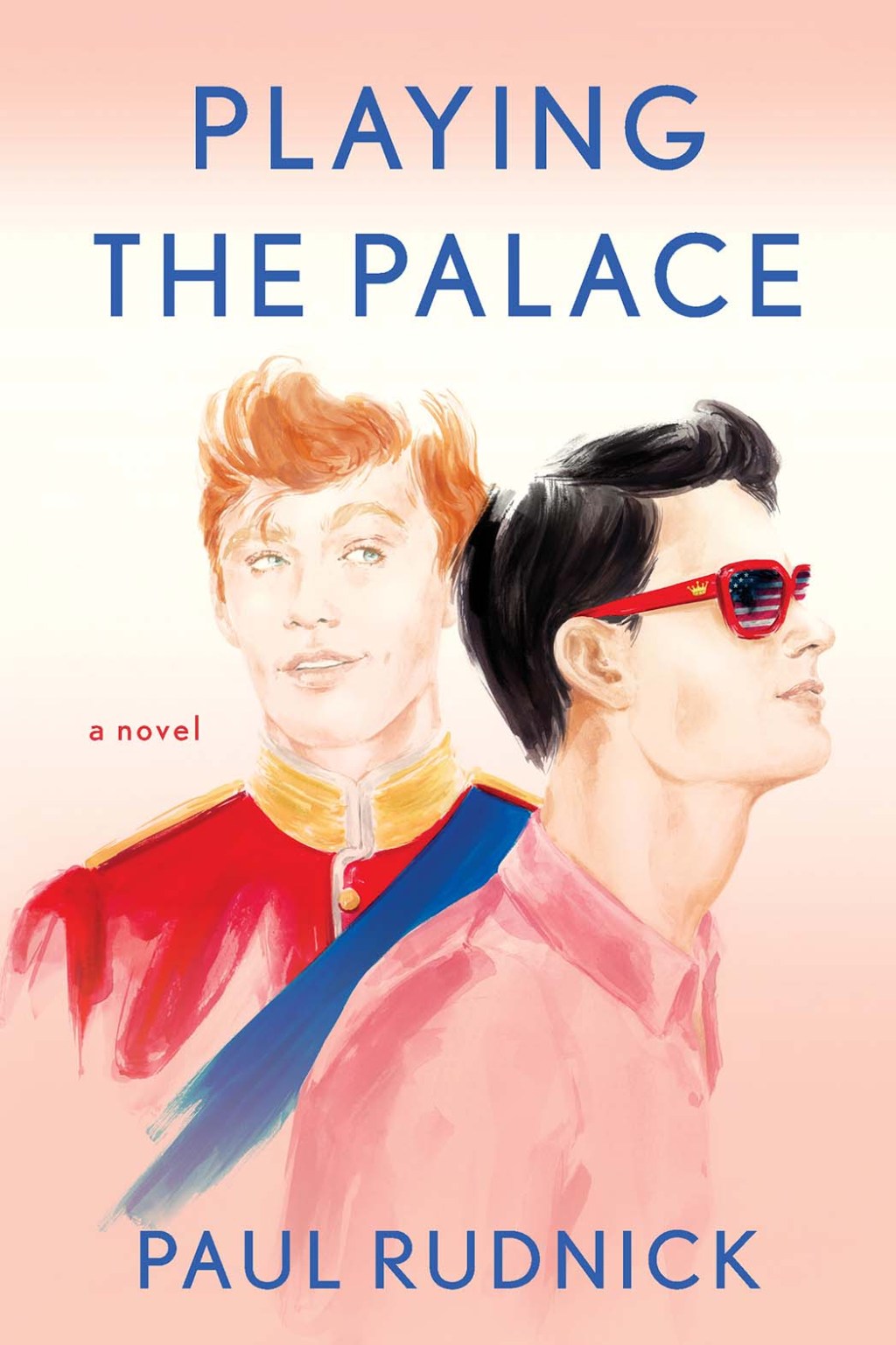