No stranger to designing looks for fictional African royalty with the exotic Black Panther’s Wakanda, costume designer Ruth. E. Carter was the first person who director Craig Brewer called about creating the stylish world for the new film Coming 2 America, out this weekend on Amazon Prime Video.

“In a way, we both had a similar challenge. How do we update the style and culture of Zamunda while preserving the look and themes of the original?,” says Brewer who previously worked with Carter on Dolemite is My Name.

“This conversation led to the creation of my favorite costume accessory for King Akeem [Eddie Murphy]. Borrowing from the style of King Jaffe Joffer in the first film, we replaced the real lion head and skin draped around James Earl Jones and turned it into a large golden broach that held his cape in place. Ruth brought up the point that Akeem has three daughters, and they would be against wearing real fur.” 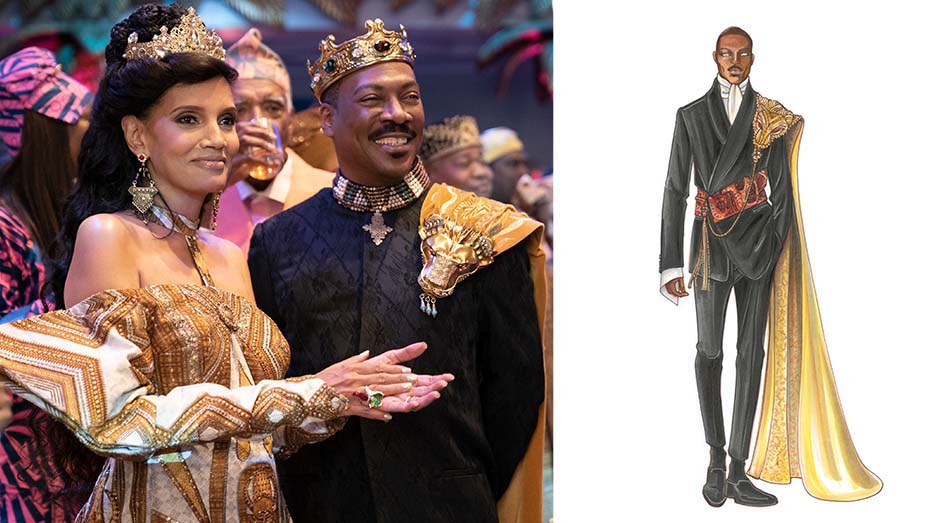 Carter’s solution was to modernize the opulent creations from the 1988 original, noting, “We know a lot more than we did 30 years ago about Africa and needed to be a little more sophisticated in Zamunda. I came up with a Zamundan story, while sharing the beauty and pageantry the first film offered.”

The modern styles created by Carter for Coming 2 America translated into “large-scale beautiful African prints” and “gorgeous shapes” as the designer looked to fashion on a global scale. 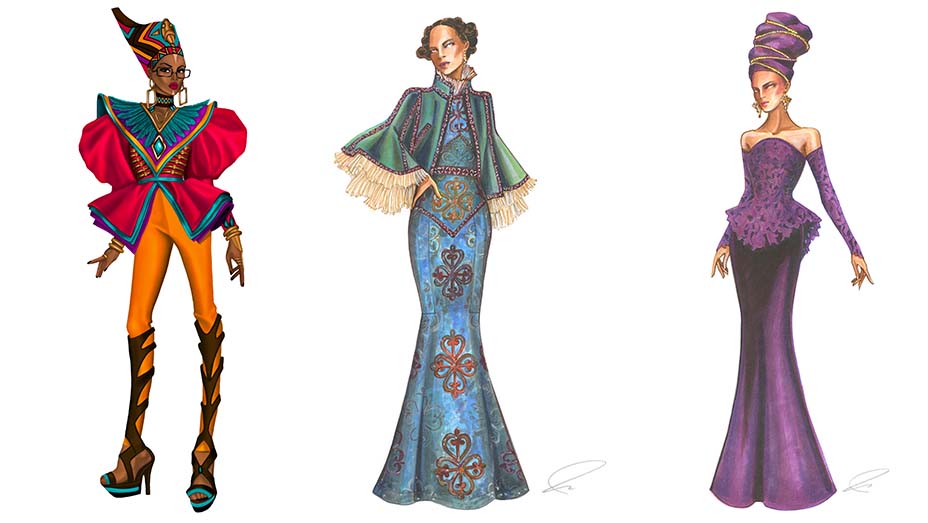 “Zamunda had a world view, and the Queen in the first film wore an Indian sari. When we see Lisa [Shari Headley] in the current film at the dining table having dinner with Mary Junson and her son Lavelle [Leslie Jones and Jermaine Fowler], she too is in a sari. I brought in India and mixed it with African symbols, and they made it their own,” Carter tells The Hollywood Reporter. 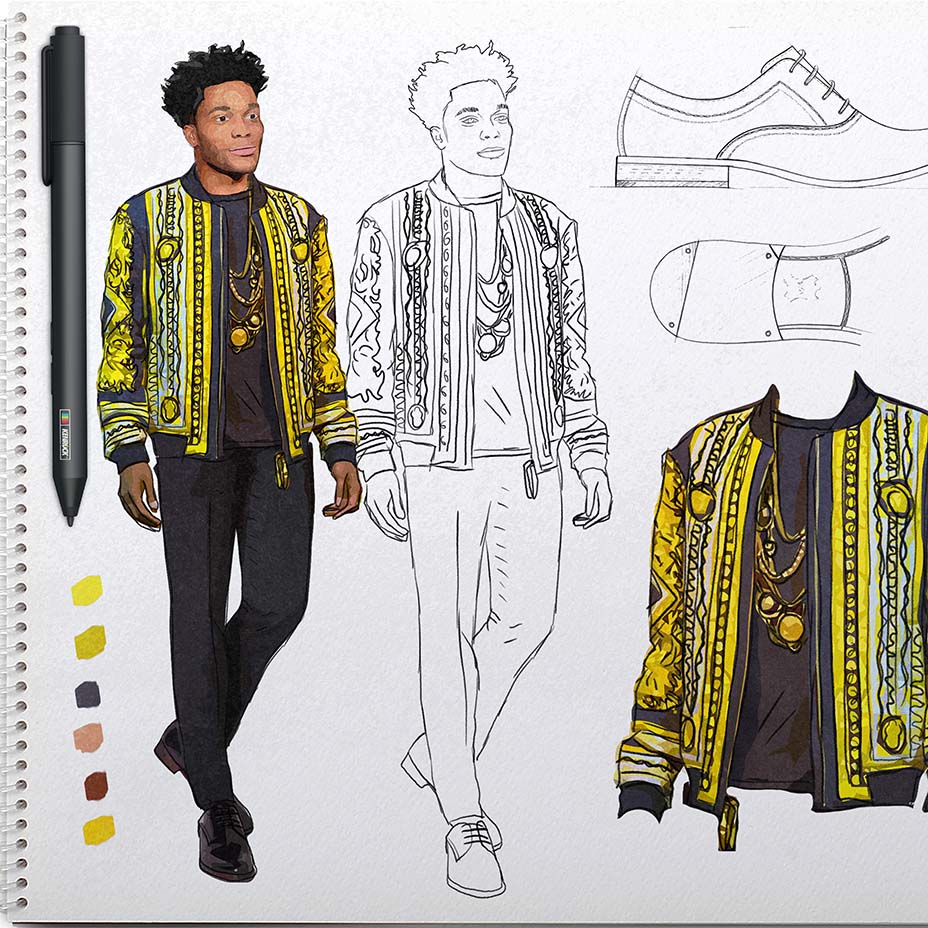 The Oscar-winning costume designer worked with more than three dozens designers on the film,  looking to African and African American creatives such as Palesa Mokubung of Mantsho, House of Deola, Ikire Jones and custom jewels from Khiry, TruFaceByGrace, Aphia Sakyi, and Sewit Sium with traditional gems from Bulgari and Swarovski.

One of the film’s show-stopping dresses is from designer Laurel Dewitt, known as the “Queen of Chain and Metal,” who made a highly creative solid-metal dress that is worn by General Izzi’s [Wesley Snipes] daughter. Indian influences were incorporated with pieces by New Delhi designer JJ Valaya, who is known as the “Monarch of Indian fashion” for his hand embroideries and embellishments. “I was all over the world on this project,” says Carter.

Dressing for both comedy and the continuity of returning beloved characters was also taken into consideration. With Akeem and Seemi (Arsenio Hall) maturing some 30 years, the custom looks were made with stately royal fabrics such as velvets and silks in leafy patterns and embellished with an embroidered family crest. 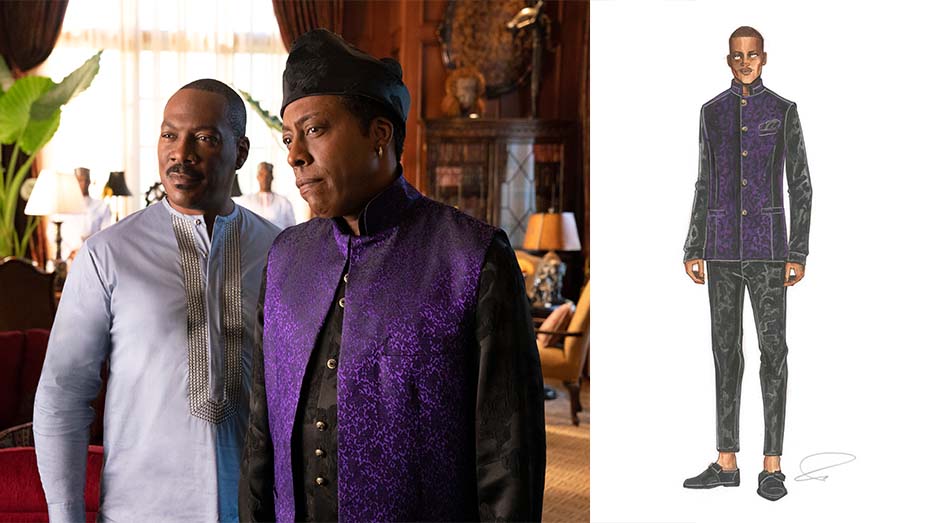 Costumes took a comic turn for Leslie Jones, who we see in all kinds of colors and shapes and outlandish details like the fringe on her turban. Jones also wears a stunning high-jewelry Serpenti diamond necklace by Bulgari. “I wanted to stay in the world of comedy, make it very colorful and keep people happy and laughing. At times it was hard and felt like maybe I went too far over the top. Once the actors got into it, they carried it so well and made it okay to be daring and think outside the box. The actors took it to a higher frequency of humor, and I thought, what was I worried about?!” says Carter. 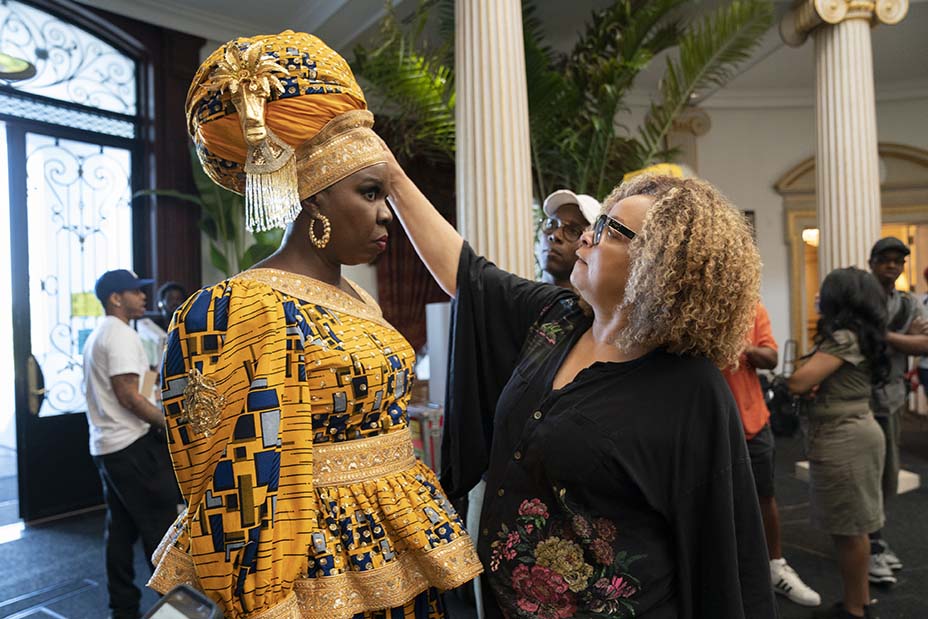 Of the film’s 800-plus costumes, standouts include a wedding dress created by Cameroon-born designer Claude Kameni of Los Angeles-based Lavie by CK (who dressed Viola Davis for the 2021 Golden Globes). “We have a moment that celebrated a glorious wedding gown with one of the largest trains I have ever seen,” notes Brewer. “It was so massive that we had to install two rolling dollies under the train just so the actress could pull it up.”

For KiKi Layne’s Meeka, Carter favored sport looks created by Marusya Kazakova of Brooklyn-based brand Jahnkoy. “The leisurewear shows how you can be athletic, feminine and pretty and wear cool sneakers,” she details. 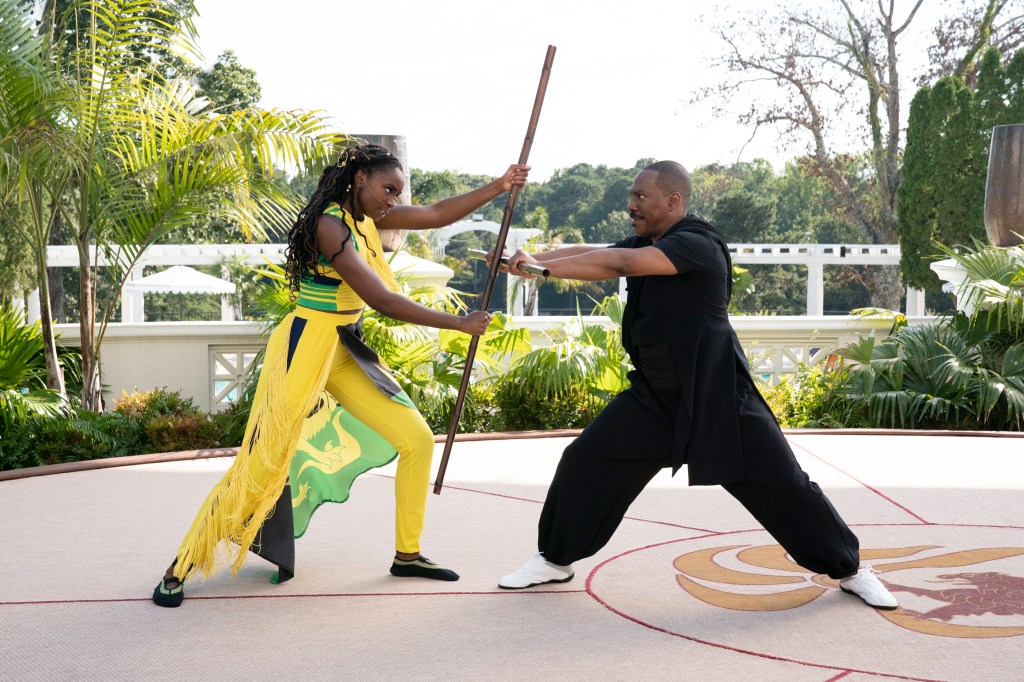 Carter’s work also included dressing the barbershop uniform-clad My-T-Sharp crew and the multi-color attired McDowell employees. “I also loved these Congolese historic etchings of fancy haircuts. I thought I could create them as hats, so you see a lot of the royal men with these very unusual hats on their heads. Hair hats as I like to call them!”