Siegfried Fischbacher, Master of Illusion in Siegfried & Roy, Dies at 81

Siegfried Fischbacher, the ace illusionist who made big animals appear and disappear as one-half of the breathtaking Las Vegas magic act Siegfried & Roy, has died. He was 81.

Fischbacher died of pancreatic cancer Wednesday at his home in Las Vegas, his rep confirmed to The Hollywood Reporter. His sister, Dolore, a nun who lives in Munich, told the German news agency dpa: “I could pray with him and tell him that I will always be with him in my heart.”

Fischbacher’s funeral services will be private with plans for a public memorial in the future, his rep said. In lieu of flowers, donations can be made to the Cleveland Clinic Lou Ruvo Center for Brain Health (www.keepmemoryalive.org).

Roy Horn, his partner in life as well as show business, died May 8 of complications from COVID-19 at age 75. An accident in which a tiger mauled Horn during an October 2003 performance at The Mirage ended their careers.

Employing dazzling theatrics that included extravagant costumes and sets, pulsating lighting and pyrotechnics and feats of illusion, Siegfried & Roy headlined at The Mirage for more than 13 years. At the height of its popularity, the act grossed $45 million a year, making the pair the most successful live entertainers in the history of Las Vegas.

On his 59th birthday, Horn was leading Mantacore, a 400-pound, seven-foot-long striped white male tiger, across the stage of the 1,500-seat theater built and named for them at The Mirage when he stumbled and fell. Mantacore sunk his teeth into Horn’s neck and dragged him offstage.

Some in the audience believed it was part of the act until Siegfried announced that the show was over. Backstage, trainers separated Mantacore from Horn. The puncture wounds were causing him to bleed out, and he had suffered a stroke. Horn would lose most of the use of his left side, and his performing days were over.

The official story was that Horn had suffered the stroke onstage, setting off the horrific chain of events. Instead of blaming the tiger, Horn did just the opposite. “Mantacore saved my life,” he told People magazine in 2004. “He instinctively saw that I needed help, and he helped me.”

The story was framed as an accident that couldn’t have been prevented. But in March 2019, THR‘s Gary Baum spoke with Chris Lawrence, an animal trainer who was working that night, and he said Horn had made several mistakes during the performance.

“Many of the handlers thought that Roy was treating the cats more like props than he was respecting them for who they were,” Lawrence said. “That can only work as long as there are no variables, which is impossible considering that you’re dealing with a living, thinking animal.”

When they weren’t performing, Fischbacher and Horn lived in a sprawling Las Vegas compound nicknamed “Little Bavaria,” where exotic cats roamed freely and Horn would ride on the back of a white tiger.

Fischbacher was born on June 13, 1939, in Rosenheim, Germany. When he was 8, he found a five-mark note on the ground and used it to buy a book about magic, he related in his biography posted on SiegfriedandRoy.com.

Fischbacher performed tricks for friends and family and developed a comedy act for weddings and parties that made him a local celebrity. Helmut Schreiber, a prominent German magician known as Kalanag, was a big influence on him. “It wasn’t so much his illusions that thrilled me,” he said. “It was his personality and the glamour of the elaborate stage sets.”

Fischbacher left home at 17, and after working as a dishwasher and bartender at a resort hotel in Lago di Garda, Italy, he landed a job in 1959 as a steward on the luxury liner S.S. Bremen. When the captain learned that he was an aspiring magician, he gave Fischbacher an opportunity to entertain the passengers. He did sleight-of-hand tricks with cards, coins and cigarettes and swallowed 20 razor blades, only to have them reappear on a string.

It was on the boat that Fischbacher first crossed paths with Horn, a fellow German.

One night, Fischbacher asked Horn what he thought of his act. “Well, the audience really liked you. And it’s great that you can do all those tricks,” he said. “But quite honestly, I didn’t like the show all that much. The magic seems so predictable. If you can make a rabbit and a dove appear, could you do the same with a cheetah?”

When Fischbacher told him anything was possible, Horn took him back to his cabin. Inside was a cheetah named Chico. His uncle had given the animal to Horn, who had smuggled the cat on the ship. The next night, Fischbacher made Chico appear inside a box onstage — and Siegfried & Roy was born.

“From the moment we met, I knew Roy and I, together, would change the world. There could be no Siegfried without Roy, and no Roy without Siegfried,” he said after Horn’s death. 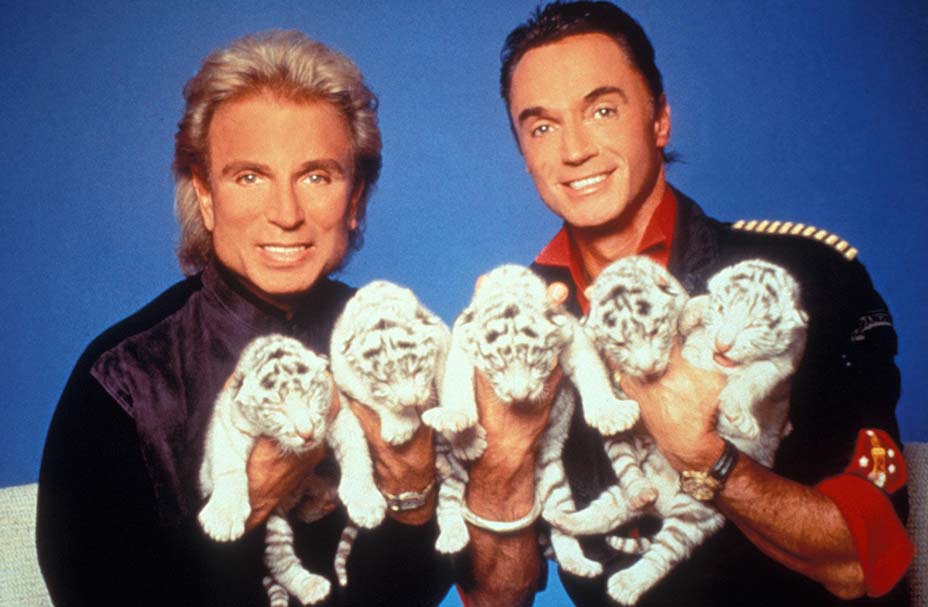 After touring throughout Europe — in Monte Carlo, they performed for the likes of Prince Rainier, Princess Grace, Sophia Loren and Frank Sinatra — Siegfried & Roy made its U.S. debut in 1967 at the Tropicana in Las Vegas as part of the Folies Bergère. They broke out in 1981 with their own show — Beyond Belief at the Frontier Hotel and Casino — that ran until 1988.

Three months after Steve Wynn opened the Mirage, Siegfried & Roy performed there for the first time in February 1990. For 13 years, a giant marquee featuring them and a white tiger loomed large over Las Vegas Boulevard. In 2000, they were named “Magicians of the Century” by the International Magicians Society.

After the accident, Fischbacher and Horn in 2004 debuted Father of the Pride, a computer-animated sitcom for NBC about a family of white tigers whose patriarch (voiced by John Goodman) works in their show. Conceived before Horn’s accident, it aired just 15 episodes.

Siegfried & Roy performed onstage one last time at a 2009 charity event to benefit Las Vegas’ Cleveland Clinic Lou Ruvo Center for Brain Health. Horn made his partner disappear and a white tiger appear in his place. It was later revealed that the tiger was Mantacore. (The cat lived at Little Bavaria before his 2014 death at age 17.)

Together, Siegfried and Roy made quite the combination, the likes of which may never be seen again.

“Siegfried often said that he by himself would not be enough and Roy by himself would be too much,” Lynette Chappell, the duo’s personal manager, said on the 2019 ABC special Siegfried & Roy: Behind the Magic. “But to me, it’s like thunder and lightning.”