Gal Gadot’s mid-December appearances for the global premieres of Wonder Woman 1984 should have ranked among 2020’s most high-profile red carpets, drawing a phalanx of photographers shooting images instantly transmitted around the world. But COVID-19’s shutdown of public events didn’t faze stylist Elizabeth Stewart, who created multiple images of Gadot, dressed in gowns by Valentino and Versace, for a virtual press tour that went viral even without traditional step-and-repeat backdrops.

“It’s really fallen to the glam teams to create and disseminate red carpet moments for the world,” says Stewart. “[Stylists] Wayman & Micah led the way with Regina King by shooting her Emmys look on a rooftop.” For client Gadot’s press tour, says Stewart, “I took most of the photos, while hair and makeup were working. [Hairstylist] Mark Townsend brought in lights from home, and we set up a little studio against a curtain, or we would run out on the balcony.” 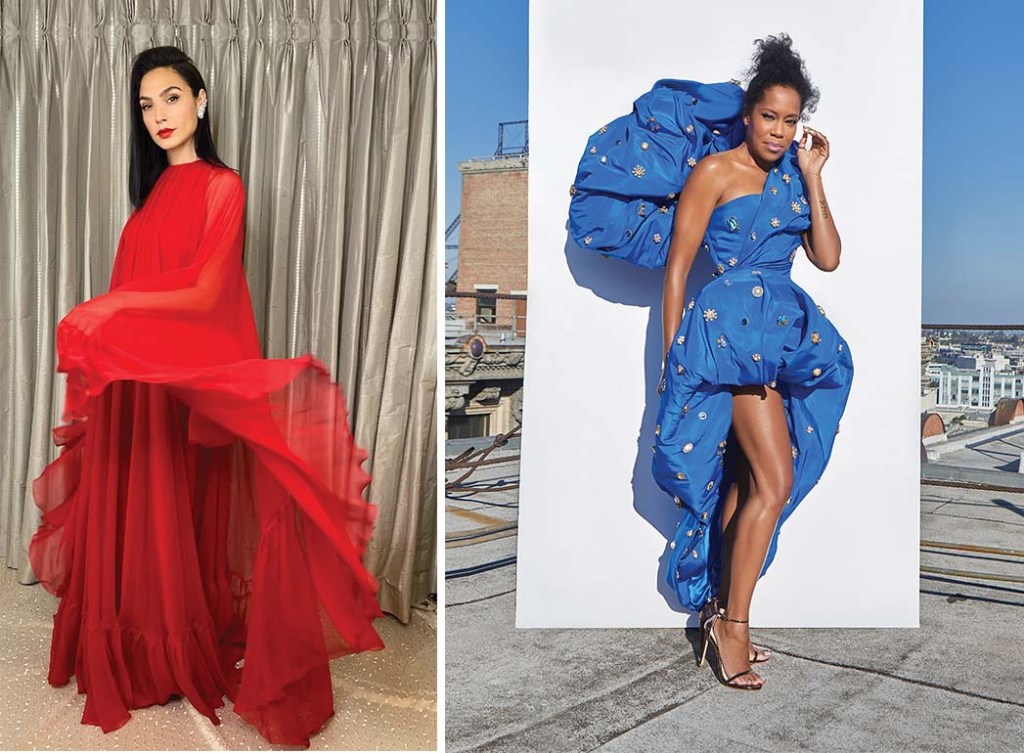 “Elizabeth does everything at 11,” says fellow stylist Jeanne Yang. “She’s one of the best in the business, and she’s going to be as innovative and aware as possible for what needs to be done for both the designer and for Gal to ensure they both get the best coverage.”

King, who wore an electric-blue Schiaparelli gown for the Emmys, was photographed on the aforementioned rooftop against a white scrim by Los Angeles-based photographer James Anthony. A month later, stylist Apuje Kalu contacted Anthony to shoot Insecure‘s Jay Ellis, a presenter at the Billboard Music Awards. “James and I are friends, and I had to tell him there was no rate for this, because our budgets don’t include money for photographers,” says Kalu. “I’m calling in favors to ensure we’re creating images everyone can use, the brands included.”

Taken at his home next to his pool, the resulting 180-degree image capture of Ellis, wearing a Dzojchen suit, David Yurman jewelry, and Christian Louboutin boots, has garnered more than 275,000 views on Instagram. Ultimately the favor paid off: Dick Clark Productions took note and hired Anthony to create similar images of celebrities for November’s American Music Awards.

When you gotta do the red carpet at home… #BBMAS2020 pic.twitter.com/fWFE69ZISv

For many stars now, budgeting a photographer to document a red-carpet moment is a necessity. When Kalu worked with Yvonne Orji, an Emmy nominee for Insecure, the actress booked photographer Wendell Weithers to take rooftop images of her wearing a red Azzi & Osta gown in Atlanta, where she was on location filming the upcoming Vacation Friends for Hulu. “The nomination was a moment Yvonne had been waiting for, so she was going to go all out with her look and make sure it was captured,” Kalu adds.

Stylists agree that, with no sign of red carpets returning for the foreseeable future, every brand is appreciative of their extra efforts. “We’re all just trying to make a living and trying to make sure we help designers and PR showrooms get the coverage they need,” says Yang, who recently worked with Jamie Dornan on his virtual press junket for Wild Mountain Thyme. “Each of us is only as good as the resources we have access to, and if we can’t support them, then no one is going to succeed.”

A version of this story first appeared in the Jan. 6 issue of The Hollywood Reporter magazine. Click here to subscribe.